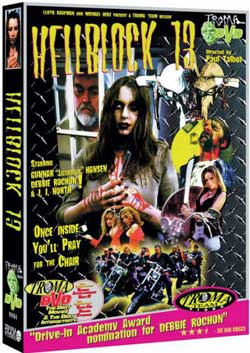 Welcome to Hell Block 13 a special cellblock reserved for death row inmates. The executioner makes his rounds checking on each of the inmates eventually he stops upon the woman Tara. Tara is a strange and violent case herself, a convicted serial killer. Tara’s life on Earth will soon be over as at midnight she is supposed to be executed, in the mean time however she is more than happy to share some of her stories with the executioner. These stories are indeed strange however since Tara claims they were told to her by the spirits inside of the cell.

“I am the right hand of God, and your gateway into Hell!”

Paul Talbot’s Hell Block 13 is a great throwback anthology film once again put out by the fine folks at Troma entertainment. The film starts as the executioner played by Gunnar Hansen (The Texas Chainsaw Massacre) who is sporting some very long hair and is checking on various female inmates of a prison. He is disgusted with each of them and he makes it quite known. When he arrives at a woman name Tara’s cell he is immediately hit in the face with the woman’s food tray, it is a very comical moment and I personally replayed the scene several times before moving on.

Tara is scary case indeed, she is a convicted serial killer and she demands to see a copy of the news paper to see if there is any news about her death. She is disgusted when she does get a hold of the paper and find out that they are essentially still just saying the same things about her. The press has dubbed Tara the “white trash witch” and claim that she is an illegitimate child of Charles Manson. Tara also shows disgust that the same picture of her was constantly used. She proclaims that the prison wouldn’t let a real photographer into the prison to take new pictures of her, the woman seems to relish in her notoriety. Thus begins the wrap around segment of Hell Block 13.

It is only a few minutes later that Tara pulls out a book which she has written. She proclaims that the book contains stories that were told to her by spirits within the walls of her cellblock. She asks the executioner if he would like to hear one, the man figuring that he has some time says why not and right way the viewer is thrown into the first segment of the film.

The first segment of Hell Block 13 is titled Watery Grave and it is a nice little throwback to the EC comic fables of the 1950’s. Sherry is a mother who is currently at the police station being questioned about the disappearance of her children who were abducted from the local park. The police are startled by how calm Sherry is and the fact that there were no witnesses at all that even saw her or her children at the park. It is revealed that Sherry has a new boyfriend, a younger man who is even disturbed by Sherry’s lack of concern about her children. Little do they all know that the children are actually a lot closer than everyone thinks?

The story basically revolves around several really good atmospheric scenes where music and camera work build up some tension. The ending once again treads into the EC territory with some decent make up. Of all of the segments in Hell Block 13 this is the closest to the old style one might associate in an anthology film.
The next segment in Hell Block 13 picks up quite a bit and is titled White Trash Love Story. The story centers on a wife who is abused by her husband Joe Mark. With a title like White Trash Love Story it really is no surprise when the viewer finds out that the story takes place in a trailer park. The story is full of chuckles, one scene in which the battered woman claims that she is going to go stay with her mom for a while causes Joe Mark to cry out “Please don’t move back next door!” which got quite a few chuckles out of me.

It is only a few scenes later that the woman finds out that right next door to her lives a witch who could possibly help her with Joe Mark’s abuse. David G. Holland relishes in the role of Joe Mark and really does make the most of the segment which once again like the old style comics there is a twist only this time it isn’t as happy as some would imagine it to be. Of all the segments in Hell Block 13 this certainly is one of the most entertaining and does contain a pretty funny decapitation scene.
The third and final segment in Hell Block 13 is a segment titled Big Rhonda. The story centers around a group of bikers who are on a drug run and just like they have done every time they take the trip they stop to pay their respects to their patron deity.

Big Rhonda is definitely has some of the most “wtf is going to happen next” moments in the film. There were several points during the segment where I seriously was wondering what was going to happen next. You see big Rhonda is a deceased outlaw biker babe and to pay respect the gang digs her up and proceeds to have a party, because Big Rhonda has always watched out for the gang to make sure that the police have never caught them. The segment is full of some pretty good makeup and FX sequences, eye candy and humor.

Between each of the stories in Hell Block 13 the viewer is once again thrown into the wrap around segment in which the executioner and Tara discuss the past story and what leads into the next one. The ending of the film doesn’t let down as once again Tara’s last request isn’t answered so she comes back to make sure that it is.
In all Hell Block 13 is a great party film full of lots of eye candy and gore, it really does make me miss the style of films that were released in the 1990’s. Fans of anthology films and indie films of the 90’s really do need to check this one out, and yes it does belong in your collection as well. You aren’t going to walk away educated from this one, but you will walk away with a big smile on your face.