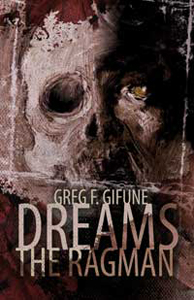 As a young boy Derrick listened to his grandfather’s spooky tales of “The Ragman,” an old junk dealer and boogieman of sorts to the children in the neighborhood who he claimed had followed him throughout his entire life and stalked him from the depths of his own worst nightmares. But as an alcoholic ravaged with senility, his grandfather’s stories were dismissed as delusions.

When years later, murder comes to Derrick’s small hometown, he and his best friend Caleb—both teenage outcasts—discover that the killer is a hobo dressed in rags who rides the rails in and out of town when committing his crimes. They dub him “The Ragman” unaware of just how accurate that nickname may be, but the murders are never solved.

As time passes, Derrick weds and settles into a troubled marriage while Caleb moves to New York City and spirals into drug addiction and madness. Thirty years later, in a dying seaside resort town, the killings have begun again. Has The Ragman returned, or is something even more sinister taking place?

As Derrick and Caleb meet at the scene of the latest grisly murders, they soon find themselves confronted with an unsolved mystery that has haunted them for decades and an eternal evil they may never be able to escape. The rain falls, darkness descends, a train’s whistle blows, and the Ragman begins to dream…

There has been much praise thrown Greg Gifune’s way and it is well deserved. His fiction is dark, deep, disturbing and original. He is one of the finest practitioners of dark fiction of ours or any generation .

His latest book “Dreams The Ragman is a taut, decadently disturbing vision that will leave you shaken. Gifune’s fiction can’t be relegated to a genre, though it could be pointed out that he is a genre unto himself.

It delves deep into the human soul, blending a tale of a lifelong friendship, a broken marriage, drug addiction and courage into a tale that will have a profound effect on those that read it.

His characters seemingly jump off the pages, drawing you in to their world, experiencing their joy, sorrow, pain and suffering. The atmosphere is dark and depressing, his prose sharp and unsettling.

“Dreams The Ragman” will leave it’s mark well after you turn the last page. You will know fear, you will know pain, but you will also know the joy and tribulations of a friendship that has spawned decades that culminates in an ending that will leave you gasping.

Greg F. Gifune is a talent that should be savored and celebrated. “Dreams The Ragman” is a book that is a must read for any book lover regardless of your favorite genre and I give it my highest recommendation.