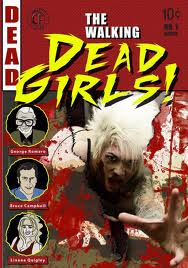 The Walking Dead Girls is a behind-the-scenes look into zombie culture in the United States and the obsession into “”Sexy Female Zombies””. What is it about Zombie Bimbos or “”Zimbies”” that are starting to gain the worlds interest? Why are zombies now in mainstream culture and seen in advertising from JCPenny and Sears? With interviews with zombie master maker George Romero and cult movie star Bruce Campbell from ZomBcon 2010 and so much more. Also with a rare look into the making of a Zombie Pinup Calendar, behind the scenes of “”Stripperland”” and “”Clublife”” Daniel Baldwin’s hip hop Zombie music video debut. “”The Walking Dead Girls”” is a sexy look into the zombie phenomenon created by George Romero that is 40 years in the making.

The Walking Dead Girls isn’t so much a documentary as it is a film that explores some of the reasons for the recent explosion in the popularity of all things zombies. It’s basically one interview after another as we hear from Lloyd Kaufman, George Romero, Linnea Quigley, Bruce Campbell and of course several lovely ladies from the Zombie Pin-Up Calendar. It’s interesting to say the least all of the different takes on the subject and how a lot of them got started in the horror genre.

Like any film of this type, some interviews are better than others but I have to say that on the whole they are very strong. Zombie lovers will probably enjoy this the most but for aspiring filmmakers there is some wonderful insight as well, especially when Lloyd Kaufman is interviewed. For us general horror fans, it’s neat just to sit and listen to the thoughts from these icons of the sub-genre.

And what better way to start the film than with an interview with the godfather himself, George Romero. Some of the stuff he says you may already know like how he really sees his films as social and political commentary more so than a zombie film. In fact, he views the zombies themselves as mere annoyances in the plot and much more enjoys showing the back and forth struggle of the survivors and how they are adapting. On the genesis of Night Of The Living Dead he imagines the fallout of a failed revolution and in describing that he delivers not only the best line of the film, but maybe one of the better lines I’ve heard in a awhile. He wonders what it must have been like for the “sixties people that were sort of pissed off that peace and love hadn’t worked.” Priceless.

Lloyd Kaufman delivers some great insight into the modern nightmare that is today’s distribution process by giving a brief history of the whole process. After hearing it I have to tip my hat off even more to the indie filmmakers of the world that are trying to get their films noticed. He also speaks rather candidly about not being able to afford union actors and because of that the talent pool is not as large which can make things difficult.

Interesting to hear from actors like Boyd Banks, Linnea Quigley and the Ladies of The Evil Dead mention that for them their first films were done not so much due to a love of the horror genre but mostly because it was a job. Quite simply, actors need work. Along with Lloyd Kaufman I have to say it was really refreshing to hear them speak honestly about their careers.

Silly questions abound throughout but it’s fun to hear the responses. Do you like your zombies fast or slow? If you were a zombie which would you prefer to satisfy your hunger, brains or flesh? What is your favorite method to kill a zombie?

Interviews with the various zombie pin-up girls are more filler but fun nonetheless. It’s cool to see some of the makeup being applied for the photo shoots and watch as these otherwise pretty women get transformed into the living dead. What’s really funny is when they laugh and smile after they have been turned into full fledged zombies and you see, yep, perfect white teeth.

You can tell they are all having an absolute blast and in the end that is what makes The Walking Dead Girls fun. If zombies are your thing and you just can’t enough of them then you’ll want to try and catch this film. For some fans it will be a nostalgic trip as you get to see some of the actors from movies past. For others still, a chance to hear and understand some of the struggles and politics of what goes on behind the camera. I wouldn’t rate this a purchase as after you’ve seen it once, what more is there to hear? All in all a fun little film that will have you wanting to watch the next zombie movie that comes on the television which, as the film points out, probably won’t take too long.