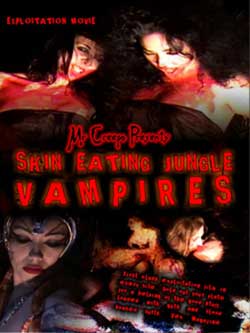 Bringing exploitation back into the movies with this racy saga of the Clitorians – a group of lusty aliens who inhabit a “Lost World” inside a volcano. While they await the arrival of their Dark Lord, the Jungle Vampires stay eternally young by feasting on the flesh, bones and blood of unsuspecting tourists. Their latest conquest is the sweet young, Tiffany, a sorority cheerleader who disappears in the Costa Rican jungle during Spring break. In hot pursuit is her sister Carla, who is psychically tuned into the younger sibling’s plight and must rescue her before she is digested as jungle stew.

I’m not sure what I just watched. The one thing I do know is that I’ve never seen anything like it, but that doesn’t necessarily make it a bad thing, either. For pure exploitation and from the perspective of it is what it is, this movie isn’t entirely all bad. Is it one of those so bad it’s good? Honestly, I don’t know. Part of me wants to say yes, the other a resounding no. I hate to be on the fence but this is one of those films, even knowing that it is a pure B-movie exploitation affair, you’re either gonna like or absolutely hate.

Maybe the above synopsis tells it all, which I admit gives me a chuckle. Maybe knowing that the film is brought to you by Mr. Creepo will tell you more than you need to know. It easily could have been titled Skin Eating Blood-Smearing Lesbian Jungle Vampires but try marketing that one. In the end, what you have is a movie that is ripe for a MST3K skewering, but watching the first ten minutes will let you know the filmmakers are one, well aware of that fact and two, could really care less.

The movie starts out in the heart of the Costa Rican jungle where Tiffany, our young sorority cheerleader, is being chased by a group of women, or more accurately Skin Eating Jungle Vampires. It doesn’t take long before they catch, attack and capture her. Or maybe that should read catch, grab, fondle, spank and capture her. At any rate, it is one weird scene and when coupled with the opening credits and narration will give you a really good idea about whether or not you’ll want to continue watching.

Cut to Carla’s apartment where she finds out that her sister, Tiffany, has gone missing. No one has heard from her and that is unusual. On top of that Carla has a telepathic connection to her sister and just knows that something terrible has happened. So she jumps the next plane down to Costa Rica, hoping to enlist the help of a local shaman that just happens to be a friend of her mom’s maid. Talk about connections!

Once she arrives, she does what any good sister would do when searching for her lost sibling. She grabs her swimsuit and takes a slo-mo dip in the hotel pool. I mean hey, this is beautiful Costa Rica after all, the sun is shining and the beaches look inviting. Even worried sisters need a little rest and relaxation, too. The next morning we find Carla hitting the beach to do some frolicking in the ocean in her string bikini. This girl knows how to pack for a family emergency, let me tell you.

Eventually Carla decides she better start looking for Tiffany and tracks down the shaman. From here the movie stumbles along as her search leads her through the jungles of Costa Rica and finally to a volcano where her sister is being held captive. At one point you even get a wonderful B-movie subtitle, “Meanwhile at the volcano, deep in a hidden cave.” 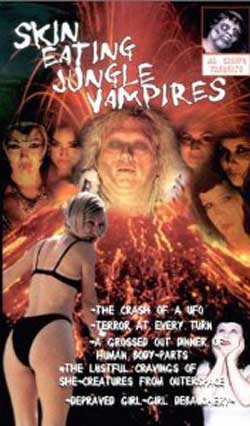 In a way it would almost be unfair to comment on the acting in this film. Of course it’s not up to par with pretty much anything but by golly you can see they are giving it their all. The blood and gore is actually quite plentiful but not in the way one would usually find. Suffice it to say it seems to be a key component of their rituals, which usually involves a lot of groping and kissing and well, blood-smearing.

Skin Eating Jungle Vampires is definitely a movie that is not for everyone, heck, probably not for most, but at its core is most definitely unapologetically exploitive, and that is really the point. If you can catch this one for free, see it once, but only if you really love exploitation B-movies. There is value here, but really only for diehard fans of this particular sub-genre.