Laura is supposed to babysit her little brother all weekend, but plans change when two studly high school graduates invited her and her best friend on a weekend adventure. Dragging her brother along, the five of them head to the woods for a killer camping trip. But the party of their lives is about to get cut short.

Over the last several years, there have been a handful of horror films to come out that pay homage to the films of the 80’s that set the precedence for how we judge the films we watch today. “Blood Junkie” is just that type of film, except that it tributes the low budget treasures we discovered during the video age that were silly and shot on video. Actually, many of those little treasures were released by the legendary Troma Team Video. “Blood Junkie” was picked up by Troma and released to DVD. With a budget of just $7000, writer director Drew Rosas, just threw everything in there. Every possible 80’s cliché appears, from the type of clothes, the dialogue, and even the music. “Blood Junkie” doesn’t quite work as a horror film, but I admit that two of the films’ main characters were pretty damn funny and there was plenty to enjoy in the its’ slim 72min runtime.

Laura (Sarah Luther) is given the task of watching over her little brother Andy (Brady Cohen) while their parents are away for the weekend. They have a stash of emergency money that she is ready to spend on booze. She calls up her friend Rachel (Emily Treolo) and they head off to the store to find someone to buy their alcohol. In strolls Craig Wilson (Nick Sommer) and Teddy Bender (Mike Johnson). Craig Wilson is good to go and ready for anything. Moments before, he was putting his moves on Teddy’s mom. They get the girls, along with little Andy, to go camping with them out in the woods. They hang around the campfire telling stories and attempting to score till the sun rises. What they don’t know is that there is someone or something in the woods in the old abandoned building that has been waiting for the right moment to teach them all a lesson. 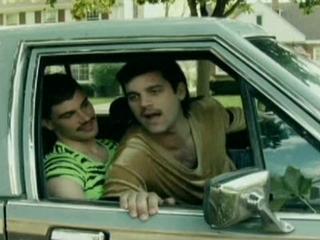 The one thing that I really need to commend the filmmakers’ on was that they made this little $7000 movie in 2010. The film is set in 1989 and it seriously feels like it. If I hadn’t known it before watching I would not have known the difference. Everything from the sets to wardrobe were just spot on and hilarious. They nailed that ridiculous feeling of early Troma fare like “Redneck Zombies”. After the opening death scene, nothing happens again until the films’ final 30min. That was a major weakness and at the same time, Craig and Teddy were a pretty damn funny distraction. They have some great moments, most notably the celebration montage when the gals agree to go camping with them. The ladies were far less entertaining. They spend the majority of their screen time giggling and talking about how retarded Craig and Teddy are.

I liked Craig and Teddy so much, they should end up in some sort of sequel or spinoff. Just think “Bill and Ted” or maybe even closer to “Dean and Terry” from the “Fubar” films. Both actors were way over the top and in scenes where they are messing around with each other, the onscreen chemistry is prevalent. If there isn’t a t-shirt with them on it that says something about the “junkies”, maybe there should be. What makes the film work is that the filmmakers knew what they were making. This is just a silly movie where everyone involved was just there having fun. It is a feeling that quickly rubs off on the audience and you can’t help but enjoy this charming little flick. I am a child of the 80’s so I can really get in to the references and the style of that era. I can laugh at it, I remember it, I even lived it. It has been many years since I watched a Troma release that I really enjoyed (not counting the films Lloyd Kaufman directed himself). “Blood Junkies” is bloody good fun and well worth shooting up with. 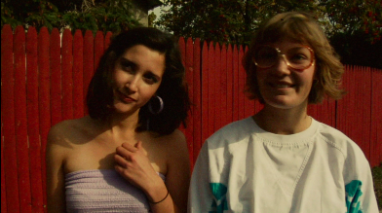