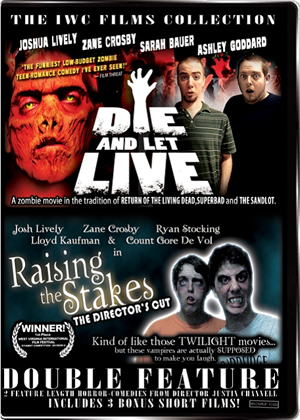 SYNOPSIS
A pair of high school nerds, Steve (Josh Lively) and Bob (Zane Crosby), decide to take their role-playing too seriously walking around in goth make up and clothes pretending to be vampires. When no one takes them seriously, they resort to purchasing a mysterious potion that promises to turn them into children of the night – to make them immortal. Once they have supernatural powers, they find that nothing really changes for them and now they only have four days to drink the blood of their first kill or they will perish.

REVIEW
Raising the Stakes, from director Justin Channell, is a charming, but adolescent, low budget independent film that is full of enthusiasm and heart. It still struggles to get over the cast and crew’s inexperience but the results are promising and entertaining. The film manages to eek out a resemblance to early Kevin Smith films and leads Lively and Crosby make for a low rent Jay and Silent Bob. They’re goofy and amusing creating a likable and watchable pair of heroes. The film itself is difficult to sit through at times, with its wooden acting and amateurish film-making, but it manages to stay on track for its entire length (around 70 minutes) and never looses its characters or settings – a feat many Hollywood films fail to do. 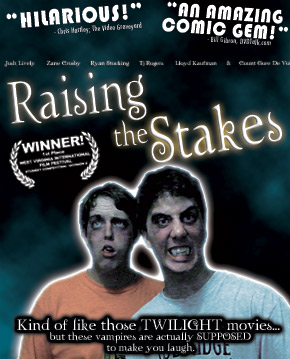 The strength of the film lies in the two lead actors, Josh Lively and Zane Crosby. Their antics and close bond overcome their inexperience in front of the camera. They make for an entertaining comedy duo and display good timing and delivery. Above all, they show lots of promise. With Raisig the Stakes, they’re still a bit more on the silly and sophomoric side. 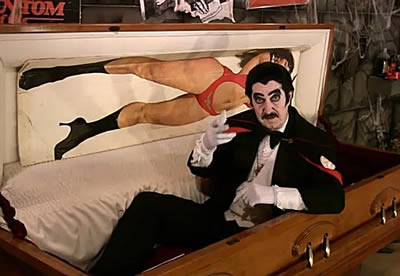 The rest of the cast do not fare as well and are obvious friends of the director or possibly Lively and Crosby. At times, Raising the Stakes plays like a high school drama, but manages to peak from time to time. The fact that it remains cohesive and focused says a lot for the production and provides a glimpse of what might be on the horizon for these young film makers. The film also has cameo appearances from Troma’s Lloyd Kaufman and the great Count Gore de Vol, both of which are comedic high points in the film and are incorporated well into the storyline.

While it is hard to recommend Raising the Stakes to the average horror fan, there is a crowd that can enjoy and appreciate the film and its accomplishments. If you are a young horror fan who wants to makes films, this is a good example of what can be done with an enthusiastic cast, very little money and blind ambition. Raising the Stakes is a harmless, goofy, fun horror film staring a pair of promising young upstarts.