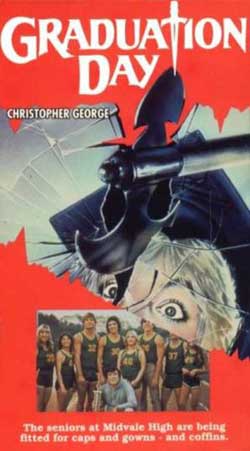 High school can be murder, especially for members of a Midvale High’s track team. The star runner Laura makes a 100 meter dash in thirty seconds, but falls dead after she crosses the finish line. Now someone is taking out all of the rest of the track team one at a time, will the killer be caught before graduation day?

“Ah, f*ckin’ graduation day. They make a big deal out of it, like it was somethin’ special or somethin’.”

I remember seeing this movie on video shelves when I was younger and eventually it was one of the selections that were brought home to view with the family. Graduation Day was released in the heyday of the slasher film, and it actually does bring some new ideas to the table. Graduation Day however suffers from an extremely low budget, incredibly bad acting, really bad lighting (whoever said that he shots looked good really needs to be shot), shoddy special FX and a strange seven minute music video in the middle of the film (I’ll explain more of that in a bit). It does however bring us a young Vanna White and the always wonderful Linnea Quigley, who once again exposes herself for the sake of genre films.

The story behind Graduation Day is really a simple one. The film starts with a really cheesy montage of 80’s synthesizer driven rock, the song’s lyrics are about being a winner. While this song is playing there is footage of teenagers at a track meet, the camera cuts from the teens to the cheering crowd while the song plays. Suddenly there is the 100 meter dash, a young girl comes out in the lead and is running crazy, the track teams coach stands there with his stop watch yelling “30 seconds!” The young girl, named Laura, crosses the finish line but then collapses dead. It is revealed that the reason she died was because of a blood clot in her brain.

Flash forward to the end of the year, graduation day is near and it seems like everyone has forgotten all about Laura. Laura’s sister Anne however hasn’t, she has returned to town on leave from the Navy to watch the graduation ceremony. Kind of strange phenomena though, you see once Anne comes into town members of the track team start dropping like flies. After each member of the team dies we only see a single hand X them out of the yearbook picture with a stick of pink lipstick. Anne having been in the military is cold, she isn’t welcomed at home and she doesn’t take any crap especially from dirty perverts who are giving her a ride home.

The plot behind Graduation Day is easy to figure out, high school kids being high school kids being killed by an unknown stalker; and it all happens in one day/night. So I want to talk about some of the characters that fill the film. The high school principal, Principal Guglione is a spastic angry troll of a man. He has a secretary to which he refers to as “Blondie” when he isn’t assigning Blondie more work to do he is screaming at her orders to explain that he isn’t here. When the kids on the track team start to come up missing he refuses to speak to the concerned parents on the phone, and he really doesn’t want to deal with the police. Principal Guglione has some funny scenes, especially the rehearsal where his microphone cuts out so he just steps out in front of it and starts yelling at the rather small graduation class (again this film is low budget).

Another fun character is of course Coach Michaels. Coach Michaels is the kind of the coach that high school kids hate; he pushes the teenagers to the brink. He knows what his kids are capable of and he tries to bring it out of them the best way that he can, unfortunately the best way for him involves screaming and yelling. There are several scenes showing the coach’s behavior most of them involve a photographer for the paper who watches frightened as the coach yells at the teens, but smiles as if he is in love when they perform correctly.

The killer in the film is not revealed until the end, all one really does see is a pair of shoes and a gloved hand holding a stop watch, after each of the murders the killer stops the stop watch at thirty seconds. Needless the say Herb Freed does do a good job of setting up several red herrings as to who the killer really is, for some of the film one would easily see it being Coach Michaels, then there are a few scenes that make you think it is Anne and even a scene or two that make you believe that the killer is Principal Guglione.

One of my biggest pet peeves with Graduation Day occurs during a party, since it is the 80’s the party is of course held at a roller skating rink. A band is playing on the stage, in full 80’s androgynous makeup (the one member looks like Boy George), this band is called Felony and I guess they agreed to let the makers of Graduation Day use their song, if they shot a music video for it, and of course this music video happens to come on in the middle of the movie (and be seven plus minutes long and continue to simply repeat itself for that seven plus minutes). During this scene we are treated to the murder of two of the teenagers, including Linnea Quigley. The two murders take up maybe a minute and a half of this sequences time, and even then the FX is laughable at best as the killer slices off the victim’s heads. We are however treated to various shots of the band Felony staring at the camera and in general looking as if they are in a music video. The entire scene plays out way too long and really does upset the mood of the film, I’m still curious as to why the whole thing ended up in the film in the first place.

Let’s talk about the deaths though, that is after all the main reason most of us watch slasher films. We see a rather funny throat slashing gag where the blood splashes onto the camera, a girl gets stabbed by a fencing foil (oh yeah for some of the scenes the mask the killer wears is a fencing mask), a member is stabbed in the gut with a javelin shoved through a football, a guy is practicing his pole vault when he falls on a bed of spikes and some peoples heads are taken off. Where Graduation Day succeeds though is in its “already been done before but still overly creepy” ending. I’m not going to ruin it for you, but yes you have seen it before and it is still very creepy and leaves the viewer kind of nervous after witnessing what could have been the most unintentionally funny addition to the slasher cycle of the 1980’s.

I recommend Graduation Day to the fans of the mom and pop video shelves who remember seeing its cover back then, thank you Troma for once again bringing this film out to the masses. Take it with lots of friends and lots of beer, and skip the part where Felony plays (except the last few minutes cause that’s when Linnea Quigley gets her head removed), and you will be rewarded with a glimpse back to the early days of the American slasher film.