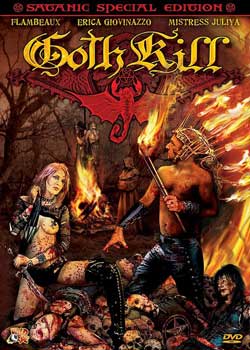 When Catholic Priest and Inquisitor Nicholas Dread finds out that innocents are being burned as witches he decides to do something about it. Unfortunately for him, his superiors don’t agree and he’s burned at the stake alongside two women he forced confessions from. While dying, Nick curses god and makes a pact with Satan to reign over his own kingdom someday at any cost. Now, in 21st century New York City, Dread has returned to finish the deal. His end of the bargain with Satan must be fulfilled, and many will die so Dread can take the throne in his kingdom of over one hundred thousand corrupt souls. He just has to find the right bunch of victims…and it just so happens the best Goth Club in the city is ripe for this bloodthirsty butcher bent on revenge! Can a group of Goths and wannabe vampires hold their own when the real thing arrives?

Gothkill is a name that demands attention. Well that is if you are a goth. No mysteries here though about what the film’s about. That’s what I like….. straight and to the point. Before we get into the story and such I took some time to investigate the extras on the disk out of curiosity. It appears that this film has become its own little niche of late night showings combined with gothic, fetish and bizarre acts displays. Kind of like a circus of freaks. But that’s ok, I love to see filmmakers that can take the art into a much bigger purpose and blend it with the community. JJ Connelly has done just that. And for what its worth even with its limited budget it has some unique takes and directions to the story.

Our film Gothkill comes from the new player on the block Wild Eye Releasing. From what I can tell they are handling the odd man out bunch of films that they can get their hands on and bringing them straight to your living room. Gothkill is one such film. A production that is obviously low budget and features mostly bad acting does have its appeal. One such appeal comes in the way of Nick Dread played by a fellow named Flambeaux.

Flambeaux is the most dynamic of the bunch and from what I can gather the most appropriate choice for the role. The intention was to build a franchise off of his character but I’d just stick with the statement that he is entertaining to watch. The other 2 main characters of the film are Kate (Eve Blackwater) and Annie (Erica Giovinazzo). Erica is the virgin gone goth gone demon who gets the pleasure of being possessed by Dread’s spirit. Uniquely her presence and appearance goes from really hot to other shots where she looks like a man (due to the Goth makeup) but none-the-the-less she has fun with her role and it shows.

Ok, so we begin with the delusional leader gone demonic who gathers his followers for the purpose of worshipping him and then proceeds to kill them all off like fies per machine gun. As we are taken further, we learn that Dread was actually a religious monk of sorts that held roots in Christianity. From distaste for the inquisition and its false lies and accusations he is “also” burned at the state like so many other during that time. Though Nick strikes a deal. His deal is that if he delivers 100,000 souls he will reign over them in hell. Thus begins a serial madman who acts on these wishes and takes all of them with him. At present, Annie and Kate are anxious to make there way into the heart of the Goth scene.

This leads them to the underground goth circle of the Scorpion Society. Led by Lord Valencia (Michael Day) an actor who’s way to old to be playing with whiteface and lipstick heads this underground circle for his own gain and pleasure. The film which is marketed slightly as a horror comedy actually plays tribute and pokes fun at the Goth scene. FX are cheaply done with cutaways, simple props and mouthfuls of blood as well as a horrendous fight scene that’s hard to take real seriously.

Ultimately this a goth film disguised as a horror film. What do I think? It’s Gothy! Above all though the idea of a spurned soul gathering other souls to reign in hell is a pretty cool idea. The idea comes full circle in an ending which the film wouldn’t have survived without. Even with the obvious green-screening it has its charm and is fun to watch. My favorite portion is the handmade headdress which Dread wears that looks like an iron Indian piece set aflame or something you’d see in a Kiss concert. Great prop!

For viewers, you know now that it’s a limited budget piece, but folks seem to really take to this film for what it is. 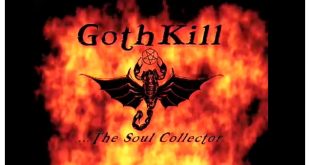 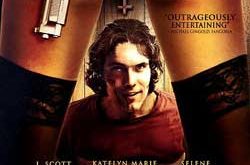