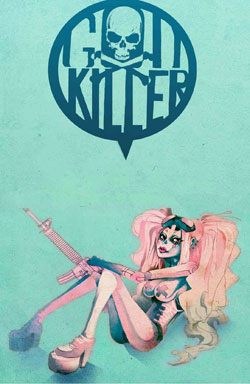 In the future Earth is a much different place. There has been a nuclear holy war, an economic crash and to top it all off alien races have now began to populate the planet. The harshness of the planet has made it difficult to obtain fresh organs for much needed surgeries resulting in prostitutes becoming organ thieves. A young boy named Tommy needs desperately to find a new heart for his kid sister Lucy and his journey just begins when he follows one of the above mentioned prostitutes out into the outer city.

Synopsis: In the future Earth is a much different place. There has been a nuclear holy war, an economic crash and to top it all off alien races have now began to populate the planet. The harshness of the planet has made it difficult to obtain fresh organs for much needed surgeries resulting in prostitutes becoming organ thieves. A young boy named Tommy needs desperately to find a new heart for his kid sister Lucy and his journey just begins when he follows one of the above mentioned prostitutes out into the outer city.

“What’s a body worth these days after all?”

I had no idea what I was in for when I sat down to watch the screener for Godkiller. I had no prior knowledge of the project so I sat down and got ready for something new. Not only did I get something new I got something different and kind of cool at the same time.

The first thing I noticed about the film was the cast. While watching the credits at the beginning one can’t help but to notice the names Lance Henrikson, Danielle Harris and Bill Moseley. The names on the screen then go on from the genre legends to also throw out Lydia Lunch and Davey Havok, both musicians and both have made notable appearances in genre pieces over the last few years. I couldn’t help but to start being excited.

After the credit sequence the film begins. Godkiller is an animated film, but it’s not done as a cartoon. Godkiller comes off more like a radio program with some eye candy on the screen that moves, slightly to emphasize what is going on. For instance in one scene the viewer can easily hear a prostitute brushing her teeth or keeping the toilet clean as she refers to it. On the screen though is simply a picture of the young prostitute spitting into the sink.

Godkiller starts by introducing the viewer to just exactly what kind of world Earth has become. The main character talking is an old man named Dr. Mulciber who feels that he has outlived his generation. He has taken part in the nuclear holy war that has left much of the planet useless. He makes his way into a brothel that he frequents; he admits to the viewer that he has been her hundreds of times. On his way into the brothel he is checked for weapons and forced to wear an inhibitor ring. The good doctor used to be a respected man, but men of his profession are to be chaste. Dr. Mulciber has found a way using sex magic to help him navigate the ether realm and gather pieces of information. Upon finding out about these methods Mulciber was shunned and now he lives his life as a sad man.

The viewer is also offered a glimpse into the lives of the prostitutes. One of the girls has had her face slashed and while a young girl known only as Halfpipe makes jokes about the situation (the leather face bitches!) the rest of the girls hardly see it as amusing. Halfpipe is requested by Mulciber, the viewer is clued in that this happens quite a bit.

Just as Mulciber and Halfpipe are starting to enjoy themselves together, in a scene that starts blending computer animation with the already comic book brought to life animation style, Mulciber realizes that there is danger coming. Just as the words flash upon the screen that the danger is almost here the room suddenly explodes. Men begin to storm into the brothel looking for something; these men are lead by a man called Dragos. Mulciber shows off some pretty nifty tricks like killing a few with shots of lightening from his hands and then he tells Halfpipe that she should be on her way just before turning invisible. Dragos begins to question the brothel’s pimp and when he doesn’t hear what he wants he destroys the little man. This was when the screener ended and I was left with a “wtf” thought in my head.

After doing some research for the project I learned online that it is actually based on a series of graphic novels. The graphic novels are actually released in two series, the first series being a prequel of sorts to what happens in the film (which is the second series). To make more sense of the screener I witnessed I also learned that the film is being released in serial form, just like a comic book. The film will be released in its entirety in March of 2010, so until then we are left with just these short glimpses into the world of Godkiller.

I don’t really have a lot to go on about the film but I can state that it definitely has a different feel to it. The narration while viewing some of the images is far more disturbing than what could be shown in a live action film. The characters in Godkiller are also just as dirty and disgusting as the world around them. The movie really does come across different, new and very smart. The serial releasing is sure to anger some, but to some of us who still have a firm grasp on our inner geek this is great.

I’m sure as the episodes in the saga are released the story will begin to flesh out and to be honest I think this might be one of those strange films that is immediately going to be a cult classic.