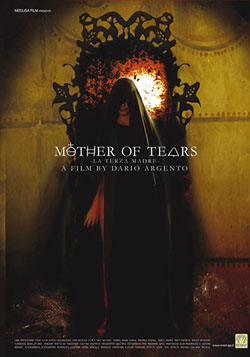 A young woman named Sarah opens an ancient urn that unlocks a horrible evil. While on the run for an alleged murder, she discovers that her involvement with this evil runs deep into her past. The third of three powerful witches known as the “Three Mothers” must be stopped, and Sarah is the only one that can to it. As she tries to decipher the secrets of her past, violence and murder follow her every move.

La Terza Madre, The Mother of Tears, is the latest film of the Italian horror master Dario Argento. Preceded by the classics Suspiria (1977) and Inferno (1980), Mother of Tears is the third and final installment of the “Three Mothers” trilogy. In the film Inferno an ancient text is found that tells of the three cities where the 3 mothers reside, Freiburg, New York, and Rome. Mother of Tears (MOT) is the story that takes place in Rome. It stars Dario’s daughter Asia Argento as Sarah Mandy, a young and beautiful art historian, who accidentally frees the demonic powers of Mater Lachrymarum, the world’s most mighty witch.

What Sarah does not know is that she was destined to battle the witch with her own supernatural abilities, and she is the only one who can stop the second age of witches. She meets up with some knowledgeable pals and they tell her that her mother Elisa Mandy fought against the Mother of Sighs in Germany. They also mention Suzy Bannion, and later, the book The Three Mothers. These few references to the first 2 films are really all that links them. The overall look and feeling of Mother of Tears is completely different than Argento’s earlier works. Drawings of the three houses from all 3 films are shown, which is pretty cool, but little else is reminiscent of the prequels.

Mother of Tears is actually pretty good compared to the almost unwatchable last couple of films Dario has put out. Unfortunately, that doesn’t say much for Mother of Tears, but not since Opera has Argento been able to take audiences on a haunting romp worthy of his name. Both Suspiria and Inferno are so superior to this film that it’s difficult to call it a sequel, but they are so great that it’s difficult to talk sh*t on Argento. He is responsible for some of the most beautiful and terrifying films of all time, so much respect to Dario. However, this flick lacks the artistic composition and color that Argento’s work is so famous for. It begins to feel like an episode of Charmed instead of the effort of a genre god. The ending is nothing short of laughable with green screen artistry straight out of a wedding video.

While Mother of Tears was an overall disappointment, it’s not without its decent points. Asia Argento, once again, delivers a great performance as both troubled and seductive. This picture has a lot to offer the gore hounds as well. There are some mighty brutal manners in which characters are dispatched, though like most of the film, they lack artistic integrity. The makeup and gore effects by Sergio Stivaletti are done really well, and the cheap CG effects aren’t even that bad. Filmed in Rome, it must be difficult to not have amazing scenery to shoot, so the locations are awesome. All these attributes make MOT watchable, but disheartening for fans hoping to see a triumphant Dario comeback.

Like Romero, Craven, Carpenter, and the like, even masters can fall off. Fans can expect and/or dread the Suspiria remake in 2010, I know I’d rather be attacked by a Seeing Eye dog. Maybe it’s time for Dario Argento to enjoy his place in the horror history hall of fame, and say Ciao.