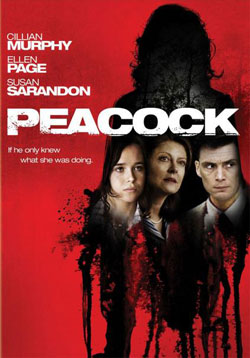 John Skillpa, a quiet bank clerk living in tiny Peacock, Nebraska, prefers to live an invisible life. This might have to do with John’s secret: he has another personality no one knows about, a woman who each morning does his chores and cooks him breakfast before he starts his day. Then, in a moment, everything changes…

John is just an average man who lives an average life – he’s a bank clerk from nine to five – hey hell, he pays the price. And all he wants is to be left alone in his average home, cuz this dude always feels like he’s in the Twilight Zone. See, he prefers to be left alone because there’s more than one of him swimming around in that big ole noggin of his – Miss Emma comes out every morning to fix John breakfast, clean the house, do the chores, and leave him notes about what to do while she’s asleep, before meekly John takes over again and goes to work.

But then one morning while Emma is snagging the laundry off the line outside, a train derails and both John AND Emma’s lives (life(s)?) are changed forever – the neighbors see her, John’s boss sees her, and everyone now assumes that Emma is John’s wife. What does that mean? It means more screen time for Emma as now more people expect to see John’s “Better Half” now that the weasel is out of the bag. But it also means that we get to witness a beautiful downward spiral of a spectacle of internal battling wills as Emma lays the smack down on John’s mind and body as the struggle for dominance of his psyche begins. Bring it on!!

The old “split-personality” flick finally rears its head around me once again…it’s been quite some time since I’ve gotten the pleasure of watching one and reviewing something such as this. Granted, I’ve sat through many a split-personality disorder movie in my day; the most famously well-known of these of course would probably be SYBIL, which if memory serves won many well-deserved awards for Sally Field. The most lesser-known, of course, would probably have to be the Michael Keaton-starring MULTIPLICITY. Or were those clones? My memory fails me on that one, as it was so gawdawfully painful to sit through that I’ve tried repeatedly for years to forget as much about it as humanly possible. PEACOCK, though, is a bird of a much different and brightly-colored *snicker* feather.

Now, before you go raking me over the coals for dealing out spoilers when you know how much I hate them, step off…everything, with the exception of my excerpt from the most excellent song by Rockwell, in the Quick Fix above can be peeped in the trailer on the movie’s official website. I strongly questioned why they would EVER drop the “big reveal” bomb in the trailer like that, but in watching the movie itself unfold and unravel before my eyes, it suddenly became very clear to me – the filmmakers weren’t nearly as concerned with whether or not we knew the “how” of it all – they wanted us to watch the film closely and pay attention so that we could learn the “why” of it all….nicely played!

From everything I’ve heard and read lately, everyone’s going on and on about how Cillian Murphy (28 DAYS LATER, BATMAN BEGINS) deserves an Oscar for this role, and how he gave the performance of a lifetime here, blah blah, yadda yadda. Well, I can assure you beyond the shadow of any doubts that after watching this flick, IT’S ALL TRUE!!! I knew the dude was talented, but his performance here was just phenomenal and beyond comprehension. Ellen Page has been on my watch list since HARD CANDY – such a beautiful woman, and talented on top of all that. I could have used a lot more of her, but she was dead-on here, so no complaints. Always reliable and on hand as well were Josh Lucas and Susan Sarandon…and we can’t forget a VERY creepy performance by Mr. Lone Star himself – Bill Pullman. I could stand to see him doing more roles like this.

Director Lander, from what I could find, other than PEACOCK, has one short film to his directing credit from ten years ago…if this is what the dude does every time, then he’s worth the wait. I appreciated the fact that not everything was spelled out for me (till the end, but that’s my only beef) and that I got the pleasure of getting to figure some sh*t out on my own…always good to dust the rust off this old noggin of mine from time to time!

Maybe it’s because I’m getting older, hence a tad softer nowadays, or maybe I’m getting more plot-centric (as well as eccentric, I’m told) than I used to be, but I’m here to tell you that a PG-13 rating doesn’t always mean a sh*tty horror movie as I used to think it did. They can, in fact, sometimes be really tense, suspenseful, engaging – insert your adjective here. PEACOCK (NOT a sequel to HANCOCK, just in case anyone was wondering) is a really cool, tightly-wound psychological thriller. It hits DVD very soon – April 20th, to be exact – so if you’re looking for a little break from sadistic traps, guilt-ridden serial killers with agendas, or gore just for the sake of gore, and want a well-written and extremely well-acted thriller, then PEACOCK is your flick!!