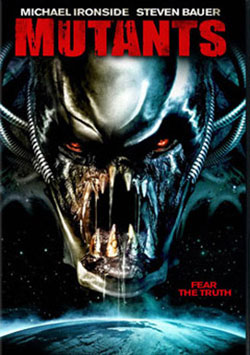 When a ruthless corporate-sponsored scientist develops an additive designed to make ordinary sugar wildly addictive, the chemical mutates his imprisoned test subjects into savage, bloodthirsty zombies. Now, the corporation’s crack security team must contain the threat before the mutants escape and the poisoned sugar gets into the mainstream food supply. Michael Ironside and Steven Bauer star in this horror thriller from director Amir Valinia.

I really hate giving a film a bad review. I would much rather talk about a movie that affected me in a positive way. “Mutants” just made me sad, left me feeling a bit bummed out. I hate seeing actors that I have admired for a long time “slumming it” in films. I understand that character actors need to work, they are working stiffs just like the rest of us. And in “Mutants”, the amazing Michael Ironside just doesn’t belong. He isn’t in the film for more than fifteen minutes or so, but to see him almost struggling, really left me with a bad feeling. I will do my best to be as objective as possible but I may never watch Michael Ironside in a new film ever again.

Not to be confused with the recent “Mutants” film from France, this one, the Just Rite Sugar Company hires a scientist that spikes the sugar and makes it drug-like addictive. They use people from the streets, like junkies, the homeless, to conduct experiments on with the deadly sugar that eventually turns its unsuspecting victims into, well, I guess, mutants? When the brother of the company’s secretary is mistakenly imprisoned with the rest of the infected, she, along with the help of her father must find him before he becomes infected too.

That is the plot, in a nutshell. Sounds interesting, right? Well, it’s not. The first several minutes of the film is Steven Bauer debriefing Michael Ironside and his troops via satellite. It caught my interest right away but then, the rest of the story unfolds in flashback. A plot device that just doesn’t work for this film. Once we see the brother Ryan (Derrick Denicola) taken and thrown in with the infected, it goes downhill from there. The dialogue scenes are long, very talky, and uninteresting. And we don’t see Michael Ironside in action until the end of the film. The villains are not very menacing and the mutants of the title…. Well, they really aren’t mutants at all. They’re just a bunch of rabid, zombie-like humans with a couple of sores and a bit bloody.

One thing I have to admit, there are a couple of interesting actors in the film. Acting wise, they are mediocre but they both have a presence. If given the right role in the right film, they could be fun to watch. Louis Herthum, who plays the father of Ryan and Erin (Sharon Landry), has some acting chops and looks like he can really hurt someone. The problem was that he wasn’t given the chance to be a hero in the film and he should have been. Commander Sykes (Tony Senzamici) works for Braylon (Richard Zeringue) the head of Pure Rite Sugar and the crazy mastermind who thinks he will make millions off his addictive sugar. Tony also has an interesting presence. His acting wasn’t as strong as Louis, but I found him to have some charisma and an attitude that I enjoyed. Michael Ironside is still a badass and always will be. 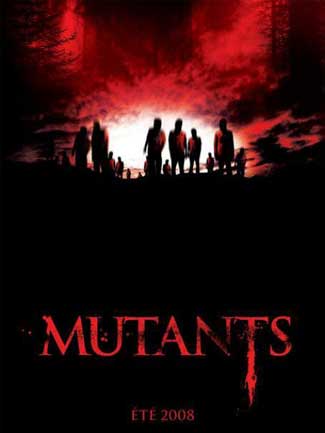 This film didn’t do anything to help cement it but he is. Maybe it’s just me, but when we do see him finally moving around in the films final fifteen minutes, it almost looked like he was having a hard time and that hurt a bit to see.

When I was doing some research on this film before writing the review, I saw the DVD cover art with a crazy looking mutant on it. Don’t be mislead, that mutant is no where to be found here. In fact, it’s hard to find much of anything worthwhile in “Mutants”. I think you will be better served if you sit this one out. Unless, of course you enjoy bad movies with horrible acting, silly story, underused talent, and crummy CGI. I tried to be as positive as I could about this one but sorry, it is what it is and it ain’t good!!!