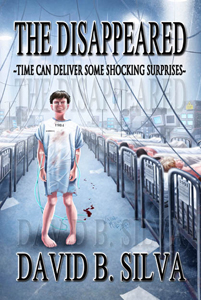 Ten years ago: Gabriel Knight, age 11, takes a bike ride to the park and becomes one of the … disappeared.

When Teri Knight answers a knock at the front door, she discovers her son Gabriel standing in the doorway. Only it can’t be her son. Gabe took a bike ride to the park ten years ago, at age 11, and became one of the disappeared. He would be 21 now and this boy … this boy is the same age as Gabe was when he went missing. Except for the color of his eyes, he looks exactly like her son. He’s wearing the same clothes her son wore the day he disappeared. He even refers to her as Mom.

If he is Gabe, how is that possible?

Why hasn’t he aged?

Where has he been for ten years?

And why is he so weak and in apparent ill health?

Teri is struggling with each of these questions and barely getting to know this boy who has arrived so unexpectedly, miraculously at her door, when a team of armed men arrive at the house in search of the boy.

For Gabe and Teri the clock is now ticking – and time is running out.

Who are these men?

What do they want?

A dark thriller with a highly unusual and inventive twist.

Dark Regions Press is never afraid to push the boundaries when it comes to publishing fiction.  Their latest imprint “Dark Thriller” shows that they won’t stand on their past laurels, but continue to bring us new and exciting fiction.

Their first offering from their Dark Thriller line is “The Disappeared” by David B. Silva.

Not being familiar with Mr. Silva’s work I was excited when I received the book from Dark Regions.

First let me say, that I have been reading nothing but horror for many years. Not that I don’t like other genres, it’s just that there are only so many hours in a day and so much great horror to read. Being a fan of Dark Regions and also for how kind they have been to me over the past couple of years I thought it was about time to get out of my comfort zone and try something new.

“The Disappeared” really surprised me. I jumped in at the first page and just couldn’t put it down. The action is fast and furious, the characters wonderfully developed, both the good and the bad.

The story is filled with twists and turns, with a wealth of characters and locations that will keep you turning the pages at a furious pace.

A loss of a child is devastating to any parent and Mr. Silva paints that devastation wonderfully, imparting his main character Teri with a sense of realism that makes it easy to know and care about what happens to her.

If “The Disappeared” is any indication of what to expect from Dark Region’s Dark Thriller imprint I will most definitely be leaving my comfort zone more often.