Roger Corman & Francis Ford Coppola Explore the Demented World of the Seedy, Greedy & Insane, all in HD for the 1st Time Ever! DVD/Blu-ray Combo Pack Out April 26th

Produced by celebrated B movie icon Roger Corman and directed by the legendary Francis Ford Coppola, 1963’s terror-ific Dementia 13 will be available in a special DVD/Blu-ray combo pack, April 26 from Film Chest on the HD Cinema Classics and CULTRA labels (distributed by Virgil Films & Entertainment).

Considered Coppola’s first mainstream, “legitimate” directorial effort, this gothic psychological thriller – based on a story idea Corman penned in one night – was shot for a budget of $42,000. The majority of the American actors were college pals of Coppola, many of whom paid their own way to Ireland for the opportunity to appear in a film. Although Coppola promised “lots of sex and violence,” Corman later battled with Coppola and hired director Jack Hill to shoot additional scenes of carnage. For years, it was rumored that the film’s print had mysteriously disappeared. Now, Film Chest makes Dementia 13 available to fans, restored and in HD for the first time ever!

After inadvertently causing her husband’s fatal heart attack, Louise, a scheming young woman (Luana Anders, Easy Rider, The Last Detail, TV’s Santa Barbara), attempts to have herself written into her wealthy mother-in-law’s will.

Forging a letter from her deceased spouse to convince his family he’s away on business, Louise – determined to get into their good graces – pays a surprise visit to the ancestral home in Ireland. With other family members gathered at the foreboding castle, she joins in a morbid ritual to honor Kathleen, her sister-in-law who died mysteriously seven years earlier.

When an axe-wielding lunatic begins murderously stalking the gatherers, her plans are permanently interrupted. But which one is the killer? Is Louise – or one of the other peculiar mourners, each with a dark motive – willing to do anything to gain fortune?

Dementia 13, restored from original 35mm elements, is presented in widescreen with an aspect ratio of 16 x 9 and 5.1 surround sound. Enclosed is a collectible postcard reproduction of the original movie poster. Special features include Spanish subtitles, before-and-after film restoration demo and trailer. 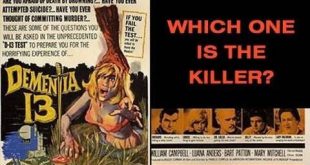