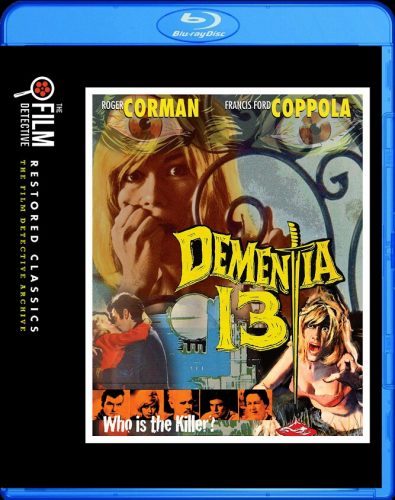 A woman fears her inheritance is about to go up in smoke following her husband’s untimely demise and concocts a story about him being away so that her in-laws make good on the money while an axe murderer stalks the grounds.

Based upon his cinematic output of the 1970’s, Francis Ford Coppola is rightly considered one of the finest directors of his generation.  From The Godfather to The Conversation to The Godfather Part II to Apocalypse Now, it seemed that during this glorious decade he could do no wrong.  Things haven’t been quite the same for him since then when he began the 1980’s with One from the Heart and followed with two S.E. Hinton adaptations, a look at a Harlem nightclub, growing up in the 1950’s, a revisiting of Vietnam, and a man named Tucker and the cars he built.  Mr. Coppola has made more than one foray into the horror genre, his earliest being Dementia 13 which he made for producer Roger Corman in 1963 for American International Pictures, and nearly 30 years later with Bram Stoker’s Dracula in 1992. 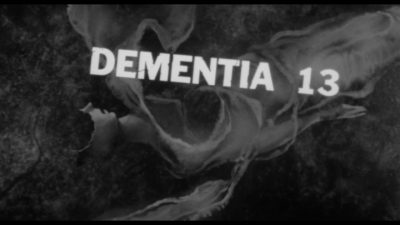 Dementia 13 was one of the first titles that I rented on VHS from the new Blockbuster Video which opened in an adjacent town in December 1988.  I saw it once, and remembered virtually nothing of it.  It’s by no means a memorable film and it really only is of interest in the annals of cinema due to its having been an early effort by Mr. Coppola.

Late one night, John Haloran (Peter Read) and his wife Louise (Luana Anders) fight about his wealthy mother’s will and how the whole estate is due to go to charity in the name of a woman named Kathleen.  Louise is entitled to nothing should John die before his mother does.

Guess what?  He drops dead, right there in the middle of the boat they are rowing in.  How convenient for his mother!  Instead of being upset, Louise pushes John overboard  (with a little off-screen help from the film crew, of course) and hatches a plan to get her hands on the money by convincing his relatives that he is just away on business.  His family lives in a castle in Ireland, and they are comprised of John’s two brothers, Billy (Bart Patton) and Richard (William Campbell) and his mother, Lady Haloran (Ethne Dunn). 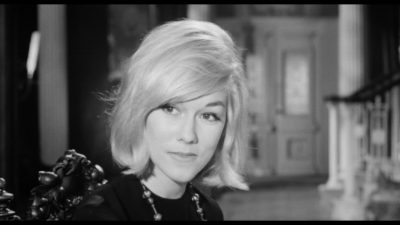 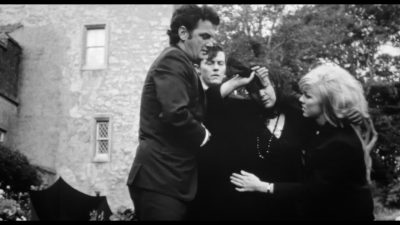 Louise learns that Kathleen was John’s sister who accidentally drowned as a child.  Kathleen’s mother and two sons engage in a yearly tribute to Kathleen which ends with the mother fainting.  A bit overly dramatic it would seem, Louise nevertheless schemes to convince Lady Haloran that Kathleen is attempting to contact her from the world beyond and goes so far as to take Kathleen’s old toys and place them at the bottom of the pond, hoping that they float up to the surface! 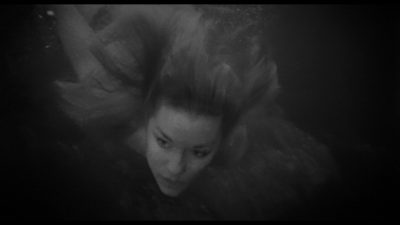 Unbelievably, at the bottom of the pond is what looks to be Kathleen’s perfectly preserved corpse, which scares the life out of Louise – think Matt Hooper searching Ben Gardner’s boat in Jaws (1975).  Once she surfaces, she is axed by a maniac who appears to be waiting for her.

Dr. Justin Caleb (Patrick Magee, the wheelchair-bound writer in 1971’s A Clockwork Orange) arrives in the nick of time and orders the pond to be drained, which reveals a headstone memorial with Kathleen’s name on it; later, Lady Haloran is nearly killed by the axe-wielder. 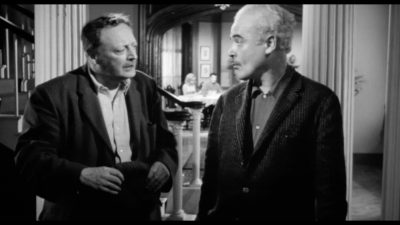 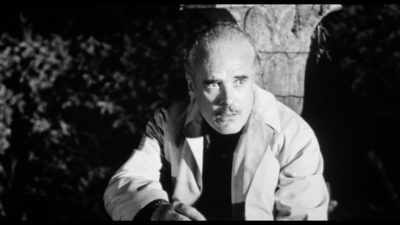 The ending reveals the killer, and it’s not that much of a surprise.

Dementia 13 is certainly a product of its time, clearly a Psycho rip-off which, if you watch it very closely, you can see how it even inspired 1980’s Prom Night.  It was made on a shoestring by the fast-paced school of filmmaking that brought us Martin Scorsese, Jonathan Demme, Ron Howard, James Cameron, Peter Fonda and Jack Nicholson to name just a smidgen.  The sort of fare that was double-billed at drive-in theaters amidst necking teenagers and drunken war buddies it is no cinematic masterpiece but rather a piece 1960’s fluff, a good way for its director to learn filmmaking and prepare him for The Big Time.  Interestingly, only four years later would he write his best film, The Conversation, (made in 1972 and released in 1974 as a compromise from Paramount Pictures who begged him to directed The Godfather Part II) following the accolades bestowed upon Michelangelo Antonioni’s Blow-Up, a film that clearly inspired him.

The best part of the movie is the poster, although the music is effectively creepy.  Luana Anders was 26 when she appeared in the film and she is likeable enough (I always liked her in Hal Ashby’s The Last Detail from 1973), but she sadly passed away in 1996 at 58 from cancer.

Dementia 13 was made at a time when directors cut their teeth on schlock material but were given permission to make a film that they could be proud of provided they got it done on time and within budget.  They would go on to make bigger and better films and it’s a method of filmmaking that is long gone.  If I sound like I am writing off the film, I’m not; it’s worth seeing, but mostly for the anticipation of what its director would do in the future rather than as a way of passing one’s evening.