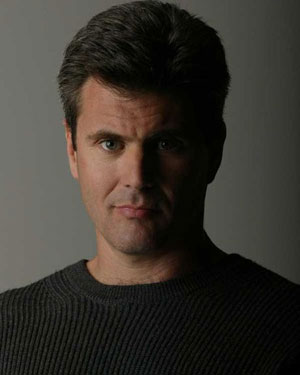 Alec Gillis knows his Monsters. The creator of Pumpkinhead, the Graboids from Tremors, and the Aliens and Predators for the last 20 years, Gillis has been busy. He came up in the school of Special Effects hard knocks, and now he’s calling the shots as co owner of Amalgamated Dynamics Inc. Having worked for ADI, I know the pains of being under the shadow of his iron fist. Let’s talk some sh*t with a dude that’s at the top of the food chain. Making creatures and punching faces, this is Alec “The Axe Murderer” Gillis.

Alec, let’s start with an easy one, how much do you bench?

HA! If only you’d asked that 10 years ago! Then the answer was 400 lbs. Now, I’d have a hard time lifting the pegs in your earlobes.

You’ve designed some pretty kick ass monsters, what were your favorites to create?

Hmmm. Well sometimes the fun of the experience colors my ability to self-evaluate. Overall I’d say Pumpkinhead and the Tremors worms are up at the top of the list because there is more of me in them than some of the other stuff we’ve done.

What old creature feature films inspired you to get into FX?

A bunch, really. Any Harryhausen. The Universal stuff like Frankenstein, and The Creature. The original PLANET OF THE APES was huge to me. NIGHT OF THE LIVING DEAD. Also some lesser know ones like HUSH HUSH, SWEET CHARLOTTE and BLACK SABBATH. (Black and white films used to scare the hell out of me.) Sci-fi like SILENT RUNNING, SLAUGHTERHOUSE FIVE, THE MAN WHO FELL TO EARTH, OUTER LIMITS. I also love old adventure movies like ZULU. You gotta round it out with some other genres, I think.

As one of the head honchos at ADI, what are some of the difficult tasks you have when dealing with the big studios and keeping the fresh artistic input of you and your designers?

More and more there’s a committee aspect to design. It used to be that if they hired you to build, you were the expert. Now the execs enjoy getting their hands in it, and also production designers who may not really have a passion for the creature stuff end up in a control position because the have rendering skills. It’s all a function of the fact that FX movies make and cost more than any other kind of movie, so people’s jobs are on the line. The tough thing is explaining to an artist (or a fan, for that matter) why we are building something that might not be as cool as it could be. I tell all my artists that this is commercial art, not fine art. Always have your own art to go home to. Nobody can tell you what to do when you’re sculpting at your kitchen table.

ADI wouldn’t get anything done without its crew. Who are some of the “behind the scenes” peeps that make it all happen?

We’re very lucky to have had opportunities that allow us to hold a crew together, and eliminate the bad eggs. Yuri Everson, our shop supervisor, has been with us 17 years. Garth Winkless, has been here 12 or so years. Steve Frakes, mold shop super – 15 years. Dave Penikas – mech design for 15 years. Tim Leech, in our seaming dept., Mike Larrabee – paint, Steve Koch – photoshop and sculpture. Tamara Carlson-Woodard and Dawn Dininger in fabrication. Lots of great artists like Steve Wang, Joey Orosco, Aki Ikeda, Hiroshi Kategiri, Andy Schoenberg. Too many to name!

What advice can you give to newbs staring out in the FX industry?

Learn digital. I think there’s a coming backlash against digital effects, but the tools are so damn cool, no artist should be without them. BUT…start with a foundation of old-school traditional art. Nothing beats feeling clay in your hands or spilling paint on your parachute pants (sorry. 80’s flashback.) Davis Fandino, one of our top sculptors went to Italy recently to work in a marble sculpting studio! THAT’S old school!

Do you think Mikey Rots will ever be able to hang with the big boys and sculpt at ADI?

Well, he’s got an awesome Pumpkinhead tat on his calf, so that’s a good start!

Who is your favorite Mixed Martial Arts fighter?

Couture, of course. Us old white guys gotta stick together. On the women’s side, Gina Carano. She trained my black belt daughter for an hour and was the most inspiring, normal and gracious person you’d hope to meet!

Submission move you’d most like to use in a real fight?

Why would I limit myself to only one technique? Should a painter only use one color? First, I’d soften my opponent up with leg and liver kicks, then I’d start droppin’ bombs. Once I’d served up a helping of leather-loaf, I’d change levels and shoot in for a double leg. I prefer side control, where I’d hang for a while for some ground and pound. As soon as I heard gurgling of blood-obstructed breathing, I’d transition to a kimura or maybe a key-lock. Just for fun I’d test out an anaconda or a darce choke. It’d be a total jits clinic. Once my opponent tapped or went nite-nite, I’d carve a cross in his forehead like Pumpkinhead. Then I’d jump up on the cage fence and snarl with my Predator mandible mouth guard

You worked on Friday the 13th IV: The Final Chapter when you were a wee lad. Tell us your Tom Savini story, we all have them.

Tom was a great guy. Lots of fun with pranks and gags. I was too much of an fx snob to have as much fun as I should have though. I remember when we were shooting in Topanga Canyon, some teenagers stood up on the road out of sight and shouted “Savini, you suck!” the whole crew heard them. Tom just looked over at me, shrugged as if to say “Whaddya gonna do?” Back then if you wanted to bitch at an effects guy, you had to leave your home. Those were the days.

All the big time FX shop owners have at least one show they’re embarrassed that they were a part of, c’mon Gillis give it up, which one makes you cringe?

Oh they are out there, believe me. I had something to do with a rat puppet from a Freddy Kruger movie. GALAXY OF TERROR was no classic. LEVIATHAN could go away and I wouldn’t be sad. And thankfully no one has seen the pilot for DILBERT.

We all know you as Shop Owner, FX Guru, and Makeup Artist, but you are also a Writer/Director. Can you tell us about some of your own upcoming projects?

Only time will tell, my friend. We aren’t big talkers, BUT my book WORLDS: A MISSION OF DISCOVERY has been optioned by a major studio. The other projects are in the sapling stages.

Is it true that some crazy dude plays the bagpipes from time to time at your shop?

You have not lived until you’ve heard Garth Winkless play the Partridge family theme on the pipes.

Being a practical FX guy, how do you feel about CGI and its role in film?

It’s a great tool. There’s a tendency to overuse it and over nuance it, but there are lots of new directors who are going back to old school to get a fresh look.

I’ll be hokey for a moment and say my 4 daughters. They are a constant source of surprise, pride and ulcers.

I can’t possibly say just one…ALIEN, THE RING, THE EXORCIST. Ya know, like that.

It really boils down to moments for me. When the ghost comes out of the TV in THE RING; dancing dead in CARNIVAL OF SOULS. There’s a Fellini (?) movie where some creepy kid on a pier is bouncing a red ball. DON”T LOOK NOW has a really creepy little midget/kid, too.

Gotta go with Werewolves. Vampires have become longhaired sissies. Soon they will merge with goddam Pirates.

If it ain’t got chocolate, why bother?

Who would win in a no-holds-barred fight to the death between UFC’s Chuck Liddell and Trick or Treat’s evil rocker Sammi Kurr?

I wouldn’t want Sammi’s scabby burns in my face I can tell you that.

I’m sure it will be ignominious. Probably a bathroom accident. Look for my foamy mouth on rottentomatoes.com,

How can there be just one? Here goes: Frankenalienymircreaturezaiusqueenalienmonolithpredreganstein. There.

HA HA . . .yes!! That was the word from the man, the myth, the monster maker, Alec Gillis. Here’s a horrornews.net exclusive monster pic of the creature in Alec’s new upcoming secret project:

Keep an eye out for that and other projects from Alec Gillis and ADI.

Check out Alec’s book WORLDS: A MISSION OF DISCOVERY here at:
www.designstudiopress.com

Check out what ADI is up to at:
www.studioadi.com

and check out the ADI collectibles from AVP and AVP-R at Sideshow Collectibles:
www.sideshowtoy.com