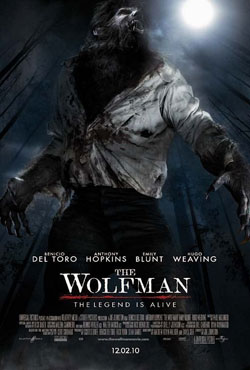 Set in the late 1880s, the film keeps the plotline of the original, with Lawrence Talbot (Benicio del Toro) meeting his father (Anthony Hopkins) following the death (and in the remake, disappearance) of his brother. The film details events during Lawrence’s past that led to his estrangement from his father (which includes Gwen), and the setting is changed from the mythical Welsh village of Llanwelly to the English village of Blackmore and the city of London. The official synopsis states Talbot was traumatized by his mother’s death as a child, while Gwen Conliffe (Emily Blunt) is his brother’s fiancée. Following his brother’s disappearance, Talbot hunts a murderer, which turns out to be a werewolf, and the curse is passed on

For Universal monster fans, the good news is that the new WOLFMAN is a good movie.
The bad news is that it could have been so much more than that. 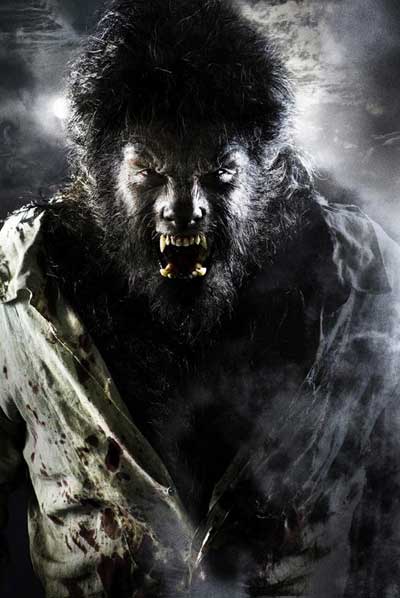 Certainly, in light of recent Universal history, this movie is NOT the travesty of VAN HELSING or Stephen Sommers’ MUMMY films. But it’s a far cry from the 1941 original and is not nearly up to the excellence of the early 80s werewolf films, such as Universal’s AMERICAN WEREWOLF, expertly executed by John Landis, or Joe Dante’s fresh THE HOWLING. In fact, what most reminds one of this movie is the Hammer version from 1961, CURSE OF THE WEREWOLF, starring an unforgettable young Oliver Reed.

But this WOLFMAN, though familiar on many levels, injects several new elements which are ultimately hit-and-miss onscreen. One of those which was feared most, the rendering of the transformation scenes from man-to-wolf and back with computer graphics technology, ends up being much less offensive than would have been predicted. 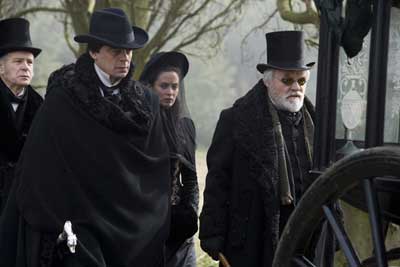 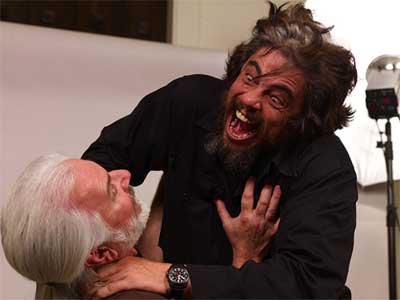 Alas, Joe Johnston, who has never before directed a horror movie, and was brought on at the last minute, did what he could with a film basically dumped in his lap, and he hits many of the proper horror movie notes. This is a dark gothic horror film and is, in many aspects, no holds barred in terms of graphic violence. It’s R-rating basically removes the teen/TWILIGHT audience from theaters. Johnston is supported by Tim Burton stalwarts Rich Heinrichs’ spot-on production design and Danny Elfman’s reliably genre-inflected music. A script by Andrew Kevin Walker (SE7EN and Burton’s SLEEPY HOLLOW) and David Self (the pallid remake of THE HAUNTING) had some promise. We do get some nice homages to the original film right from the beginning of the new movie. But in this case, the finally presented whole is no more than the sum of the parts.

Rick Baker created a potent design for the lead character, and Benicio Del Toro shines in the lycanthrope makeup. But he is very hard to like in his human form and ultimately seems miscast. Odd as he was a producer on the film that he turns in what is in the end a lackluster performance. Anthony Hopkins is such an obvious choice as Del Toro’s father Sir John Talbot, that he offers few surprises. Emily Blunt does what little she can with her role, which is more than Hugo Weaving has to do as a police inspector. 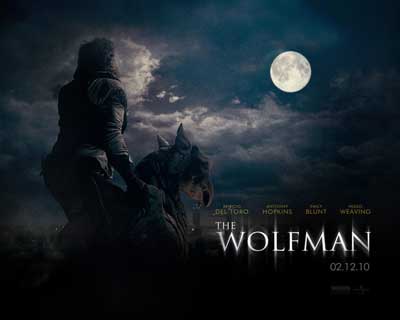 Perhaps it’s Johnston’s lack of horror cred or his abrupt entry to the project which failed to create a movie that lived up to its possibilities. We will never know what original director Mark Romanek had planned for the movie. But what most springs to mind is what this film’s many collaborators would have done with a natural choice for director: Tim Burton, after all, has long stated that he’d love to make a gothic horror film. And why not? 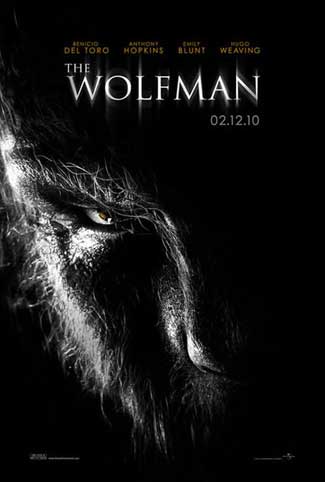 What remains will be generally enjoyable for most fans of the genre and classic monster films, but will likely fall short of expectations, unless the many postponements and design decisions have already hamstrung this movie going in with its intended core audience. In hindsight, the original Wolf Man stands tall as one of the three best monsters in movie history after Dracula and Frankenstein’ s Monster, and this movie SHOULD have reminded audiences why. We can hope that in seeing this new film, more people will revisit the original, but most are likely to leave theaters mildly entertained as opposed to blown away enough to dig up the history of this film and its titular character. 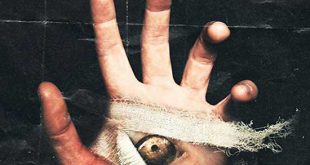