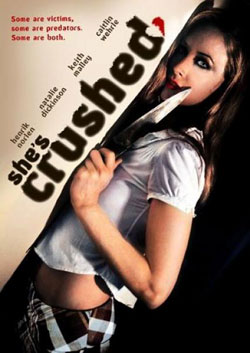 The morning after is acutely uncomfortable for Ray (Henrik Norlén), who engages in a one-night stand with innocent-looking Tara (Natalie Dickinson) and then tries to move on. Tara doesn’t see things his way, and she takes lethal measures to keep the passion alive. In this horror-thriller directed by Patrick Johnson, tortured soul becomes torturing avenger as Tara sets about obliterating from Ray’s life anyone who might compete for his attention.

Girl-next-door Tara has a terrible secret. Actually, it’s really no secret at all (just sounded like a great opener to me) – in reality, she’s merely batsh*t crazy, which is what Ray finds out after a drunken one night stand that he’d rather just forget about and move on from, especially since he was most likely too drunk to remember if Tara was any good or not. Oh, and the fact that he’s already got a girlfriend that he thinks he’s in love with…there’s that too. But Tara, you see, is not very willing to forget, and even less willing to forgive, as she sets about making it her life’s mission to destroy anyone that Ray holds dear in his life, or that holds Ray dear in their lives, in order to prove her undying and unmatched love and devotion to him. Man, some chicks just can’t take a hint….

Ok, gentlemen (and ladies – there’s been plenty of “psycho stalker dudes” type of movies out there in the last couple of decades too, so listen up!) – let this serve as a cautionary tale to you…in this day and age of indie horror it seems that one night stands are punishable by death and there’s no longer such a thing as the f*ck-n-run. I really don’t have a problem with that, as there’s many very entertaining “psycho lady” movies out there – as we’ve learned from everything from PLAY MISTY FOR ME to MISERY, infatuation can be a homicidal bitch.

Although, and to those of you who know me, this won’t come as any shock since my tastes can run towards the odd; and for those of you who don’t know me…well…try to hold on – I am a firm believer, still to this day, that FATAL ATTRACTION is one of the worst, most overblown and over the top f*cking silly/bad stalker movies ever made, but yet I still to this day really dig on Alicia Silverstone in THE CRUSH, of course the extremely hot at the time Jessica Walter in MISTY, and my personal favorite, MALICIOUS, with Molly Ringwald. I know, I know…reading that last part back just now makes it seem f*cked up even to me, and it’s my life. Probably has to do with her finally taking her clothes off in a movie, but I digress… 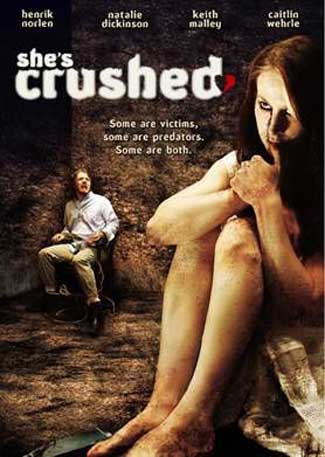 So given the fact that I love some of the more jeered in the subgenre and absolutely hate the one that’s considered the benchmark for crazy chick flicks, you’d think I’d be all up into this one, right? Well….no. SHE’S CRUSHED is actually the indie horror version of FATAL ATTRACTION to me. I can’t blame the actors at all….after all, every scene that Natalie Dickinson (Tara) is in had me glued to the TV with her beauty and presence. Henrik Norlen (Ray) is a good actor, although he seemed a little out of place and miscast here.

But I have to say it was Malley as Ray’s horny/obnoxious workmate and sidekick that truly kept me from just fast forwarding to the end…he really was the film’s saving grace for me. Imagine a Yuppie version of Jason Mewes’ character Jay from all of Kevin Smith’s View Askew-niverse flicks – always talking about either whacking off, f*cking, or both – and there you have it. Malley was hilarious, and I hope he does more movies soon.

So what, pray tell, went wrong? Well, if you wind up watching it and feeling the same way about it that I do, then I guess you’ll have to ask writer/director Johnson someday. Sure, there’s no shortage of blood what with stabbings, slicings, a gratuitous foot torture scene, and some homemade lobotomies with a drill, and that’s all well and good. But what there’s also no shortage of is unanswered questions; like for instance, why is Tara so batsh*t crazy? Is it because her daddy (or stepdaddy, don’t know for sure) is nailing her on the side? Is it because her mommy is all Jack Nicholson post-lobotomy in a psych ward? How does Tara find out so much about Ray in such a short time as to know where to hit him exactly where it hurts and keep him from going to the cops every…single…time he gets a tiny little bit of balls and confronts her?

Which leads me to the big one, Elizabeth – how in the almighty f*ck are we supposed to be cheering for a character who is such a complete and utter whining, crying PUSSY???!!! Why Ray, a former soldier of all things – trained in combat and self defense, among many other things – didn’t roundhouse kick the bitch in the head Chuck Norris-style and haul her crazy ass into the cops at the end is waaaaaaaay beyond me. Honestly, I’m all for suspension of disbelief in my horror movies, just so long as two simple rules are followed; one of them being, give me SOMEONE to root for. OH, wait…I take that back. I did have someone to root for – Malley’s character – but he wasn’t even given the chance to score with Tara before the inevitable happened…poor bastard.

To me, it just seems like this particular film would have worked much, much better as a 20 minute short as opposed to an 85 minute feature. I say that because there’s only so many times two characters can have the same confrontation under different circumstances and yet have the very…same…exact…confrontational dialogue dragging on over and over and over and over and over before it becomes classified as nothing more than lazy writing. I swear, if I had heard, “Why don’t you love me, Ray??” and, “Why won’t you f*ck me, Ray??” one more time, I was all prepared to go all Elvis on the TV and put a bullet through it.

Constantly repetitious dialogue and the total Billy Bitchcakes wuss our “hero” turned out to be just ruined the experience for me and made it seem to drag on forever. But in the end, I suppose SHE’S CRUSHED is worth watching once for the acting, the blood, and the humor of Malley. I’m told by my inside source, Huggy Bear (who’s never led me astray before), that this flick hits On Demand on Feb. 1st and streets on DVD a couple of weeks later on Feb. 16, so if you’re curious, give it a shot. My one shot is done, and I’m moving on to multiple shots of Jaeger in an attempt to forget the experience. So until next time, remember folks – if your significant other isn’t putting out and you get any urges that can’t be suppressed with hard liquor, use your hand! 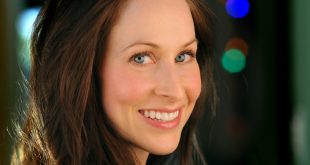