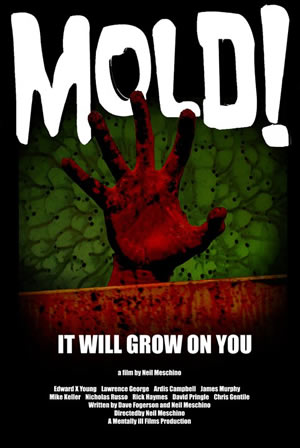 Set in 1984 in an experimental lab deep in the southwest desert of the United States, a group of scientists play host to a visiting Congressman and a Colonel. They are to display the latest developments on a government sponsored experiment. The scientists have created a biological weapon that can destroy plant life in an astonishing rate, a mold like substance called Stachybotrys Morte. When a madman sabotages the experiment, the group quickly discover the unfortunate side-effects of human contact with the mold. Quarantined inside the bunker, the survivors must avoid contact with the spreading mold, survive infection and infestation and find a way out.

Winner of the Emerging Film Award at the recent 13th Annual Nevermore Film Festival in Durham, North Carolina, Mold! is a wacky, comedy-sci-fi throwback to the early days of Troma and direct to VHS splatterfests of the Eighties. The script never takes itself too seriously and the characters are rife with satire, many sporting their manly mustaches. It’s hilarious and a good time but not necessarily a good film. It succeeds despite its obvious shortcomings due to an energetic cast, witty dialog and a fast pace. And a lot of splatter. 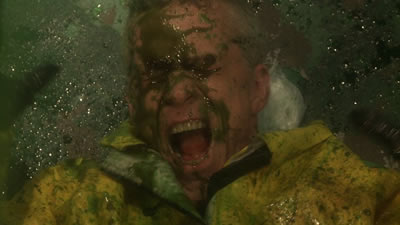 Creating Mold! as an extension of his film school thesis, independent film maker Neil Meschino has crafted a wickedly sci-fi spoof on a micro budget that should make Roger Corman and Lloyd Kaufman proud. Everyone seems to be having a great time making the film and it injects and envelopes the film with a infectious energy. The bloopers presented during the end credits are a great edition to the film as well and display the energy found in the film itself. Meschino has crafted a small gem that succeeds due to its small budget and eager cast and crew. It’s a unique beast and a blast to watch – silly, outrageous, zany and gory. 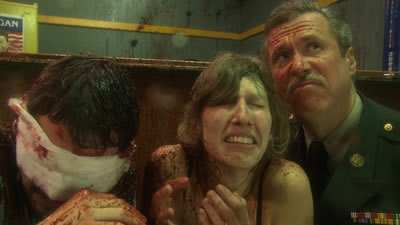 It’s quite possible that a script like this with the characters it has could only succeed with the small budget, low-tech lighting and camera work and ridiculously overstated acting. If the film were taken too seriously, the events that unfold would become too forced and too contrived. By the time a lead character takes a well timed prat fall, knocking himself unconscious for the remainder of the first act, the script has established it’s bizarre, absurd world with a sweaty scientist, a cigar smoking Colonel and a coke snorting Congressman. These characters would be equally at home in The Toxic Avenger or Class of Nuke ‘Em High. The dialog is rich too, sometimes producing awkward groans but mostly it’s full of hilarious wit and charm. 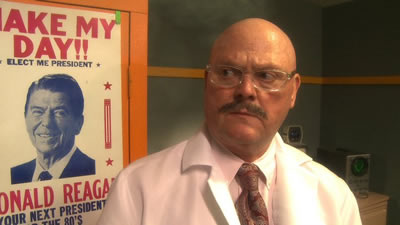 The director and script writer owe a large amount a gratitude to a fun cast. Rick Haymes plays Dr. Matthew Kane and comes across much like Michael Ripper from early Hammer films. Chris Gentile sporting an obviously fake p*rn’stash is hilarious as the jealous backstabbing Dr. Dave Hardy. Lawrence George and Ardis Campbell play two love-crossed scientists trying to work it all out during all the craziness. Edward X. Young brings down the house as a clueless but brazen Colonel who always has a lit cigar. Jim Murphy supports the cast as Congressman Stu Blankenship with an over-the-top satirical portrayal of early 80’s excess and greed. Mike Keller rounds out the cast as Sargeant Brisco who turns into a walking mold-monster but still has enough intelligence left to follow his Colonel’s orders. Its a fantastic ensemble that Meschino was fortunate to cast. 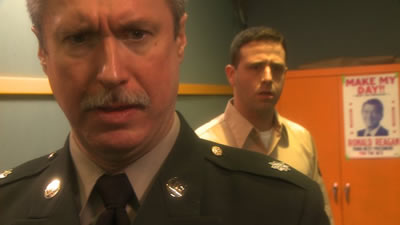 For the most part, Mold! is all comedy and satire, but it also has a large amount of gore and splatter. The special effects are delightfully old school, reminiscent of Evil Dead. Nothing looks particularly convincing but the effects are gruesome and splatteriffic: puss oozes, vomit sprays, eyes pop and heads explode. If the film ever tried to be serious, the effects would fail miserably; but here combined with the sardonic, campy tone they work perfectly. 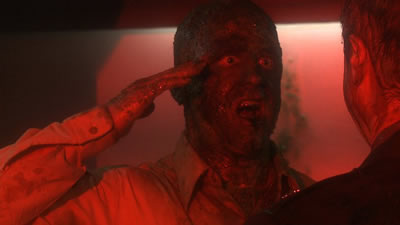 Mold! is a beast of its own making – a one of kind, a rare throwback to low budget 80s films. It has a smart, witty script and promising direction from a first-time film maker. A bright, funny cast combined with splatter-filled gore effect, make Mold! an amusing, fun time, well deserving of Nevermore’s 2011 Emerging Film Award for Feature Film. The film is fast paced, well edited and appropriately short. Mold! may not be for everyone; but, for anyone who grew up in the Eighties gobbling up low budget gore films or is fan of Troma films or Evil Dead, there is a lot to enjoy.