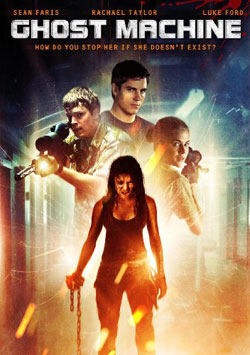 Two technicians battle a vengeful spirit that has infected their stolen military software.

Modern concepts combined with horror sometimes work and sometimes don’t depending on if the trend is pushed on the audience or just accepted as something new. Ghost Machine takes a modern idea and blends it nicely around a horror film scenario.

A special forces team in training has been using simulation programs in which the subjects are brought into a world that’s hard to distinguish from reality. This cutting edge approach is maintained and programmed by MIT wizard Tom (Sean Faris) that directly portals into the brains temporal lobe per a worn headset and a simulation sequence. The purpose is to train soldiers as if they were facing real events. The subjects sit down thru the whole procedure though once brought in they assume avatars that feel as if they are directly participating rather than just a video game.

Per use of signal mounts, they are able to map out an entire building, reproduce it per every molecule detail and create a live environment for the players. Once inside they are given weapons, clothes and any other portions of the game needed to play. After a training session, a few of the ambitious ones decide to borrow the gear and re map a new location. Everything is going fine until they discover that the building hosts an anomaly spirit that just so happens to engage the players once they are in.

This spirit is an angry soul called “Prisoner K” who was tortured 9 years back when the facility served a different purpose for interrogation. Her weapon on choice …..a chain that she is able to manipulate much like you’d except a “cenobite” from “Hellraiser” or better yet “Spawn”. Things go wrong when Benny goes in in anticipation of a cyber girl program they inserted. With this ghost in the loose his pleasure ride quickly turns into a capture and torture session.

Now of course as you may have guessed, it’s up to his friends to go in and pull him out, as disconnecting the head gear could kill him if not done properly. Special forces friends Jess, Vic and Iann go into the session with hopes of finding him.

Meanwhile we learn all kinds of back story goodness, as there team leader Taggert (Richard Dormer) who’s old school nature of hardcore training begins to harass Jess due to his lack of acceptance of women in the core. The Patient K played by Halla Vilhjálmsdóttir is revealed as a former cyber terrorist who’s spirit wont stay dormant. We get a preview of the past and her ordeal thru vivid flashbacks along the way.

An inside relationship builds up and all sort of techie talk goes into the device that is being utilized. Ghost Machine is directed by newcomer Chris Hartwill. The film takes a futuristic approach to old school ghost horror creating a pretty unique experience. FX work is done well much like you might find in the movie “Gamer” and is able to blend the two pretty nicely. Scares are minimal but still effective on the most part due to some creepiness of Halla Vilhjálmsdóttir’s performance. The game idea is spared the usually cliches and done in a realistic way that doesn’t get trapped in overly confusing notions of cyber world vs real. The key here is that the idea reproduced the reality better enabling the footage to play the part of 2 worlds.

The acting team works together nicely putting more focus on the horror aspect than too many relational aspects as we might have expected. Actress Rachael Taylor who plays Jess steals the show with a tough and aggressive role that works for her character nicely. I’ve seen alot lately and “Ghost Machine” was a fresh perspective and pleasure to viewing. Those who like to mix up the tech and horror will feel at home with the end result making this a great product to view. Uniquely effective! 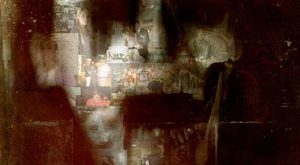