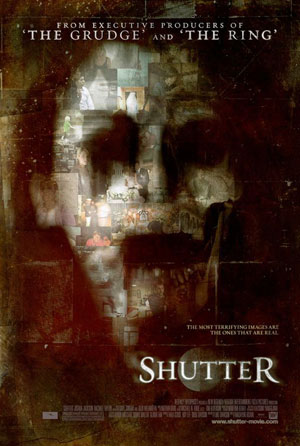 This American remake of a Thai horror blockbuster follows the Shaws, a young newlywed couple who become haunted by strange shadowlike images in the photographs they develop after their involvement in a car accident. As more terrifying supernatural occurrences befall them, they begin to wonder whether the photographic ghosts are connected to the accident — and to question whether they can survive learning the truth.

Not since Thirteen Ghosts (2001) have I seen a movie that is SO loud. Here, they made the “jumpy” scenes so loud so it would scare people (mind you this is coming from someone who LOVES going to concerts, especially the best band ever Iron Maiden). That aside, Shutter is like an alarm clock in an empty room. It goes off for a bit, but then after a while, it does its job and shuts up because nobody cares, and nobody, yes, nobody even has a CLUE that it turned off… let alone even turned on in the first place.

Shutter is a remake of a Thai film of the same name, except this time directed by a Japanese filmmaker (kinda like the Grudge, except Takashi Shimizu had directed the previous one too). You may recognize the director’s name, Masayuki Ochiai, if you have a knack for Japanese horror films, because he had already directed Infection (back in 2004, part of the J-Horror theater series), which, from what I’ve been hearing, is a good movie even for it’s genre. Shutter isn’t. And while I must admit I did find the concept remotely interesting (spirit photography), like most horror movies nowadays, is poorly executed.

(Warning, this may contain spoilers) So the story goes: Benjamin Shaw (the aforementioned Joshua Jackson) and Jane Shaw (Rachael Taylor) have just gotten married, and as a part of a career Benjamin dreams of, move to a loft in Japan. Before getting the loft, they give themselves a little holiday, and get away to a cabin near Mount Fuji. On the way to the Cabin, they imagine themselves hitting a girl standing in the middle of the road. They crash, and are knocked unconscious for 4 (or so I think) hours. The next day, it’s snowy (Continuity error number 1), and they wake up, while Jane looks for the girl they hit. Apparently, there was no girl. Hmmm, that’s strange!

Anyways, to the Loft. A week later after staying in the beautiful (apparently it’s “SO beautiful I’m surprised I haven’t take pictures of it yet” in the words of Benjamin) cabin, they move to a loft, and they are able to pursue a photography career. However, the pictures they took from the cabin arrive, and there’s something fishy here- there’s a weird light-like effect in the pictures. I dunno how that got there, Nor do they. They’re sure it’s just something with the camera, in which I’m sure it wouldn’t be. However, this isn’t just with THESE pictures- On the 2nd photoshoot (which involves girls dressed up old-fashioned amongst a modern background, which is actually a pretty cool concept if you ask me), in the camera’s previewer, a girl magically appears. That’s also strange, because she’s not amongst the other girls!

But this isn’t just with those photos- it’s happening in EVERY photo they take. This woman is appearing in the photos is the girl Jane thinks they hit (Continuity error number 2- Her clothes keep changing in each flashback to that night). We don’t really know who she is until midway through the movie (I won’t give away the whole thing). There’s this one friend of theirs living down there, the really cute Seiko (Maya Hazen). She takes Jane to the leader of a Spirit photography Magazine, and Jane is given an issue of the magazine. I’m not gonna say the rest, because right now, typing the whole thing up is really wasting my time when I could be out doing things like riding a bike, visiting friends, etc…. But then again, that’s the case with the whole movie.

The main problem with Shutter is that everything in the movie seems forced. I haven’t seen the original one yet, but I can assume that one is much better. I mean, a whole lot of the movie doesn’t make sense. I also noticed a lot of religious undertones in the movie, it’s like they’re smacking you across the face with a bible. Or some book on Buddhism or something since it’s in Japan, I’m not sure. The story is interesting but told in the most unprofessional way possible. There’s plot holes GALORE, stuff which doesn’t have any relevance to the story whatsoever, and even a twist at the end which feels silly, stupid, and tacked on at the last minute.

Joshua Jackson has the facial expressions and acting talents of a wooden chair. Throughout most of the movie he mumbles incoherently, especially in the scene where they visit a spirit expert and he translates for the character Sarah- you can hardly make out what he says (how Rachael Taylor made out what he said, I have no idea). Rachael Taylor seems to have gotten her acting talents from Joshua Jackson, but now that I come to think of it, that’s actually quite understandable- I really don’t expect the elementary-level script to have excited them to the point where they actually started caring about their characters.

Sure, the film isn’t COMPLETELY terrible- it has some moments that are creepy and build tension, but just “some” moments ain’t enough. If this film had any potential, it certainly would have been frustrating. And if it had a good cast too, it also would have been frustrating too- but at least it would have been easier to watch. A lot of people say “If you ain’t got nothing nice to say, don’t say nothing at all”. Well, there isn’t a whole lot of nice things to say about this so I think I’ll shut up now. Instead, I’ll just end this review with a quote from Norman Jewison from the Toronto International Film Festival 2004: “You wouldn’t believe all the bullsh*t those studios want you to make nowadays”. 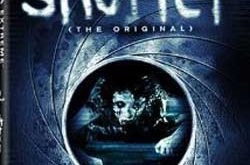