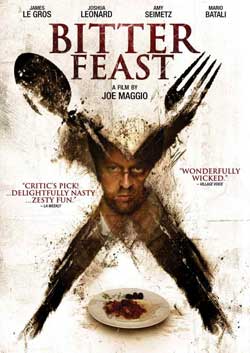 A celebrity chef exacts revenge on a food blogger who torpedoes his career.

QUICK FIX:
Iron Chef Peter Gray just can’t seem to catch a break…he loses his TV show, his kickass restaurant job, his woman, his self-respect, and finally, his mind. So does he look inward and try to become a better person? Duh, no – this is a horror movie. He of course points the blame elsewhere and once his Wheel of Fate lands on the internet blogger/food critic, JT Franks, that kept bashing his work, we’re off and running! From there he kidnaps the douchebag, takes him to a secluded cabin out in the middle of nowhere, and forces him to cook his very own perfect dinner. They say that revenge is a dish best served cold; but honestly, I prefer mine scorched on both sides over a high flame, then cooked slowly over a low heat for just a few minutes, and then BAM!! But that’s just me…

RAMBLINGS:
It’s no secret to those that know me…I love food. I love to cook, although most times I’ll leave that up to my wife, still to this day. I follow the Food Network constantly, looking for new ideas to kick my meals up a notch or two. And, yeah…I’ve always thought a psycho chef idea going after the dude that ruined him would be a cool idea. And we all know how sometimes (or assloads of times) when I’m really looking forward to an interesting and intriguing premise, I will usually wind up extremely disappointed if not totally pissed off at the way it was executed on screen.

So how happy am I with this go-round? Let’s just say that two months into this new year here, I have a new favorite horror DVD release for 2011…how’s that grab you? This flick is not the “torture p*rn” (hate that f*cking term) that it may sound like – we’re not dealing with a SAW series here – this is an intelligently written indie horror movie with something to say…basically, can’t we all be human to other humans? How so, you may or may not ask? Simple…our d-bag blogger, Franks, is the type of dude who would undercook toast and overcook boiling water – he can’t cook to save his ass. But yet he has the right to not only destroy another man’s career with his hateful, obnoxious blogging, but also that man’s life in general. Oh yeah, this dude has his platter of crow coming to him in more ways than one.

LAST WORDS:
I have to admit that I was worried at first, but those worries faded fast. This is indie horror at its finest…two kickass leads that play perfectly off each other, it’s paced very well (I was never bored once), the humor is as black as the inside of a pepper grinder, and it has a message that is anything but heavy handed or preachy – basically, think before you speak, because you never know what kind of effect your words will have on someone else’s life. I wonder if that goes for movie critics too? But, I digress…this flick is available everywhere now, and more than deserves to be in your collection. Take my word for it here folks…this feast will leave you with anything but a bitter taste.