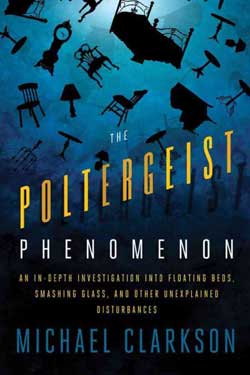 The Poltergeist Phenomenon: An In-depth Investigation Into Floating Beds, Smashing Glass, and Other Unexplained Disturbances

Have you heard a good ghost story lately? Afraid of things that go bump in the night? Have trouble seperating fiction from reality? Well you might be just the kind of reader that Clarkson has created this very piece for. The Poltergeist Phenomenon is no read of fiction. At least from where Clarkson is standing. He has spent years reviewing over 75 cases of paranormal activity to bring it under the roof of this latest release. I’ve spent my time reading ghost stories in the past. Though as scary as they may be, nothing beats the thrill of something that claims to be from real experience. As you pursue and read thru each chapter this unknowing feeling may start to raise a few hairs as each chapter or report is told from a researched perspective.

The kind that the observer reports the facts and leaves the rest to us to take in. Tales of floating objects, ghosts appearances, reoccurring moments through the house and a smattering of some pretty believable tales makes for an exciting read. And what is most fascinating is that many of the occurrences were backed up by professionals, police officers and multiple observers that suggest more on the side of real occurrences, the unexplained and general polter activity.

Clarkson doesn’t stop with ghost reports, he takes it a step further into research into the paranormal physic, Telekinesis, PK, moving objects and all manners of mind control phenomena whether true of hoax. He delves into the research of Randi and the misunderstanding of Uri Gellar. He even brings us pop culture, the Amityville horror and some aspects of exorcism. From the studies Clarkson bring us some common traits that have culminated form his collection of personal experiences. This points to puberty, epilepsy and the occurrences of an innate rare energy we all possess. Studies point to cases that were both successful and fraudulent under the microscope of University studies.

Books like this not only server that curious boy within me but also drive home the idea that we are not of only mind and body. Can the spirit survive, does the reports suggest another realm, another portal or another life waiting beyond? perhaps. After life readers will welcome the observations to back up there own theories and notions. It really is an incredible read that might be just what you need to scare, comfort or drive home your own beliefs.

A poltergeist is defined as a disturbance or energy with bizarre physical effects of paranormal origin that suggest mischievous or destructive intent, such as breaking or moving objects and loud knocks or noises.

The Poltergeist Phenomenon is an exciting, original look at an old subject by an award-winning investigative reporter. The author has reviewed 75 cases and interviewed hundreds of witnesses, paranormal experts, law enforcement officers, psychologists and skeptics to come up with eye-opening results:

The typical poltergeist case involves a young person from a repressed home who is going through puberty. He or she may have epilepsy, which produces recurrent spontaneous psychokinesis, a state in which gravity is temporarily suspended.

A respected former Princeton University scientist believes he has proven in laboratory experiments that psychokinesis exists and that poltergeist cases are probably true.

This rare energy may be part of a person’s fight-or-flight system, which is hardwired into everyone and can erupt in certain conditions