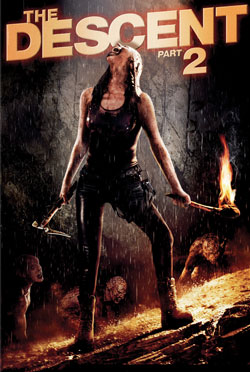 Distraught, confused, and half-wild with fear, Sarah Carter emerges alone from the Appalachian cave system where she encountered unspeakable terrors. Unable to plausibly explain to the authorities what happened – or why she’s covered in her friends’ blood – Sarah is forced back to the subterranean depths to help locate her five missing companions. As the rescue party drives deeper into uncharted caverns, nightmarish visions of the recent past begin to haunt Sarah and she starts to realize the full horror and futility of the mission. Subjected to the suspicion and mistrust of the group and confronted once more by the inbred, feral and savagely ruthless Crawlers, Sarah must draw on all her inner reserves of strength and courage in a desperate final struggle for deliverance and redemption.

Alot of first time runner horror success films seem to be popping up with sequels this year. The Descent part 2 is no exception. This follow up is helmed by director Jon Harris which I’m surprised considering the first one was directed and written by Neil Marshall. 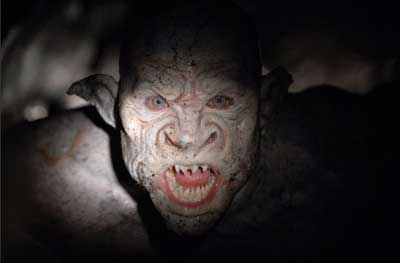 The good news is the film returns with all the bases in tact. The violence, the gore, the surprises, and the femme fatale stop till nothing attitude. In fact, the premise has (Shauna Macdonald) Sarah Carter the survivor from the first film showing up covered in blood and running for her life complete with a temporary case of amnesia. When the local authorities pick her up and find that the blood over her is not her own they put 2 and 2 together to determine that she is from the missing pack of females who set out to excavate caves. 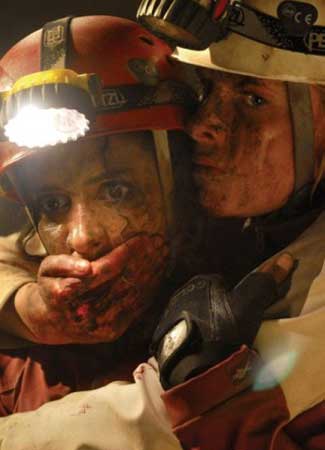 The local sheriff, his deputy and a small group of cave seekers require Sarah as they head back to the area she was found to look for survivors. Sarah reluctant to go, senses that danger lies ahead though without any real recollection. The team heads deep into the caverns again by way of an old elevator shaft and head into the recesses of underground caves. There is a touch of power struggle that occurs as the sheriff and his no care attitude botches up the search by carelessly firing his gun causing some of the tunnels to cave in.

I think it all works rather well as a suitable reason for revisiting the same circumstances as the first film. There is an enhanced reason for dread as they start to come upon some of the girls bodies who are left for dead, eaten, decayed and obviously torn apart in sections. A few segments will leave some with pretty chilling after thoughts upon seeing.

Sarah begins of course to regain her memory in segments which also perks her into survival mode. The haphazard team finds that its a different world down there with extremely violent beasts waiting to feast, kill and attack without mercy. Their only advantage against them is the fact that the beasts can’t see…. and search by sound. If you didn’t get enough of them the first round then you’ll get plenty of up close views this one usually accompanied by out of the dark lunges.

Sarah quickly takes the lead with her sense of familiarity in the caves below that saved her the first round. The all too familiar approach to using a cam corder with night vision appears as well. I’ve seen this used quite a bit as of late in other films which tells me that this particular aspect is working but might also have become a bit tired. Then again, dark places are dark places……so without a flashlight we wouldn’t have much to see. 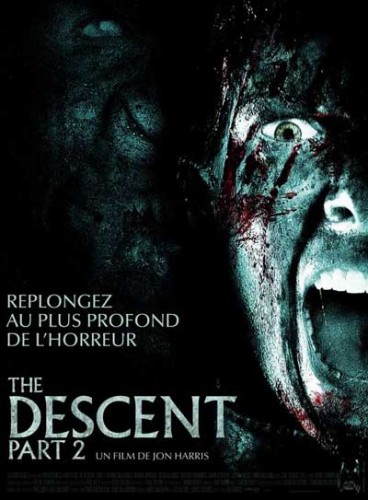 We’ll find alot of previous scenes and areas that return form the first film, though it all works rather well and still keeps alot of the same fear factor approach they used in “Descent”. Most notably is the camera shots that reveal an uninvited visitor lurking in the background used quite often at times. Decent 2 supplies a heavy load of mayhem and bloodletting which I believe also may even overshadow its previous film in bucket count and upon using some different filmmaking teams still meets the mark.

I endured plenty of jump moments to be able to say that this film has no shortage of them on hand. I dug a little deeper and found that director Jon Harris was actually the editor on “The Descent“. His credits include the recent “Eden Lake” and the upcoming “Kick Ass”(2010). So we’re in good hands on that front. 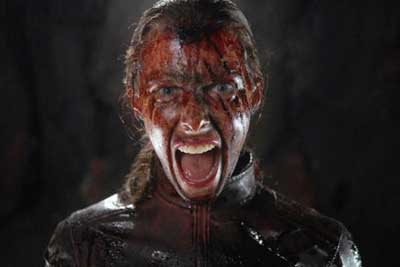 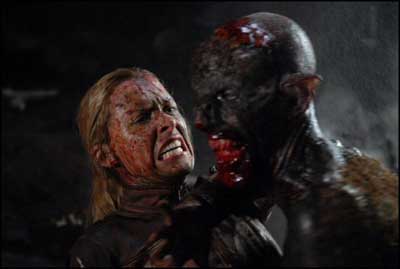 Other cast members this time include: Krysten Cummings, Gavan O’Herlihy, Gavan O’Herlihy, Anna Skellern and Douglas Hodge. I’d also like to point out without giving it away, there is a few questions that get answered this round to the audiences satisfaction. Descent 2 is a bold, gruesome follow up both satisfying and harrowing. Thrilling at every corner! 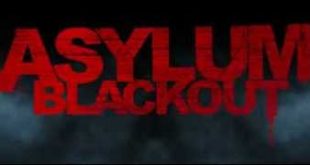