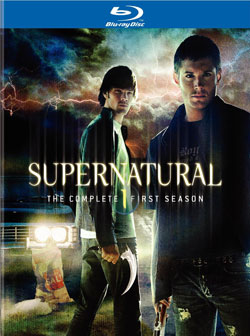 This television drama is about two brothers, Sam and Dean, who were raised by their father, John, to hunt and kill all things that go “bump in the night” after his wife, Mary, was murdered by something supernaturally evil when the boys were young. 22 years later the brothers set out on a journey, fighting evil along the way, to find their recently missing father who, when they finally meet up with, reveals he knows what killed their mother, a demon, and has found a way to track and kill it. Meanwhile, Sam starts to develop frightening abilities that include death visions, visions of people dying before it actually happens. These visions are somehow connected to the demon who murdered his mother and it’s mysterious plans that seem to be all about Sam. When their father dies striking a deal with the very same devil that had killed his wife, the brothers, now alone and without their mentor, are determined to finish the crusade their father started. But disturbing revelations about Sam’s part in the demon’s apocalyptic plans are presented when John’s dying last words to Dean are revealed.

The hottest show to hit television arrives with a impressive blue ray format. For those who haven’t been following the series, this might be the best place to start. As the show now going on it’s 5th season follows a harrowing legacy of the Winchester family with focus on the 2 brothers Sam (Jared Padalecki) and Dean Winchester (Jensen Ackles). The series has run its course over several levels of progress that takes the boys on travels that far exceed the expectations when the series has its first run. This first year however is special in itself, in that it establishes the beginnings, and the creature of the week scenarios often made popular form previous similar tv shows like “Kolchak”, X-files” and”Millennium”. What makes this series different is that it focuses almost entirely on supernatural elements and monsters from folklore, tales and legend. Call it the urban legends gone wild series.

As we open upon the series, Sam is trying to make ends meet in college, while Dean is in full “Hunter” mode. The 2 end up teaming up knowing what awaits out there to in the darkness as a force to be reckoned with. Always on the road, never really settling down for too long…they peruse the newspapers to find situations that sound out of the ordinary. Jobs aren’t an option, as they make due getting by in hotels, stolen credit cards and anumber of fake id’s.

Their knowledge in the supernatural fields give them an edge to recognize rogue spirits, creatures and demons that everyday folk would otherwise assume don’t exist. A trunk full of weapons, rock salt and trinkets provide all they need to get the job done. In some ways, it provides an ongoing sense of humor that always ends with “salting the bones and burning” to finish the jobs. What is great about this series is that it almost runs like a virtual textbook of mythical beasts. Reapers, Wendigos, Black dogs, demons…..the list goes on. Sam and Dean in the meantime try and deal with their differences in personality, the search for their absent father John, a strange sense of psychic abilities that Sam is beginning to develop and the legacy of their mother dying per a yellow eyed demon. “Hunters” is the name that folks like them have taken on. They find they are not alone in there quest for the banishment of evil things as they meet several more that share in there interest as well.

The theme of their missing father lays the tension groundwork for the season that has them looking into clues along the way. They also learn about a legendary gun created by Samuel Colt that possess the power to rid the master demon. All in all, this build up of creatures and demons lays the foundation for the seasons ahead which get incrementally more involved and deeper into the subjects of otherworldly things. A full season also allows time to introduce new players to the game and friends of the family legacy. Supernatural has an ability to go from lighthearted to scary episodes. With the internet at there fingertips, they figure things out pretty quick and save the day.

Each episode is noted for its use of classic rock songs, their vehicle of choise…the impala and the joking nature at times that Dean brings to the table. FX work is some of the best of television, and the choice of creatures is equal to any feature film presentation.

What also adds to the nature of this series is that we learn about the boys in slow increments rather than a full summary of information. The bond between brothers is as close as it gets often risking life for each other on numerous occasions. Supernatural is not only a recommendation ….its a must see beginning with Season 1. But if you ask me, you wont stop there once you’ve started. The best that TV has to offer and the best thing since the x-files series went off the air.