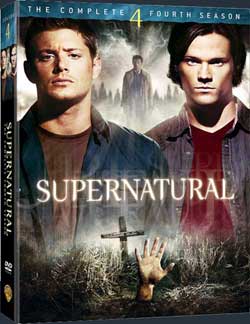 Brothers Sam (Jared Padalecki) and Dean (Jensen Ackles) roam the earth in search of demons in the fourth season of this hair-raising hit show. Sam searches for a way to save Dean from the bargain he made — his soul in exchange for Sam’s life. And as the war against the demons draws near, the brothers continue to investigate paranormal events as they confront their roles as saviors of mankind. Rachel Pattee and Alona Tal co-star.
Starring: Jared Padalecki, Jensen Ackles

An exciting time indeed for television, as the runaway hit series “Supernatural” completes its fourth season for the Winchester boys. It’s not only that they are constantly at war with creatures, monsters and dark forces but that the writers keep the pace by throwing a new theme each season. To be honest I wasn’t sure where and how they would keep taking this and then they hit us with the heaven vs hell season. Yep last time we checked Dean got sent to hell and the master demon Lilith was there to send him.

So how is it that the new season starts with Dean being set free and by whom? What happened during his stay in hell? Who are these all powerful beings that hold an interest in the Winchesters and what master plan is unfolding in great detail under their noses?

Well it’s no surprise that season 4 is biggest challenge the brothers have had to face. Angels are in the game now which somehow have Sam and Dean at the center of an upcoming apocalypse. Dean rescued by the hand of an all powerful angel known as Castiel has arrived on earth to aid the boys and investigate the recent events that has heaven worried an the demons scurrying about.

Dean as it appears, is somewhat of the chosen one while his brother Sam has grown a pretty habitual addiction to demon’s blood which fuels his psychic powers and enables him to send demons back to hell. Not only has Sam grown powerful but at the fear of the angels whom Dean must try and stop from evolving. Ruby is in the picture again but under a new body and persona who is intent on helping the Winchester as well. Dean tries to deal with his brothers changes and the fact that he himself spent quite a long time down in hell. While the ordeal went on for months, the reality for Dean was closer to 40 years in the abyss.

Though as the tension mounts and evolves in the lives of these 2 brothers and everyone they come across around them, we seem to get a little more behind the scenes background as the days pass. Demons get meaner, more powerful ones arise and hell on earth seems to be rapidly approaching with evil stalking the lands.

This and the fact that angels keep showing up to drop hints at what is to be done becomes way to much for the brothers to endure. Conflicts of interest arise, family legacies are revealed and not all is as it seems. This is the pace of the series that keeps you glued form episode to episode. With the inclusion of actor Misha Collins as Castiel, the bar has been raised with a new enigmatic personality who only reveals his intentions as time moves forward. Castiel has his own issues to deal with as well which involves heavens law and order. But where there’s one Angel there’s more to follow. A sub story develops that falls under the war in heaven chronology bringing a whole new depth to the series.

As the seals are broken by Lilith and her minions, can the boys save enough to keep Lucifer from arriving on earth? And for those who just like the one-off ghost / monster hunts…there is plenty of those this season as well. Gone are a few characters from the previous season who I believe some will be missed while others just not so much.

Supernatural stars Jared Padalecki as Sam Winchester, Jensen Ackles as Dean Winchester, Jeffrey Dean Morgan as John Winchester, and Jim Beaver as Bobby Singer. Ruby played by Katie Cassidy last season is revived under actress Genevieve Cortese. And somewhere in between a whole slew of characters pop up her and there. Angels, demons, acquaintances and those in the moment find a notch in the belt of the brothers who continue to hunt and exterminate things not of this world.

Season 4 is in short brilliant! The writers have outdone themselves with compelling stories, characters and a bigger than life plot line. What is more incredible is the writer’s ability to top each season with a higher level of tension. With season 5 rumored to be the last season, I only hope that the fans will keep the demand high enough to prevent that reality. While i’ll admit this being my favorite show on television, the key lies in the actors chemistry and the content which combines horror, action, drama and even a touch of sci fi into a story that never lets down. Supernatural season 4 is a must have…..but only after picking up the first 3 seasons as well. Fans will enjoy the extras which include a 3 section feature on heaven and hell. Gag reels and unaired scenes which top it off nicely.

Get ready for Season 5 as the Winchesters are Back!