While I was vacationing from the Night Shift it kept calling me back so I really didn’t have a choice I need to write so here I am again. Not sure if it is just the lower cost of HD filming or what but Buffalo NY has gotten very busy and will keep being busy making horror films as the year goes on. I will do my best to get some interviews and pictures from the upcoming movies and some tales from behind the scenes. 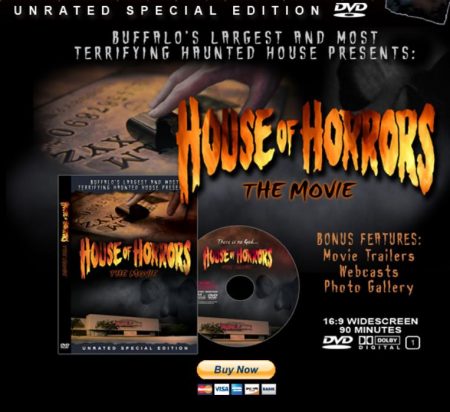 The first film is called “House of Horrors” and is movie based on the popular Halloween haunted house. The film promises some scares and lots of blood and should be ready for release come next October. The production is headed by writer/director/producer Dan Monroe. The makeup effects will be handled by Marleefx, Zombified Studios and Matthew Patterson For more information check out their website.
houseofhorrorsmovie.com/

The second movie “Born to Die” while not a horror movie is a biker movie with lots of blood. Jay Mager is the writer/director (did the short movie “The Pigman”, which I enjoyed very much.) Zombified Studios, Matthew Patterson and JFK productions will be handling the makeup effects.
www.myspace.com/borntodiethemovie

Deftone Pictures Studios will be bringing to the screen “Gore” about a hunchbacked serial killer which is a throw back to the slasher movies of the 80’s. Written and directed by Adam Steigert and Stephanie Wlosinski. Special makeup effects by Zombified Studios, Matthew Patterson and JFK productions.
www.myspace.com/deftonepicturesmovies

Buffalo Nickel Productions are producing the zombie anthology “Decayed”. The movie is written and produced by Emil Novak. The makeup effects will be supervised by Andrew Lavin.

“Revenge Asylum” To be produced and directed by Patrick Lonzi and written by Tracie Fleichhut.
www.revengeasylum.com/

There are rumors of a sci-fi movie and Low Budget Pictures making an epic with all their characters. I will be following most of these movies from start to wild end. Hopefully they will all be coming to a theatre near you next year. And of course there will be lots of cake