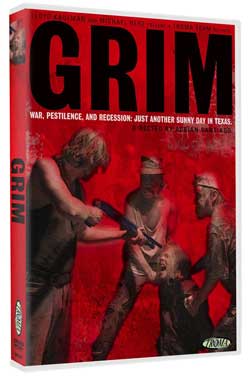 Young Nicholas Grim is forced to witness the brutal murder of his parents by Armed Militant Forces in Texas. Now an adult, Grim vows to avenge his family and uncover their killer’s motives.

Good day to you my acolytes & those who are soon to be acolytes. Your accommodations in my acolyte barracks is ready & awaiting your souls for indoctrination into my ever expanding army. The time is coming, sooner than all of you think. You guys ought to side with the winning team now. It’s Monday morning here in NY where my mausoleum is located and the weather is actually pretty nice for a change. This of course sucks. I like the gloomy grey skies & the seemingly endless assault on NY by wave after wave of snow. Fortunately, there is another winter storm arriving tomorrow evening. I am excited…

But life can’t be all good can it? Sometimes I have to endure the hardships of watching movies that aren’t particularly entertaining so as to warn all of you, my readers, to stay away from. Last week it was “The Rite”, a supremely disappointing feature film that nearly bored me to sleep. Today it’s “Grim”, proof that my editor hates me for sure. Oh yeah..he hates me all right, Why? I dunno. I’ve been so kind to him. perhaps a visit from The Black Saint will help him to see the error of his ways…

Anyhow, “Grim” tells the tale of young Nicholas Grim who is witness to the murder of his parents at a very young age in a field. The people who killed his parents are members of the “UAB”, a corrupt militia based in Texas. You see, it seems that in the future the economy of the U.S.A. is in the crapper & the government can no longer support rural, low population areas of the nation. Because of this, these areas are left to fend for themselves. This of course leads to the formation of local militias & strongmen leading them. There are of course, local disputes amidst these rival factions as well. The film opens up with young Nicholas Grim in the back of a pickup truck with his parents, being driven to an out of the way spot in the backwoods of Texas by 3 armed men. His parents, George & Julianne are to be summarily executed for allegedly “Crossing the UAB” (United American Brigade). As the ringleader puts it “George could’ve been our buddy but he chose to be our enemy instead”. Typically of this kind of movie, before George is beaten & shot to death, he tells his murderers that he will be waiting for them “in hell”. How original is that? His wife is shot & killed as well but young Nicholas is spared although he is cracked on the dome with a wrench & left to die in the woods.

A few hours later he is found by a man named Alan who is hunting for game, who promptly scoops him up & takes him home to his wife, Rose. There they clean the boy up & decide to adopt him as their own son. Alan teaches Grim (they refer to him as Grim & not Nicholas) how to fire a rifle with the advice that he should “Never laugh at a man holding a gun”. It turns out that Grim is a pretty good shot as well.

Fade to 9-10 years later & Grim is a young man (he actually looks like he’s in his mid 20’s) & he is thanking Alan & Rose for saving his life. It is then that he’s told the truth of what’s been going on in the U.S.A. with the opening lines “They say that ten poor men can sleep peacefully on a single pile of hay, but there’s no empire big enough for two kings”. I actually kind of like that line, don’t know if it’s original but I likeit anyways. Then he is told of the “greedy politicians” who kept taking “more & more” until the government was attacked by “1000 well armed men & women”, all of them shot down. The movement may have failed but it did spawn a multitude of copycat groups across the country. The U.A.B. was one of them. Alan & Rose’s son joined up with them which eventually led to his death. He tells Grim of how he was the sheriff until the U.A.B. rolled into town led by one Atticus Miller. He also tells Grim that he murdered his son rather than have him fall in with a bunch of rabble rousers like the members of the U.A.B. Grim, oddly enough after seeing his own parents murdered, tells Alan that he did the “right thing” in murdering his son. At this point Alan sends Grim off to take a shovel out to “Old Joe”. While Grim is away, the U.A.B. pays the Rose household a visit. Atticus is looking for Alan to join up with the U.A.B. He asks Alan to help “build a new nation from the shallow grave wall street has left it in”. Of course, Alan declines & is promptly shot along with his wife. Now Grim has lost two sets of parents to Atticus & the UAB & he’s out for revenge.

That’s it, I can’t stand any more! “Grim” arrives with the tagline “War, Pestilence & Recession. Just another sunny day in Texas”. It sounds cool but in actuality it all adds up to a crashing bore. Director Adrien Santiago has a bunch of cool ideas but what he doesn’t have is the budget to bring any of them to life. Nearly all of “Grim’ is comprised of verbal exposition to further the plot along. Which is boring in & of itself but when you throw in actors that flub their lines repeatedly, or are distracted by flies crawling on their faces while they’re trying to recite these lines you get something a little extra boring for your trouble. He tries to spice up the proceedings with some “Fight Club” style shenanigans & some moderate arterial sprays every now and again but there is so much talking with nothing going on in this f*cking movie that I challenge anyone to stay awake for it’s full running time of 96 minutes. It lurches from set to set with a bunch of bad actors doing their best to make it feel epic. But it isn’t. It just lays there like a pile of cow sh*t laying in the Texas heat, stinking up whatever TV you’re watching it on. 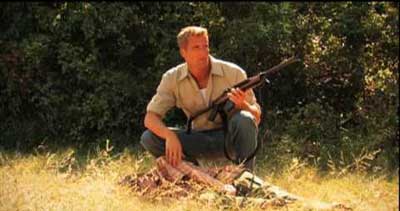 For the record, Grim is played by Christopher Dimock & although he is uninspired to say the least, he’s the best actor in the bunch. I also found it kind of funny that his adoptive parents apparently found the fountain of youth because they did not age one iota in the 9-10 years (their estimate) that they had Grim. Must’ve been that good ole’ Texas sunshine preserving them. Director Santiago doesn’t even have the good sense to throw in some stock footage of riots or something in the film to spice it up a little. Again, he lets his actors describe the tumult going on in the nation, and they are so boring. It took me almost a week to finally finish “Grim” & everytime I restarted it, I did from a few minutes before I left off so as to familiarize myself with something I might have missed. Anything to make the film a little better. I even pretty much rewatched the whole f*cking thing before writing this. I just barely made it, it took me nearly 3 hours to watch it all in one sitting. It is one unholy, boring, unnecessary mess of a movie. Santiago is listed as the director, writer, editor & producer of “Grim” and the only thing he does marginally well is the editing of the film. It ain’t half bad in that sense, It’s edited pretty well.

But when most of your editing involves scenes of people talking about what’s going on around them & not showing it, editing might not be so hard to do. And as to the ending…? What ending? “Grim” puts the proverbial nail in the coffin with a non-ending that infuriated me & possibly leaves the door open to a sequel. I’m pretty sure that abomination will never happen because honestly, who’s gonna see “Grim” besides Santiago, his family & the actors who performed in the film? I’m pretty sure they’re all going to want to take it off their respective bio’s when looking for future work. “Grim” is an abomination of the worst kind. A movie that promises action & an interesting story and delivers none of that. A cinematic crime in my eyes.

The Black Saint is blessing “Grim” with 1/2 shroud. Mainly because of it’s okay editing, That’s it. If you’re a fan of decent editing work on micro budget films then perhaps “Grim” is for you. I dare any of you to see it all in one sitting. It can’t be done I tell ya. Avoid at all costs. The Black Saint has now left the building…