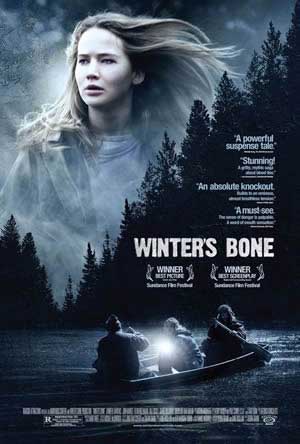 In a poverty-stricken Ozark Mountain community, young 17-year-old Ree Dolly (Jennifer Lawrence) is forced to fend for her entire family – two young siblings and a mentally disabled mother – entirely on her own when her father goes missing. When the police inform her that her father was arrested for running a meth lab and has jumped bail, she learns that her family may lose their home with nowhere to go and no one to turn to. Her only choice is to brave the criminal element surrounding her family to uncover her father’s whereabouts in order to protect her family – a dangerous choice met with fear, rejection and suspicion.

Winter’s Bone, directed by Debra Granik, is a slow motion emotional punch to the gut. The award wining indy film based on Daniel Woodrell’s 2006 novel of the same name carries you along the difficult, demanding journey that young Ree Dolly must endure to save her home and her family. It’s an engrossing coming-of-age tale that leaves you devastated and somber. The mountain landscape is vast but the characters are isolated from the outside world, living by their own rules and codes. With the audience in tow, Ree is left no choice but to stretch the boundaries of confines without breaking those rules, those codes to discover her father’s fate. It’s bleak and heartbreaking with its promising outcome overshadowed by the unforgiving reality that surrounds Ree and her family.

The strength of Winter’s Bone is the performances from the ensemble cast. Each character is painted on the screen bringing to life the poverty stricken community in which they live all the while avoiding stereotypes. The most notable is of course the lead, Jennifer Lawrence as Ree Dolly. This is her adventure, she is in every scene and the entire film rests on her shoulders. Her performance is the glue that binds each element along the way. It is an amazing, strong performance. She brings Ree a sadness, determination and understanding which is in her body language, her eyes and her dialog. Her character is hypnotizing, her adventure mesmerizing. He character is full of responsibility, resolve, strength and compassion. While she is never given much hope, she never succumbs to despair. Winter’s Bone relies on Ree to drive the narrative and envelope the emotional tapestry and Jennifer Lawrence delivers. And she is not the only actor in the film to do so.

Along with Ree, two other character display a deceptive amount of depth: Teardrop Dolly (John Hawkes), Ree’s uncle and Merab (Dale Dickey), the matriarch of the criminal family.  Each encounter Ree has with these two characters not only provides the film with intense confrontational moments but also provides Ree’s life with character building example of family bonds, honor, customs and conduct. These two are in turn surrounded by an award winning (Best Ensemble Performance: 2010 Gotham Awards) cast of characters such as Garret Dillahunt as Sheriff Baskin, Sheryl Lee as April and Ronnie Hall as Thump Milton.

John Hawkes turns in an astounding, career defining performance as Teardrop. When he’s introduced, he is frightening – an unhinged, violent soul who has given up on life and is lost to anger and drugs. As the movie progresses, he begins to reveal an unanticipated breadth of character as he rescues and protects Ree as she faces off against the local criminal regime. He opens up to Ree, but still keeps a safe distance, not to protect himself, but to protect her.

Likewise, Dale Dickey as Merab is Teardrop’s opposite and his equal. She is the matriarch of the criminal family to which Ree and Teardrop have family ties and may be responsible for Ree’s father’s disappearance. She too is given the opportunity to bring more to the character than is initially inferred. She has a similar strength and imposing presence that Teardrop has as she fights to protect her family and reputation from the repercussions Ree’s investigation may bring. Somehow she is simultaneously uncaring and sympathetic to Ree’s predicament. It’s a riveting, complex role and Dale Dickey etches the character onto the screen – unforgettable.

The film is full of confrontations defined by character, confrontations that begin to also define Ree. At first she shows unbridled, unnurtured fortitude standing eye-to-eye to Merab not fully aware of the nature of interaction she is initiating. Later, when she is rescued by her uncle from the clutches of the mountain family, she witnesses the confrontation between Teardrop and Thump Milton. Its a quiet but intense confrontation, where the usually explosive Teardrop controls his emotions and the events, negotiating Ree’s release. Later, she is also witness to a confrontation between Teardrop and Sheriff Baskin where her uncle stands his ground once again. “Is this gonna be our time?” he challenges and Baskin backs away after a breathtaking pregnant pause. Later, Ree encounters Merab once again, but this time she is more confident in handling herself. This time things are different – for both characters – and Ree is now an equal of sorts.

Debra Granik’s direction is intelligent, focused and full of detail. She paints a cinematic canvas full of local color with a wide range of strokes. As much as the movie is character driven, the landscape is the overarching character trait of the film itself. These characters exist in this world. It drives them and they own it and both define each other. Granik captures this marvelously. She paces the story with a slow build, deliberately expanding out from Ree’s home with one character leading her directly to another. She reigns in the boundaries of this environment as well, never showing how life exists outside Ree’s world. We may get to see a school, the sheriff’s office or the recruitment hall, but these options are never a viable escape for Ree, no matter how hard she could ever try.

Winter’s Bone is a hard film to forget. Days after seeing the film, it sticks with you – haunting and heavy. The undying determination and drive of its lead character, Ree Dolly, is gripping countered by how devastating the world in which she lives has become. Her family gives her strength and she is the strength of her family. The film is rich with character: genuine, authentic and memorable. The story is direct, focused and desolate. The experience is extraordinary.