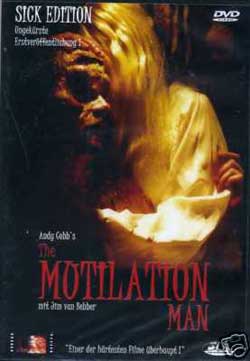 As a young boy, Terry underwent seeing his own father commit horrendous acts of crime such as rape and murder, even being forced to clean up and bury the mess of his slaughtered mother. The result of all this trauma shows itself all over the body of Terry Pucket in the form of self mutilation. Traveling from place to place putting on repulsive shows of self mutilation, Terry can’t seem to bury his horrible past.

Hell-o again, Hordes of gore hungry zombies. This review is for the experimental film project by Andrew Copp ( Writer/Director of The Atrocity Circle). This is an all out assault on the senses of sight, sound and sanity. A sick, metaphorical journey through the mind of the abused and tortured, as he physically tortures himself.

This documentary style, experimental film follows Ivan, Also known as, The Mutilation Man. He has an underground circus type sideshow of himself in which he cuts his arms and body to bloody shreds. In the midst of this brutal form of entertainment for the sadistically twisted, he also connects chains to his body before pulling them out and bleeding for the pleasure of others. Along his traveling self mutilation fest, he has memories of his childhood and fantasies of sex and other dark delicacies. The film goes from reality, to dreams of the past and to dark wandering regions within his mind. He buries himself (or an image of…) as a child and continues to think back of his abusive father, played by Jim Van Bebber (Writer/Director of Deadbeat at Dawn, My Sweet Satan, Roadkill, Charlie’s family… later known as The Manson Family and some music videos by the Horror influenced Death Metal Band, Necrophagia). He sees cannibals devouring a body along the way, with many other dark realms of the world around him. This is known by the Director, Andrew Copp as his “pieces of decaying memory.”

There is actual film footage of children atrocities cut within to add another level of dread to the unseasoned Horror audience. The film as a whole reminds me of a f*cked up version of Pink Floyd’s The Wall or Eric Stanze’s (Director of Scrapbook) Ice from the Sun. There is barely any spoken word throughout the film. Just brutally graphic scenes of disturbing imagery and industrial music. If there is only one thing that I could not watch, it was all of the full frontal male nudity. I’m sure the ladies will enjoy, although the violence overpowers it, which is a plus for me. The two are evened out with female nudity as well. This film is raw repulsion at it’s disturbing best, with four years in the making under its belt, or film can.

The visual film presentation switches from blurry, to shaky, to grainy. It was shot on sixteen millimeter and super eight, before being transferred to film. Some of the grainy effects and striped screen were made by filming previously filmed footage from television, such as Rob Zombie did in House of 1,000 Corpses. A huge inspiration in the making was Natural Born Killers, as it seemed to get away with changing the on-screen presentation so often… From black and white, to color, to grainy and so forth. 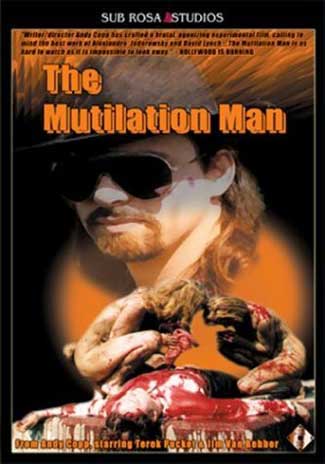 A lot of the feature’s transitional cuts were made by mistake or camera malfunction, but turned out great in the end. You would just think it was a creative way of cutting from one scene to the next. One cut was caused by the camera’s battery dying. Another was bestowed by the film running out, in which you can see the picture fade from light brown to white. Another is made possible from the camera’s film being exposed. These were all mistakes to the benefit of the film. The outcome is like something you most likely will not see anywhere else. Very unique and unintentional camera effects. The same redeemable error was made with an over looped voice-over of Jim Van Bebber from one scene into the next. The raging voice lingers over into the next shot, making it all the more creepy when viewing. Andrew also used footage from one of his earlier films for a continuation of a sex scene involving the same actress seen in this film.

The gore score is drenched with a ten and some of the most gruesomely executed effects for such a low budget. Andrew did some of the special effects himself. He had been pulling them off (such as myself) from age ten. He was kicked out of film school for making over the top shock films that were too disturbing for the class to handle. Very much like Jim Morrison in his time at UCLA film school. The classic Horror show host, Dr. Creep influenced him as a child to enjoy Horror and Mr. Creep himself was on hand at the premiere.

The extras on the DVD include behind the scenes footage during the making. There is a commentary track with Writer and Director, Andrew Copp. There are film trailers and deleted scenes. A music video by the band, The Azoic is included. An underground film project by Andrew’s film class, called The Underground Film Project is also on the special features, along with more information on Sub Rosa films.

If you can find this rare cult classic, and can stomach it… Give it a view. It’s well worth the insanely twisted experience. If you are the squeamish or have problems with films that are not glossed to Hollywood standards, this is not for your taste. Those with an open mind and strong stomach should check out this rare jewel if you get the chance. I give this film, The Mutilation Man, FOUR HORNS UP.

Until next time, this was Jay. Keep one foot in the grave, one fist in the guts and your eyes out for gore… Later.