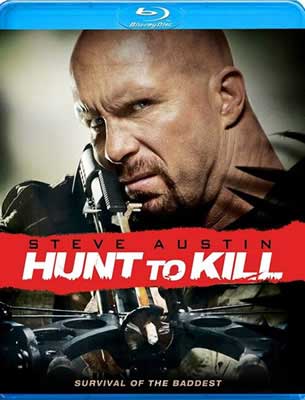 SYNOPSIS:
A group of unhinged outlaws kidnap a US Border Agent and his daughter to guide them through the rugged northern terrain in order to hunt down a rogue member who has stolen their loot and is trying to cross the border into Canada. After being left for dead and fearing for his daughter’s safety, US Border Agent Jim Rhodes tracks down the surviving members of the outlaw thieves before they can cross the border.

REVIEW:
Professional Wrestler “Stone Cold” Steve Austin stars as US Border Agent Jim Rhodes in this throwback to Eighties action flicks. The script twenty five years ago would be best suited for Arnold Schwarzenegger or Sylvester Stallone – or, perhaps, given the production values, Jean-Claude Van Dam or Steven Seagal. It wants to be a Schwarzenegger picture, but ends up more like a Chuck Norris b-movie. While it doesn’t quite rise to the level desired, the level it does achieve helps make it an entertaining action film. Ironically, three of Hunt to Kill’s stars (Austin, Gary Daniels and Eric Roberts) star in Stallone’s The Expendables (2010) released earlier this year –  which succeeds where this film falls flat. 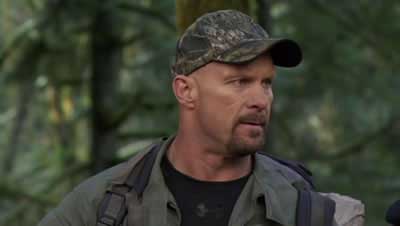 Hunt To Kill starts out with Austin’s Rhodes casing a meth-lab with co-agent, Davis (Eric Roberts), which goes south and Davis dies in an explosion. Sometime later, Rhodes is still mourning the loss of his friend, struggling through a divorce and is experiencing parenting drama with daughter Kim (Marie Avgeropoulos). His daughter ends up being in the wrong place at the wrong time and they both end up entangled in a hunt for a thief who stole millions from his fellow outlaws. This is about all the characterization Rhodes is afforded in the script; from here on out, it’s all about establishing how much he knows the local terrain and having him constantly add odds with the thieves who hold his daughter hostage. To his credit, Austin is totally believable in his role but he’s not given much to run with. It’s all cliche action hero stuff. The script holds no surprises and is very predictable – it’s Austin’s on screen presence that keeps the flick afloat through to the inevitable conclusion where he must face the lead gangster, Banks, one on one.

What starts out as a rocky relationship (and performance) between Rhodes and his daughter Kim, turns into a more successful-than-you-would-have-thought chemistry between Austin and Avgeropoulos. Once Avgeropoulos is allowed to expand beyond the initial trouble-making, confrontational daughter, the audience is allowed to root for her character and begin to fear for her safety. When they begin to work together, with Rhodes (thought dead, but silently hunter the kidnappers) is leaving hints on the forest floor that only his daughter would catch (or so we’re lead to believe) and Kim goading Banks on keeping his temper up and his guard down, the story begins to pick up the pace. Avgeropoulos brings what she can to the thankless role – her character is a bit one note. 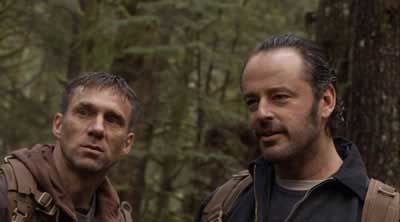 The bad guys are a ridiculous bunch of thieves, with Gil Bellows as Banks being the more overacted and over-dramatic of the bunch. He’s never as threatening as his is just nuts, predictable in his supposed unpredictability. Oooh, he’s so scary because he screams so loud. Sigh. It is an overwrought performance and he’s only a threat to Rhodes when he has a gun – without a weapon of some sort, he’s just a chap with an attitude. Gary Daniels as Bank’s right-hand-man Jensen is the real threat, imposing, silent (comparatively so) and built for action. When Daniels and Austin finally have their showdown, it’s the only true danger Rhodes encounters. The rest of the group is just silly and lame. They fit the bill and serve their purpose but they bring nothing new the genre.

Oddly, for an action film, there isn’t nearly enough action. There’s no real chase scene and there’s only one good fight scene to speak of. With “Stone Cold” Steve Austin starring, Hunt To Kill really misses the opportunity to have more fisticuffs. What we end up with is a lot of histrionics, idiotic banter and some close range gun-play. Bellows is miscast as Banks and over acts the role to parody, perhaps to the point of becoming entertaining because of it. It really is hard to believe that Rhodes would have snapped his neck from the onset and ended the whole ordeal right from the start. Or, if Banks was as unhinged as Bellows plays him, he would have put a bullet between Rhodes eyes right from the start. The flick benefits from some choice mountainous scenery and Austin’s stoic performance and screen presence. The direction by Keoni Waxman is more than adequate and never resorts to flashy tricks many action directors rely on these day and the cinematography by Tom Harting bring the forest terrain to life, especially when they reach the frozen water falls. Hunt To Kill ends up being an entertaining but underwhelming action film best suited for late night viewing on cable – probably with a beer or two handy.