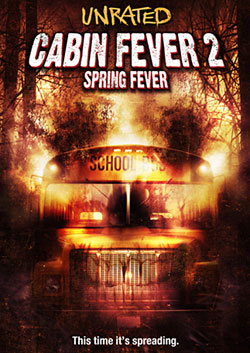 A high school prom faces a deadly threat: a flesh-eating virus that spreads via a popular brand of bottled water

When I first got word about Cabin Fever 2, that often feeling of recycling came over me much in the way that most sequels deliver. I did enjoy Cabin Fever 1 immensely but had some doubts about a sequel. Though the trailers looked pretty good and the marketing efforts seemed to be high so I told myself, maybe its worth a viewing. 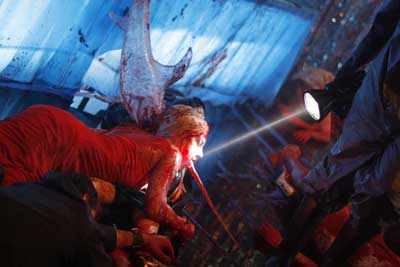 From the get go and moving forward at a pretty rapid pace, I was pleasantly surprised for a number of different reasons. One, this one was funny. Not the cheesy stupid kind but more in a 80’s Porky’s direction which I’m still a sucker for even 20 years later. Had the film become a horror comedy? …yes and no. To back up that statement ….there is alot of gore in the film. Yes alot…and add to that alot of killing gross out moments with some stuff that’s even hard to watch on screen. The nail peeling scene was actually one for me. But for gore hounds ……your gonna love this one! 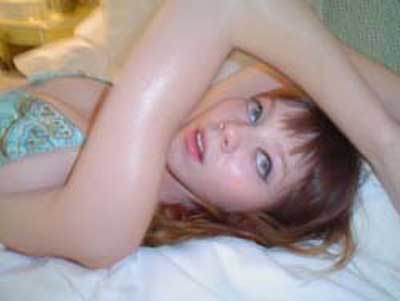 Now at this point I’m guessing most audiences are getting bored to death with zombies films. Cabin Fever 2 is no zombie film but the characters do get infected by some nasty rouge diseased water that happened to make its way past the purification plants. Ok, take that idea and combine it with “Carrie” then up that 10 notches and throw in some romantically tragic and sometimes cute 80s humor and you’ll find yourself pretty close to a fit. The film actually doesn’t even make the 90 minute mark but it does throw in alot of eggs and alot of fast moving scenes. 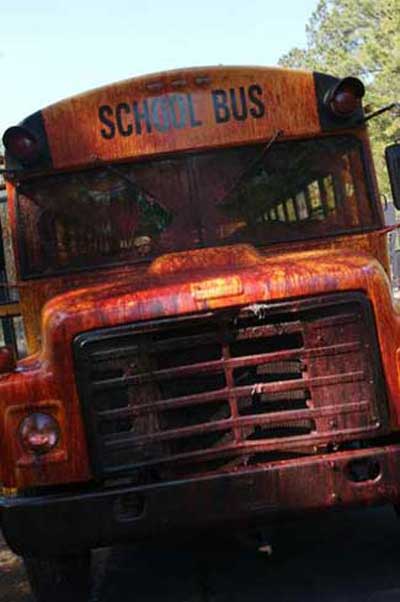 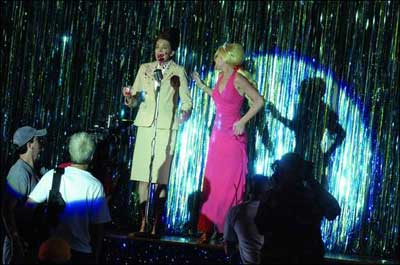 At the heart we have the geeks, the ass hole, the prom queen, the slut, the nice guy next door and the pretty geeky girl who’s kind of hot once you get to know her. A prom is just around the corner and the geeks are debating either attending the prom or spending a night watching the latest banned horror film release. In there pathetic but sometimes hip way they manage to make a few connections, get the girl and almost avoid being shot in the head by the military chemical outbreak crew. In fact what is so interesting is that a young nubile scene such as getting laid for the first time quickly turns into a blood bath, gut puking skin eroding sequence. 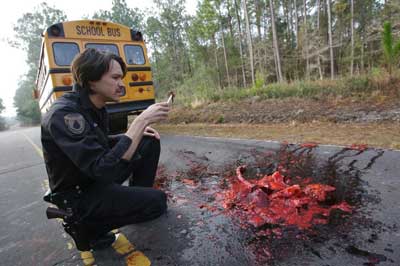 You don’t know whether to laugh, cringe or high five…all in one. Within the first 5 minutes, a diseased victim emerges from the infected water and is splattered into soup per a traveling school bus. The infected water is presented per animation titles that show it traveling from destination to destination. The closer of the the film does the same by telling alot with a little. Can anyone say Cabin Fever 3? I’ll bet hard cash on that one. 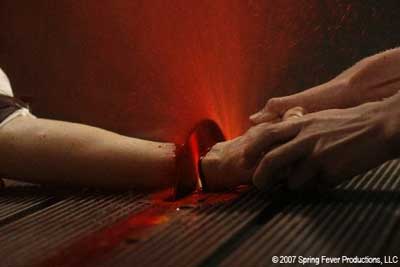 For these reasons, Cabin Fever 2 is in many ways genius in its approach. Directed by Ti West, the film is a complete turn around of a film than his just as recent “House of the Devil”. It appears that Ti has an affinity with what I want to call period pieces, but are more feelings from decades past. 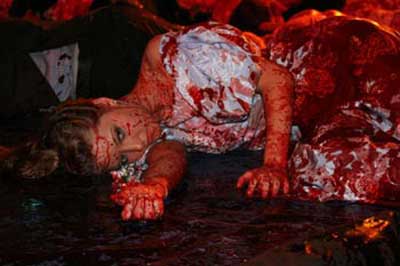 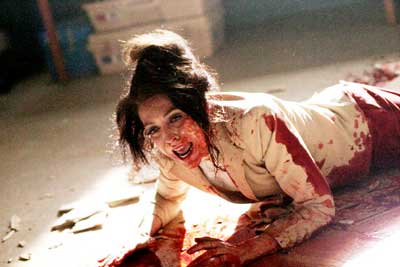 The film has alot of great fx gags that work real smooth for the desired effects at hand. There’s plenty of action which is thrown into the trilogy love affair of high school students script at a unique and watchable blend. If you have any doubts, give this one a go its absurd, party gore at its best!