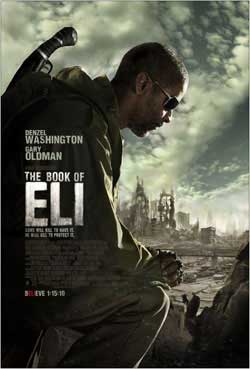 Eli (Denzel Washington) has been on a journey for 30 years, walking west across America after a cataclysmic war that turned the earth into a total wasteland. The world has become a lawless civilization where people must kill or be killed. The barren roads belong to gangs of cutthroats who rob and kill for water, a pair of shoes, a lighter, or just for fun. Eli is a peaceful man who only acts in self defense, and becomes a warrior with unbelievable killing skills when he is challenged. After the war and the “Big Flash”, Eli was guided by a higher power to a hidden book and given the task of protecting the book and taking it to its final destination. Eli guards the book with his life, because he knows that the book is the only hope that humanity has for its future.

This post apocalyptic theme film comes 30 years after America has turned to war and left the planet in waste. Eli played by Denzel Washington is a roaming nomad who has but 1 destination. To head west until he finds his place and protect a book that is man’s answer to saving itself. Peaceful, but also a fierce warrior able to take out entire packs on his own, Eli must cross the country and face off against thieves, killers and gangs. His trusty knife and some fast moves prove to be enough to protect him against the odds. In fact it’s assumed on some level that Eli comes from a highly trained military background as his skills are way to perfect for a ordinary civilian. I was reminded at times of the old Western gunslinger moments that Clint Eastwood handled so well.

The film maintains a blue and brown color theme to suggest a cold earth tone to its presentation. Gritty, dirty and rugged are goods ways to describe everyone and everything. Even a simple product as shampoo is a commodity rarely seen. As expected the stronger survive and the weak usually get robbed and killed.

The world has turned into carnage with rummage, wreckage and lack of food and water. Since money has no value, the remaining usually exchange in with bartering goods, services and sustenance. As Eli heads West he comes across a small town run by a local crime boss of sorts Carnegie (Gary Oldman). Carnegie is small time but organized enough for his little neck of the desert. A discovery of water locally has kept them moving forward and alive with the intent to grow and overtake. Carnegie pretty much does as he pleases with a strong crew of roughnecks at his side. He keeps Claudia (Jennifer Beals), a blind woman around as his mate while her daughter Solara helps to run the local tavern. When Eli comes upon the town, his simple pass thru is interrupted by Carnegie and his men. Carnegie is in search of a “book”, and when he discovers that Eli possesses 1, he stops at nothing to acquire it.

This book that Eli is intent on delivering to the West and the same one that Carnegie wants is less magical than anticipated. It doesn’t take too long to guess that the book is in fact a simple Bible, that is perhaps one of the last remaining few on Earth. When war broke out, many blamed the outbreak on the Bible and ordered all copies to be burned. Though the attraction comes in the form of the Bible being able to translate words into inspiration to gain followers among many.

I didn’t expect this film to be religious and on many levels it isn’t, but it does have a strong suggestive premise that includes Christianity. Not your usual approach but none-the-less there is a “message” within. This plot motive is a clever use of genres that embed a spiritual overlay on top of the whole thing.

Though if that discourages you, keep in mind this film has a heavy “Mad Max” meets old west flavor to it that keeps things exciting, violent at times and a formal playground for the talents of Gary Oldman and Denzel Washington. Mila Kunis provides a great adult driven role that really showcases her talents away from the comedy, That’s 70’s show staple and Family guy humor. I predict this film will open several more doors for her into the next arena. The original role was turned down by Twilight star Kristen Stewart.

Directed by Albert Hughes & Allen Hughes, the film provides a smart storyline with a heavy dose of action scenes. Gary Oldman returns with another bad guy role, that reminds us all what we like best about him. Denzel of course handles his role with the same confidence and carry thru that we are used to seeing with his inclusion. Book of Eli, is fresh , entertaining and creatively awesome!