From the Nightshift: I was a Middle Age Zombie for the FBI

I was a middle age zombie for the FBI

Life had put me in a funk and I decided to fight the feeling and force myself out of my comfort zone and do something I always had wanted to do with my life. Yes you guess it; I have always wanted to be a middle age man working for minimum wage in an area haunted house for the Halloween season. I don’t know what fantasies you have, but mine always involve scaring people. This probably is very telling and why I have no sex life.

I signed myself up at an R rated house, the first in our area. The real reason it is R rated is that the kids who work there say “f*ck” a lot, otherwise we are probably a PG 13. Maybe if we had a sex scene with zombies we could be cutting edge, who do I need to talk to? Finally all my dreams could come true.

The average age of the “scarers” in the house is about 19 which makes me about 100 years old. They all stare at me wondering why someone’s grand papa is at work. I think I scare them more than any zombie at the fair grounds would. Nothing worse than seeing someone “old” playing in their fun, I am sure it is unnerving. I find I get a lot of alone time and I am trying not to look like I am cruising the schoolyard. I have made friends with the makeup people and some of the braver scarers, who are much stranger than I am. One of them gave a lap dance to one of the skeleton, and wanted to know where his “boner” was. I was speechless for once.

When you are going through haunted houses as a spectator it always looks like the scarers have the easiest jobs in the world. I mean you walk around a corner and they start jumping out at you or screaming, how hard is that?
Well, it is hard, as most of the job is waiting, waiting and waiting. You wait in the house until the first person starts to come through for the night, you wait for them to turn that corner, and you wait for the next person and so on and so on. From about 6 pm to maybe 2 am in the morning you have been waiting, in a corner, or hiding behind a door. You are hot, sweating, tired and kids have been making fun of you in the later part of the evening. Your knees are giving out and what started as the funniest job in the world is now a test can you make it through the whole night before saying uncle, and many of the kids do say uncle. I have had some people leave me at 9pm or 11pm and never come back from their break. You may be suddenly asked to sign forms from the production staff as you can hear people coming nearer to you and wondering if you can write and scare at the same time (unless you are an accountant you can’t). You will find a lot of confusion and a lot of drama and a lot of jerks around.

One night I played a character that was locked in a room and I played him as someone swearing he wasn’t inflected by the zombie virus until I was shot down by off stage gun fire. I hit the ground hard everytime and was pretty happy I could still do stunts until it started to dawn on me that I would have to keep doing this until the early hours of the morning. I couldn’t move the next day I was in so much pain from falling about 40-50 times. Not one of my brighter moments. Black and blue should be only from your makeup not from inside.

Later I got to be a zombie with full makeup, full glorious makeup First I was eating an intestine of another character who was screaming for me to stop, just like in the zombie movies. The first evening I played the zombie the scene went well but the second night kids started with oral sex jokes and just won’t stop. Or that I was eating sausages and after hearing “sausage fest” from a kid about twenty times I was ready to rip people in half, so we changed it to just jumping out at people. The appearing from no way and yelling “boo” works on about 65% of the people and the rest just can’t be startled. Some people come for a good time to be scared and to laugh with their friends and that is your target audience. They make it fun for all of us.

Then are some people who are only there to be jerks, to show their friends that they are cool. I almost got poked in the eye by one guy who figured I would show up at this peek hole and put his hand all the way through, I almost bit him which I am sure would have gotten me sued, but he wouldn’t think it was funny then.

Thankfully there are more fun people than jerks and I didn’t mind some of the creative comments. I jumped out at one girl and she mouthed “Hello, I love you” to me, which caught me off guard. Some people say “hello” or “wow that is really cool”. 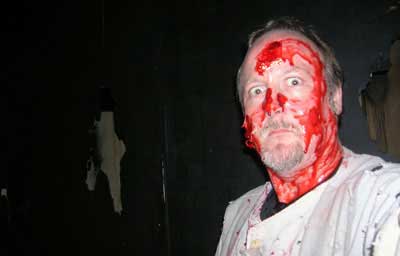 One of the most interesting parts was having to stay in character as a zombie and walking to the bathrooms to take a break and finding out that zombies are really, really slow. The other thing I learned is that the nicest people, the people who come for a good time and have nothing to prove come around 8-10pm at night and when I go for bathroom break and walk in zombie fashion across the houses girls scream and run, which for the first time in my life is a reaction I am looking for.

All and all I still had fun at the fair and will be back to play a zombie again at least one more time before the season is over, hopefully I will see you some night around 8-10pm.

Maybe you could bring the cake, its always better with cake.