Coscom brings blood and guts in new War of the Worlds 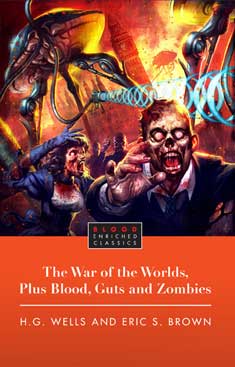 The War of the Worlds Plus Blood, Guts and Zombies NEW EDITION Now Available from Simon and Schuster and Coscom Entertainment

The invasion begins . . . and the dead start to rise.

There’s panic in the streets of London as invaders from Mars wreak havoc on the living, slaying the populace with Heat-Rays and poisonous clouds of black smoke. Humanity struggles to survive against technology far beyond its own, meeting fear and death at every turn.

But that’s not the only struggle mankind must face. The dead are rising from their graves with an insatiable hunger for human flesh. Friends, neighbours and loved ones lost to the war of the worlds are now the enemy and the Earth is forever changed.

It’s kill or be killed, if you want to survive, otherwise you might become one of the walking dead yourself.

* The long-awaited sequel to A.P. Fuchs’s Blood of the Dead is unleashed! No longer are zombies the primary threat to Joe and his friends. Now, other forces have taken hold, and the stakes are raised if Joe and the others are to survive the undead world. As if that wasn’t enough, no longer are regular-sized zombies the only threat on earth. Some of them have grown to gigantic proportions and have an equally large thirst for blood and flesh. Be sure to check out Fuchs’s new supernatural undead thriller in, Possession of the Dead. The war is escalating.

* Andrew has what he calls “The Power of Resurrection,” and he wields it like a toy wand. In another part of the country, Lindy possesses a power that threatens both her health and her sanity. Year by year, each child becomes more aware of the other and the inevitable confrontation that is approaching, especially when the dead begin to walk. Who will honor the living, and who will Praise the Dead? Find out in this new novel by underground favorite, Gina Ranalli.

* The Magic Man can heal your broken heart and make your dreams come true . . . for a price. Who is he? Where did he come from? Why must your payment be in blood? A.P. Fuchs brings you over 15 chilling tales of nightmares, monsters, torture and mayhem in his new book, Magic Man Plus 15 Tales of Terror. Go here to read the collection 10 years in the making.

Tags Coscom War of the Worlds