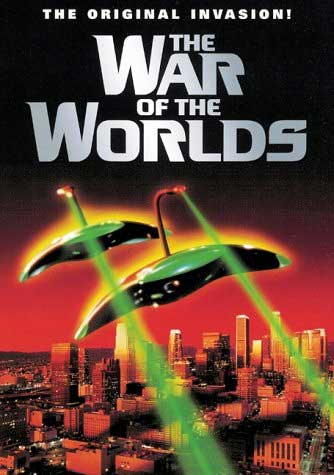 SYNOPSIS:
“It’s the Twentieth Century and Martians are appearing on Earth with destruction on their mind. While everyone panics, Doctor Clayton Forrester and Sylvia Van Buren join together in hiding out away from all the mayhem. The Martians unchain a direct assault to our planet, with hundreds of invulnerable ships. The invasion takes place all over the world, and all the major cities are destroyed one after one – even the atomic bomb can’t stop them. But, if the humans can’t beat them, who can?” (courtesy IMDB)

REVIEW:
Former Puppetoon producer George Pal began dipping his toe into big-screen science fiction with the stolid and occasionally accurate space opera opus Destination Moon (1950), which bravely foretold of privately-invested space travel (I think Richard Branson saw this one as a child and it scarred him for life). Later George frightened moviegoers with the gripping When World Collide (1951) which, for better or worse, inspired both Deep Impact (1998) and Armageddon (1998). But it was his extravagantly-staged update of Herbert George Wells classic tale The War Of The Worlds (1953) that really caught the public’s fancy, deservedly scoring an Academy Award for its special effects. George’s obvious love of the fantasy genre really shines through in every frame of this handsomely produced Martian invasion epic, gorgeously photographed in mouth-watering Technicolor by George Barnes.

The War Of The Worlds opens with a brief but spectacular tour of our solar system with Sir Cedric Hardwicke rabbiting on about why, of all the planets around, those nasty Martians felt the need to take over our luscious planet. Well, apparently Pluto’s too cold, Neptune lives in eternal night, Uranus…well, don’t even ask about Uranus! They’re coming here, okay? Craftily disguising their fabulous green and copper-coloured manta ray-shaped war machines as meteorites, the first arrives without warning one sultry summer night, crash-landing near a small Southern Californian town. Almost immediately the chuffed locals begin making plans to exploit the tourist attraction possibilities, despite the fact that whenever handsome scientist Clayton Forrester (Gene Barry) points his geiger counter at the smoking red rock it goes ape-sh*t.

Three men are put on watch overnight while the rest of the town enjoy a rave…I mean, hootenanny. Meanwhile the meteorite begins unscrewing its top and accompanied by a mechanical hissing sound, a metallic cobra-like device (with what looks like a tail-light from an old Studebaker) begins to noisily survey the area. As the three nervous guys approach, one naively suggests that perhaps waving a white flag might dispel any hostile intent. Of course, in Martian, a white flag translates to something like “Your mother wears army boots” and a Martian heat ray quickly reduces the unfortunates to smoldering piles of ash. Ouch! It’s a chilling first encounter, nicely handled by director Byron Haskin, who manages to pull-off the large scale mayhem with equal aplomb.

The War Of The Worlds was one of many films where director Byron Haskin teamed with producer George Pal. In his early career, he was a special effects artist, an asset when directing the killer ants film The Naked Jungle (1954) and the science fiction film Robinson Crusoe on Mars (1964). Byron also worked as a cinematographer and producer. His career in television included directing no less than six episodes of the original The Outer Limits including Architects Of Fear and Demon With A Glass Hand, and co-produced the original Star Trek pilot episode The Cage. But I digress.

When the might of the US military prove useless against the might of the Martians (even the Atomic Bomb proves to be about as effective as flinging a fish), Gene Barry and his potential ‘squeeze’ Ann Robinson flee the scene in a small plane, but are forced to take refuge in a farmhouse when Gene’s piloting skills prove to be somewhat limited. Unfortunately, a Martian with a similar lack of flying ability to Gene crashes into the house and gives the strangely unblinking heroine the chance to scream her lungs out when the Martian taps her on the shoulder with his three-fingered hand.

As the invasion continues and civilisation has all but fallen apart, scenes depicting Gene’s desperate search through the mostly deserted, rubble-strewn streets for Ann while looters clamour madly on board any vehicle that will get them out of Los Angeles are both impressive and surprisingly eerie. Only the cheesy finale disappoints – an ending which could almost be a deliberate joke on the devoutly atheist H.G. Wells. But even this sudden (and uncharacteristic) attack of Catholicism detracts little from this classic gem which stands proudly alongside The Day The Earth Stood Still (1951), Forbidden Planet (1956), and This Island Earth (1956) as the very best of fifties science fiction.

One last note before I wrap-up. I would have been slightly more impressed with Steven Spielberg’s film War Of The Worlds (2005) if it wasn’t called War Of The Worlds. The similarities between the 2005 film and the original H.G. Wells story can be counted on the fingers of one hand: Tripods, heat rays, mad preacher, and the hero’s journey to find his betrothed. There are certainly more differences than there are similarities, and – like Stephen King and The Lawnmower Man (1992) – my old friend Herbert George should have his name removed from the credits immediately. I’ve already sent him a letter suggesting this, but he hasn’t been terribly responsive the last fifty years or so. And it’s with that thought in mind that I’ll make my farewells, and please be sure to join me next week when I have the opportunity to tickle your fear-fancier with another feather plucked from that cinematic ugly duckling known as…Horror News! Toodles!