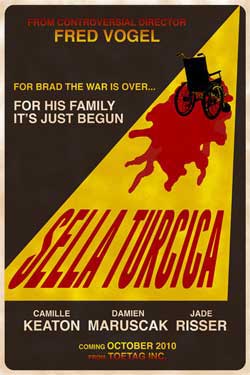 Sgt. Bradley Robak (Damien A. Maruscak) returns home from active duty after a mysterious accident leaves him paralyzed and wheelchair bound. Awaiting his return, his mother, Karmen (Camille Keaton) and younger sister, Ashley (Jade Risser) remain unaware of the details of the accident and severity of Brad’s condition. Once he arrives, though he looks sickly, his family members are so pleased to see him alive that they don’t bring attention to his ill appearance. Over the next twenty-six hours Brad’s condition terribly worsens, barreling down to a gruesome conclusion that will change the family forever.

The latest from the sick minds of the twisted creators at ToeTag Pictures comes a new thriller that might surprise a few fans with some pretty deep down home drama. Now, that’s not to say they don’t have a few surprises in store but we’ll get to that later. 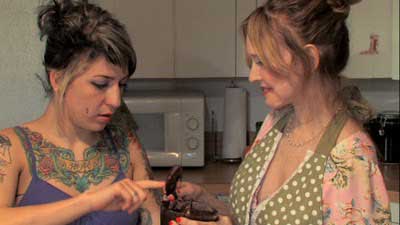 The new films features the veteran talents of Camille Keaton playing Karmen the mother of 3 older children who despite a few issues are a pretty close bunch. Sella Turcica centers around the returning war hero Sgt. Bradley Robak (Damien A. Maruscak) who is back home on medical leave after a pretty steady stint with the military. His return is not without problems, as he resurfaces in a wheelchair due to the loss of feeling in his legs. Though that isn’t the worst of it. He in fact is so pale and yellow skinned that you would otherwise assume a zombie of sorts. His medical condition is a bit of a mystery as he continues to grow worst thru the progression of the movie. Brad, is welcomed by a caring family who take every measure to support his return and personal care needed. His siblings include his beloved baby sister Ashley and his tattoo owner punk stylish brother Bruce. Though it doesn’t help matters a rather annoying black rap artist kid named Gavin is always poking his head around the families affairs including dating Brad’s  kid sister Ashley. From moment 1, it’s apparent that Gavin is better left to eventually being a victim than a reoccurring face in the Robak family. 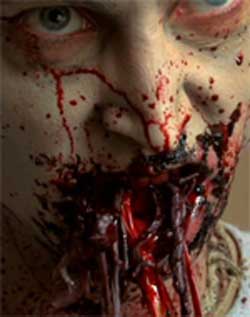 Brad is having his own issues. While he tries to deal with his return, his lack of leg use and his sister’s annoying boyfriend…he has bigger problems. His medical condition stems from a war incident that he has no recollection of. Though he begins to bleed black oily good from his ears with other parts of him slowly deteriorating.

A rash of severe headaches and some war stories that mostly go unfinished suggest that something more sinister and troubling is going on within that is eventually going to rear its ugly head.

Now, your first thought might be what is the title suggesting or mean anyway? I didn’t know myself, but that’s what wikipedia is for. Which is described as: “The sella turcica (literally Turkish saddle) is a saddle-shaped depression in the sphenoid bone at the base of the human skull.” Beyond that I’m not even sure the title really relates to the film, however there are some transforming elements within Brad that are brooding below. 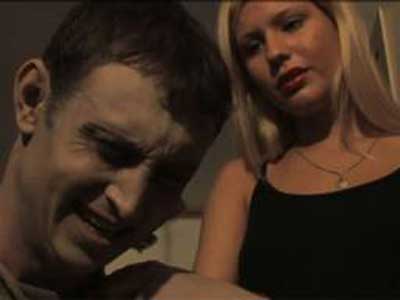 As far as Toetag films go, this smart -get under your skin horror film is perhaps one of the more mature releases from the bunch. Credits go to Don Moore, Fred Vogel and Shelby Vogel for an engaging script. There is alot of dialog and alot room for dramatic acting in this production, so hats off to director Fred Vogel for really creating a solid evolving piece of work. The usual crew is on hand of which the star performer FX wizard Jerami Cruise creates some great finale FX work that will surely satisfy the horror clans. Special mention also goes to composer Mike Hammer, who really suits the mood with some appropriately strong music undertones laying the dramatic tone needed for the film. 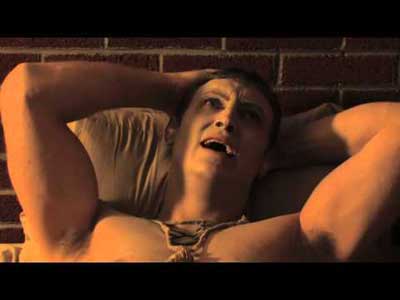 The movie itself revisits the idea of other filmmakers who take the paranoia of war and intentions to the next level of experimentation gone wrong. Even with the dramatic tones of Sella Turcica, it has a purpose that ends in bloody extreme violence. Which on the subject of, should really reward the acting performance of Damien A. Maruscak who plays Brad. Maruscak is able to chime in and out of reality with a talent that makes the film. When he finds a more literal transformation, his muscle control and movements would even make the cast of “The Ring” proud. Veteran Camille Keaton has proved she is an acting talent that has come a long way and will continue to prove iconic roles in films for years to come. The build up in FX work and acting transformation is quality stuff. All of this contributes to Sella Turcica as a must see film with powerful performances and a tasty horror presentation. ToeTag is definitely a horror force to be reckoned with.