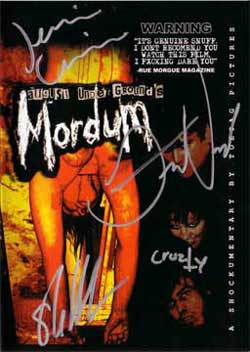 Two deranged friends bring along another guy to go on a random murder rampage. They kidnapped lesbian lovers, couples and they torture them in any way that the viewer can imagine. Your worst fears will come true in this shocking account of a killing spree.

Hell-o, once again sick-os and scalers of the underground Horror scene. This is Horror at its most shocking, uncensored, brutal, depraved, sickening and realistic as one can get. To avoid fainting, vomiting and heart failure… Not only will you repeat, “It’s only a movie… only a movie… only a movie…,”… You’ll beg, hope and pray for it to be. Rue Morgue Magazine (HIGHLY respected in my opinion) says, “It’s genuine snuff. I don’t recommend you watch this film, I f*cking dare you.” Not only do I agree with this statement, I would spread this wisdom for the entire August Underground series (a trilogy… so far…). This is not for the faint of heart, not for the easily offended and not for the close or weak minded. Some of the most jaded and hardened Horror fans out there will tell you, “this is some sick f*cking sh*t,” and that folks… is why I love it. 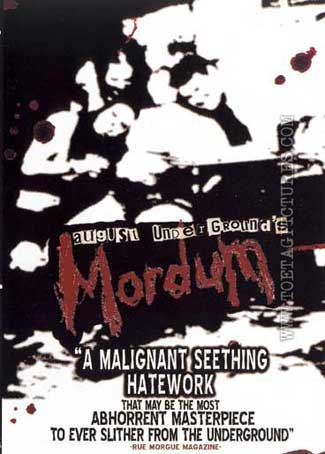 Although I do have to admit myself, people… As much as I love this film (my usual ritual since a child Horror fan is to watch my favorite films over and over), I can only view this one a few times. I’ll show it to virgin eyes and watch it when I’m in the mood for some all out brutality, but this goes far beyond any brutality as far as your everyday film goes. This is the one and only film trilogy that I can honestly say crosses the boundaries of decency and good taste… and vomits all over them in a rage of diabolical laughter. An envelope shredder (as apposed to “pusher”) and line destroyer. It’s absolutely safe to say that Fred Vogel and Toetag’s films are completely dangerous. View at your own risk and questionable stability. This has been a warning…

The film opens with three women making out. The three go from erotic tonguing to sadistically forced regurgitation. From there, we go into a scene of family relations that is quite disturbing to say the absolute least. Here is where Micheal “Maggot” Schneider (of the ever growing Maggot Films fame) is introduced. He, folks, is one sick puppy… or “Maggot.” Micheal’s character can be seen doing some of the sickest sh*t ever to be released to celluloid. Everything from gut sex (“You gotta f*ck her guts”) to basically (authorities, remember, only a movie, nothing is real) necrophilia child p*rn is taken on by Mr. Schneider. He vomits blood, has fecal play and gets his nose ring ripped straight out of the septum in a most brutal and painfully filmed sequence. 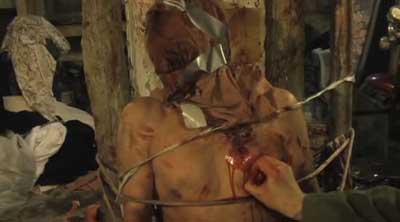 Our nameless killer (played by Fred Vogel, himself of Toetag Pictures and starring in Murder-Set-Pieces and The Redsin Tower) is joined by Christi Whiles (August Underground’s Penance, Brutal Massacre and Murder-Set-Pieces) and Killjoy (of the metal bands, Necrophagia, Eibon, Viking Crown, Ravenous and Red Stream Records. The three make one diabolical trio. Christi (“Crusty”) Whiles is sadistic and dominating in her roll as this female animal. She makes The Last House on the Left’s “Sadie,” look fragile and tame… Both original and re-make… Combined (That includes Chaos’ “Daisy” as well). Killjoy’s character is also a sick bastard, which has a play shed full of disembodied corpses and maggot infested victims, including his very own “garbage pail kid.” I am not talking about the bubble gum card collection. These common interests (murder and depravity) excites our nameless killer (Vogel) into wanting to hang out with Killjoy more often. Also including an appearance by Horror Underground magazine, Ultra Violent’s Editor, Art Ettinger.

When the (now infamously trade marked) white masks appear, you know things are about to get incredibly vile and on the twisted brink of unwatchable. The gore score in this second installment is a over the edge, thirteen plus. There are intestines, vomit, blood by the gallons, necrophilia, torture and crazy sex that will revolt most unseasoned viewers. Some scenes entailing a coffin and electrical tape involved are the darkest part of the depraved voyage into madness and the unimaginable. Many that have viewed any film of this trilogy can not stomach to watch the entire way through. What was originally supposed to be a demo reel for special effects became a cult classic Horror legend that has vomited forth two sequels. 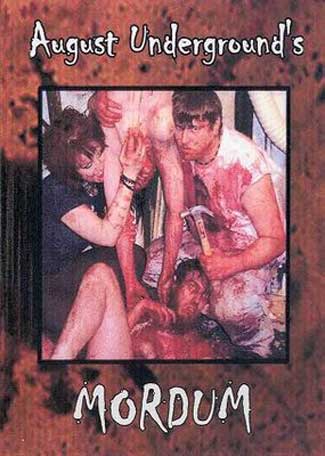 Speaking of special effects, they are superb for this kind of package. They are very convincing and realistically revolting. Jerami Cruise is a Make-Up/ Special Effects Artist virtuoso to be reckoned with. His mastery at the craft gets better and better in each of Toetag’s releases. They are sure to make any viewer cringe with a churning stomach and regurgitation clogged throat. The extras on the original DVD release (another Special Snuff Edition is also available) are trailers, stills music videos (by Poppa Pill and Killjoy’s Ravenous and inspired by the trilogy) and deleted scenes. A soundtrack is also available and a rare, alternate cut on VHS. I highly recommend this film for anyone who thinks they have seen it all… and prepare yourself. It’s one sick and vile f*cking voyeuristic ride into the depths of cinematic depravity. You have been abundantly warned… I give this film, August Underground’s Mordum, FOUR HORNS UP ( IN YOUR FACE, BEFORE YOUR EYES AND DOWN YOUR THROAT)… “Stay Sick” 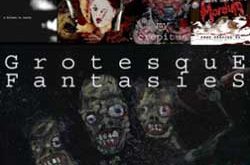