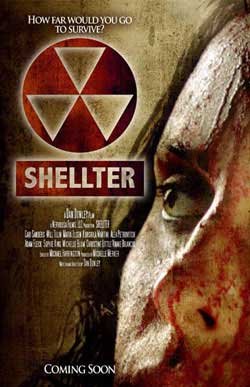 Wow, I just saw an amazing film…….and I didn’t even see it coming. It’s always a pleasure to say that, in this day and age of knock offs and redundancy. The film I’m speaking of is the latest film by director / writer Dan Donley about a small group located in a locked away shelter facility. The dynamic ranged William David Tulin plays the role of the facility doctor with an equally fine performance by Cari Sanders as Zoey. I found myself saying more than once….oh, ok, now I see what’s going on with an equally full resolve to back it up. With all that is being said, you might envision a highly involved epic of proportions. This is where “Shellter” deceives you.

A single set, a small range of characters and an isolated premise that the world has gone into Mad Max mode with a viral outbreak and a few lucky survivors who have to tough it out per way of local shelters. The laws of the land and scenery are kept in a single location as we explore the twisted world of the doctor and his rules within the facility. Zoey awakes as a survivor who learns from experience what’s going on and how to stay alive by playing by the rules. The problem is, the rules are radically askewed with the doctor taking liberties under his own perception of what has to be done. Zoey encounters an “at first” pleasant doctor and a wild enigmatic nurse (Maria Olsen) who offers their care during these apocalyptic times. Survivors are discovered and brought in during this run, each of which are subjected to a different experience and outcome within the basement walls of the shelter. It is with these new occupants brought in that the story reveals itself in furthered bits and pieces. Though they are not without some pretty nasty events to back them up that include murder, torture, rape and a few new ones that I’m not sure have names for them. Zoey holds her own while witnessing such atrocities and eventually being forced into them herself.

In a sense, Shellter’s visceral appeal is highly in line with the successful runaway hit “Inside”. Tulin who runs the show, seems to be able to change emotional states on the drop of a dime also introducing as many questions as answers. Another thing that is strange is that you feel like you’ve been down this road before when in retrospect you really haven’t. I would have expected such a premise flip to have arrived per big budget directors, though Donley seems to have the magic formula encased in a rather simplistic 1 set environment that works really well on its own. Surprisingly both main actors are new to the film scene, so we get to see a mighty range performed by new faces who I’m guessing will certainly go on to bigger productions. “Shellter” has so many surprises, that it would pain me to comment on all of them and give them away spoiling the fun. More easily you might imagine the scenario of what if the world had ended in the way we know it and you woke up in a facility told that life was going to be different from now on?

Shellter is simple a breath of fresh air that comes at you with multiple twists and turns constantly reinventing itself and horrifying you along the way. We simply get the full spectrum of gore, thriller, suspense and drama all wrapped in package that is a presented in a  highly original idea. I’m happy to say that Shellter is one of the most original horror films of 2010. If you get a chance this one should be on your to see list.