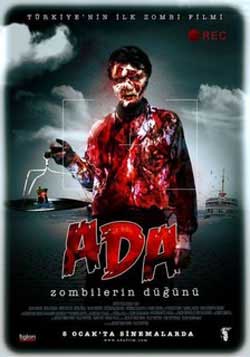 Erhan, together with five long time friends, is off to the island of Büyükada’ya to attend the wedding of a distant acquaintance. To commemorate the event, he can record their happy moments with a video camera he brought along on the trip. Viewed throughout the entire film, this camera captures the horrors that unfold in a most personal fashion. All seems normal at first, yet later the wedding guests become the victims of an unexpected zombie attack, and the whole scene turns into a horrifying lake of blood.

From the very get go ADA starts simply by showing a group of friends in a taxi on their way to a wedding. The group is discussing the traffic and about how they are supposed to meet up with other members of their party so that everything can get underway and the group can enjoy the wedding. Most of the first part of the film is basically allowing the viewer to meet the characters; the movie is presented as if it was filmed on a digital camcorder. The characters are Deniz, Ekin, Gamze and Erhan. Erhan holds the camera most of the first part and seems to enjoy capturing beautiful women on camera which is a good thing for him and the viewer since the film is quite full of several beautiful women.

The group makes their way to the dock and they meet up with several other characters including Omer. Omer is supposed to be the comedy release of the film; he is late and never has money and spends most of the first half of the film awkwardly hitting on a woman named Betul. It isn’t until the reception when the shaky camera work suddenly catches a zombie attack on camera. The zombies in ADA aren’t your usual run of the mill shamblers. These zombies are quick and already covered with blood, although the blood doesn’t look all that great on the camera. Needless to say when the zombies start to attack chaos occurs and the group is quickly separated from each other in an insanely captured stampede at the gate, this footage alone is worth a gander just for the sheer claustrophobic horror that would occur in such a situation.

The middle part of ADA involves the group attempting to find each other, Erhan ends up running into a woman he was filming earlier on and all of the regular things one might find in a zombie movie including but not limited to one of the main characters getting bit and someone recognizing one of the undead in their zombie state, the latter is actually an amusing segment since the recognized zombie is already attacking a member of the group while the member of the group who recognizes the shambler simply starts to cuss them out.

ADA doesn’t really bring anything new to the table in terms of zombie films or POV films, however there are several well placed jump sequences that appear throughout the film and the actual makeup on the zombie’s faces does seem to get better as the film goes on. There also isn’t a whole lot of gore for the gore hounds since most of the violence is suggested and shown off screen leaving the viewer to simply hear screams and see the reactions of all those who are around when the violence occurs.

There are several great sets throughout ADA as well not limited to a hotel and a small cemetery, the island where the wedding is held also becomes its own type of character creating a trap from which our main characters can’t quite get away from.

ADA is a smart little import that is sprinkled with hints of comedy and small bits of splatter but it just seems like there could have been more. The zombies are never quite explained and the whole thing has just been done better. Worth checking out by zombie lovers and fans of foreign horror, meddlers might want to just stick with films like REC which definitely captured the POV zombie holocaust in a much better fashion.