SYNOPSIS:
“The movie tells the story of rock singer ‘Pink’ who is sitting in his hotel room in Los Angeles, burnt out from the music business and only able to perform on stage with the help of drugs. Based on the 1979 double album The Wall by Pink Floyd, the film begins in Pink’s youth where he is crushed by the love of his mother. Several years later he is punished by the teachers in school because he is starting to write poems. Slowly he begins to build a wall around himself to be protected from the world outside. The film shows all this in massive and epic pictures until the very end where he tears down the wall and breaks free.” (courtesy IMDB)

REVIEW:
The eighties midnight movie cult hit The Wall (1982), also known as Pink Floyd’s The Wall, is Alan Parker‘s visual interpretation of the rock opera by the band Pink Floyd (Roger Waters, David Gilmour, Nick Mason and Richard Wright). The original album’s overriding themes are based on the causes and implications of self-imposed isolation, symbolised by the metaphorical wall of the title. The songs create an approximate storyline of events in the life of the protagonist, Pink. During his childhood, Pink’s father dies in the Second World War, is oppressed by his overprotective mother, and tormented at school by tyrannical, abusive teachers – each of these traumas become ‘another brick in the wall’.

The protagonist becomes a rock star whose relationships are marred by infidelity, drug use and violence. As his marriage crumbles, he finishes building his wall, completing his isolation from human contact. Hidden behind his wall, Pink’s crisis escalates, culminating in an hallucinatory on-stage performance where he believes that he is a fascist dictator performing at concerts that look like Neo-Nazi rallies, at which he sets his men on fans he considers unworthy. Tormented with guilt, he places himself on trial, his inner judge ordering him to ‘tear down the wall’ revealing Pink to the outside world.

Director Alan Parker already had a few cult-like hits on his hands with Bugsy Malone (1976), Midnight Express (1978) and Fame (1980), when he was introduced to Pink Floyd’s popular 1979 album by one of his children. Immediately recognising its visual potential as a motion picture, Alan quickly arranged a meeting with the band and talked Roger Waters into writing his first screenplay, which cuts abruptly between past (a lonely fatherless child abused by regimental school teachers), present (a rock star suffering a nervous breakdown), and future (the development of a fascist). 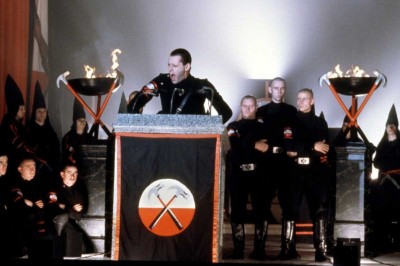 The movie is unrelentingly downbeat and at times quite gruesome (school children fall into a meat-grinder, Pink shaving off all his body hair), but it’s not completely unwatchable – which is more than I could say if someone like Ken Russell had directed it. The cinematography by Peter Bizou is extremely impressive, many individual scenes have undeniable power, and the animation sequences by British political cartoonist Gerald Scarfe are truly extraordinary. You’ve probably seen his distinctive work before, if not during the opening credits of the classic British television sitcom Yes Minister, then in the Disney animated musical Hercules (1997) for which he designed and supervised each and every character. 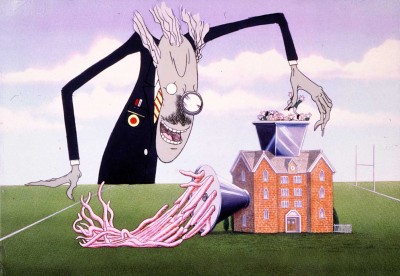 Arguably, the most controversial move in adapting the film was to cast independent singer-songwriter Bob Geldof (now Sir Bob) who, at the time, had absolutely no acting credits. In 1975 he became the lead singer of the band The Boomtown Rats, a rock group often associated with the Punk movement. They had their first number one single in 1978 with Rat Trap, and in 1979 the group gained international renown with their second number one, I Don’t Like Mondays. Geldof wrote it in the aftermath of schoolgirl Brenda Ann Spencer’s attempted massacre at an elementary school in San Diego. Soon after, The Boomtown Rats released the album Mondo Bongo and its single Up All Night was played on MTV with heavy rotation, which brought Bob to the attention of both Alan Parker and Roger Waters.

Despite his complete lack of acting experience, Bob gives a surprisingly accurate, powerful and thoroughly natural performance as Mr. Pinkerton aka Pink, his first and final major role in a motion picture ever. Unfortunately, due to Sir Bob’s domination of the screen, his excellent supporting cast barely gets a look-in. Nevertheless, keep an eye out (ow!) for Bob Hoskins, James Laurenson, Michael Ensign, Joanna Whalley (future Mrs. Kilmer), and little Nell Campbell, who played Columbia in The Rocky Horror Picture Show (1975).

In 1984, Bob famously responded to a BBC news report about the famine in Ethiopia by mobilising the pop music world to do something about the images he had seen, and co-wrote Do They Know It’s Christmas with Midge Ure of Ultravox in order to raise funds. The song was recorded by various artists under the name of Band Aid and the rest, as they say, is history. But there is a dark part of that history that not many people talk about: Sir Bob co-created the seminal reality television program Survivor, helping to bring about the downfall of quality commercial television in the western world – what a complete bastard!

And it’s with that rather terrifying thought in mind that I’ll ask you to please join me next week when I shall discuss another forgotten gem for Horror News. Until then, good night and remember, as my old friend Bela Lugosi would say, “Bevare! Bevare of the big green dragon that sits on your doorstep – and the gifts it leaves on your lawn.” Toodles! 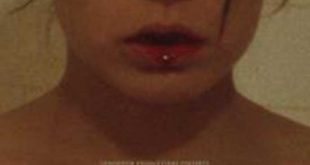 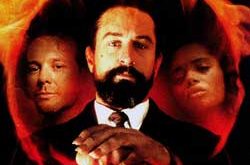