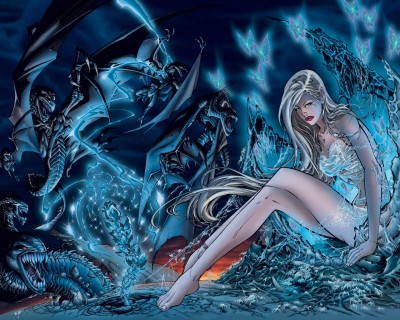 While John Carpenter saw most of his success in the seventies and eighties he still has not quit. Personally I say good for him. He has seen so many of his classic films remade already such as Halloween, Assault on Preceinct 13, and The Fog. His latest work is titled Darkchylde based on the graphic novel by Randy Queen. Richard Taylor will be doing the special effects on this film as well who is known for his work on the LOTR films as well as 30 days of night. Sounds like it could be a really cool matchup. Here is what the one sheet has to say about the film.

Master of Horror set to bring you the girl of your dreams. John Carpenter is onboard to direct Darkchylde, based on the comic by Randy Queen about a good hearted southern teen cursed to become the creatures from her many recurring nightmares. Every time Ariel Chylde transforms, she sheds her skin and a new nightmare emerges from her Id to act out her deepest, darkest impulses.

John Carpenter says, “Randy Queen’s hijacked angel, Ariel Chylde, is the best young female character since Laurie Strode in Halloween. Bringing Ariel and her dark mysteries to life should be quite an adventure for us all.”

Adds Queen, “I’m beyond thrilled that John Carpenter, one of our most important, and legendary genre directors, and the man responsible for such landmark films as THE THING, and HALLOWEEN has come onboard with Weta Workshop to help bring the nightmarish tale of Ariel Chylde to the silver screen. As a horror fan, the thought of Carpenter and Weta together, beautiful dreamscapes, and multiple transformations, makes me incredibly excited. There is a reason nearly his entire catalogue has, or is being remade, and it’s because Carpenter is a genius.”

Offering a stark contrast to super hero comics, Darkchylde was a breakout sensation of the late 90’s and early 2000’s, garnering immediate acclaim, and an unusually large female fanbase. The property went on to outsell Spider-Man, Superman, and Batman in both domestic and foreign audiences, and has been realized in toys, trading cards, apparel, lunch boxes, mini busts, and more recently a hit crossover with Top Cow, and a statue from PopCultureShockToys. Fans can now read the Ariel Chylde saga online via Wowio and Darkchylde.com and a trade paperback collecting the “Legacy” and “Redemption” series of books ships in January from Image Comics.

John Carpenter is an acclaimed director, screenwriter, producer, and composer, who won an academy award for his short film while still just a student at USC. His storied career includes such seminal films as Halloween, The Thing, Escape from New York, Starman, Christine, In the Mouth of Madness, Assault on Precinct 13, They Live, and The Fog. His most recent outing, The Ward, starring Amber Heard as an institutionalized woman tormented by a sinister spirit, premiered at the Toronto International Film Festival in September.