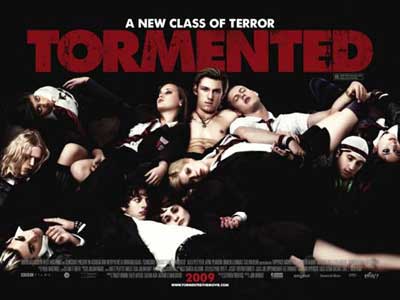 A bullied teenager commits suicide only to find out that the only real way to get out of high school is to graduate. He comes back from the dead only to exact revenge upon all of the kids who tormented him while he was alive, and what better way to get revenge than to kill all of them and then pin it all on the girl who would never give him the time of day.

“A new class of terror!”

Jon Wrights Tormented is a slasher film of the British variety. It is very similar to the eighties film Slaughter High except for the fact Jon Wright embraces British culture, instead of trying to make an American film. Tormented is a horror/comedy and in a lot of ways it does to the slasher film what Shaun of the Dead did to zombie movies years prior, fans of Shaun will enjoy the film for its humor and its use of gory FX to tell its story.

The whole film starts by showing the head girl at a private school Justine being led out of the school by the police. Justine looks like she has been through a lot and soon we are awarded with a “five days earlier” stamp letting the viewer know that the events they just saw were in fact the end of the film. The credit sequence at the beginning of the film was also well put together with graffiti written on desk tops letting us know the cast and crew responsible for the film.

When the film begins to roll again we are obviously at a funeral and Justine is speaking to everyone there. A young man named Darren Mullet (nicknamed Shrek for his appearance) has committed suicide and everyone appears to be saddened by the whole ordeal. Jason, a kid with no chance at high school jumps up and immediately begins to call Justine a hypocrite since she didn’t even know Darren and in fact people like her are the reason that Darren committed suicide in the first place. Jason is removed from the funeral by an overly aggressive PE teacher and things go back to where they started.

Outside of the funeral Alexis and his group of friends are talking about the party they are going to have that night, Alexis informs his group of pals that he is going to ask Justine to be his date. Justine is with her friends discussing what movie they are going to watch that night when Alexis makes his approach. The goth/emo kids watching from the sidelines with their commentary let you know what kind of group Alexis and his friends are, in between one of them wishing he was dead himself of course.

Justine eventually shows up at the party and the DJ calls her out and starts rapping about her when he sees her, this is kind of amusing to watch a white British youth rapping! The DJ of course offends Justine who turns to leave only to be chased down by Alexis and brought back, the DJ is kicked out of the party, after being thrown in a pool.
As the party gets going Alexis tries to take Justine to a private spot of the house, decorated with various pictures of naked women! Just as the two of them start to get pretty heated one of Alexis’s friends storms into the room with a chainsaw and a clown mask on to scare them; of course the other friends are filming this to put it on the web. This group of mean kids has also started to receive text messages from Darren, only they don’t assume its Darren. The text messages themselves are simply smiley faces that repeat things over and over again such as “you are a fashion whore”.
When one of the girls in the group suggest that they do a shot as a final send off to Darren Justine gets sad and admits to the group that she doesn’t even remember what the poor boy looked like. The DJ from the party however has his own way of sending Darren off and that is by pissing on his grave. Someone however doesn’t like this and just as the boy finishes a wooden cemetery cross is shoved through the boy from behind.

The group of mean kids begins to interrogate all of the other kids at the school trying to find out who exactly is behind sending them the texts. As the film goes on they are also picked off one at a time in bloody fashion. The first time we actually get to see Darren his is drowning one of the girls in the schools swimming pool by sitting on her underwater! As Darren makes his way through all of his former class mates Alexis and Justine work on their relationship, but you know you really should learn everything you can about the person you are going to date otherwise things can come back and bite you in the ass. Poor Justine finds out just in time for a great show down only to be blamed for everything herself.

Tormented is a slasher film, but it is also a very fun movie to watch. The characters are amusing to watch; one particular emo kid is deafened when Darren straps him down to a chair and turns the music up as loud as it can go. The deaths in the film are also amusing to watch there is a wedgie that ends in impalement on the fence around the school, there is the impalement from behind and the drowning I mentioned above. A young girl has her hands cut off by one of those old fashion paper cutters and even Jason, the guy who defended Darren is killed by impalement via pencils through the nostrils. The best death scene though is a couple caught by Darren in the heat of the moment. When the police arrive at the scene one of the women walk up to the head detective with a condom and informs the detective that the condom is full. The detective makes a joke about how the kid at least got his rocks off before he died and the woman informs him that the kid’s penis is still inside the condom, all in good fun. Jon Wright really lets the red stuff fly during these death scenes so the fans of the gore will be more than happy with this outing.

When Darren isn’t killing the group who tormented him he is turning the tables on them. He rearranges refrigerator magnets to spell out hurtful messages. He also changes a banner in the school to say that one of his class mates prefers to take a back door entrance among other things.

Jon Wrights Tormented is a great throw back to the slasher films of the early 1980’s, but with a modern twist utilizing cell phones and websites in a clever fashion that mirrors how children are treated at high school. Fans of the slasher genre don’t want to miss out on adding this one to their collection, and fans of a little comedy added to their horror should search it out as well. 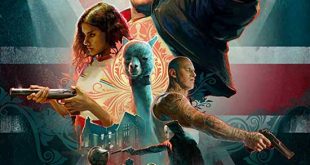 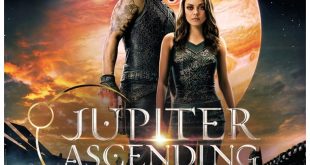 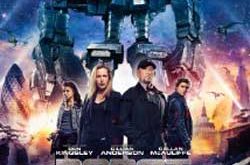