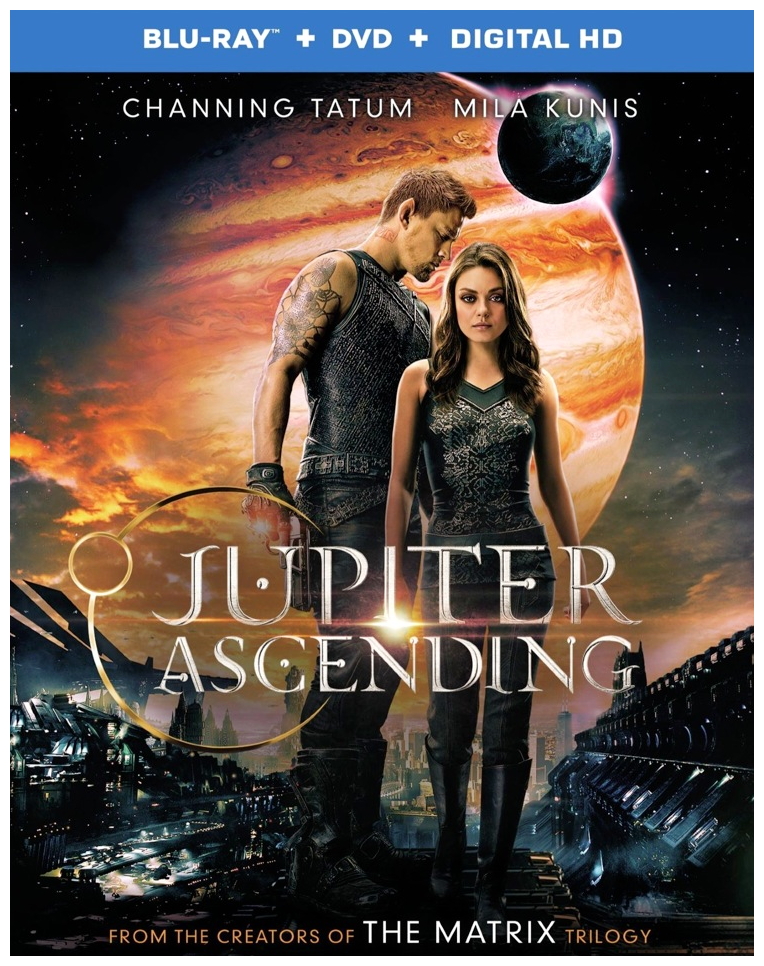 “Earth’s residents are unaware that the human species on Earth and countless other planets were established by families of alien royalty for the purpose of harvesting the resulting organisms to produce a type of youth serum for the elites on other planets. After the death of the matriarch of the House of Abrasax, the most powerful of the alien dynasties, her three children Balem, Kalique and Titus are fighting over the primary heir. Jupiter Jones, an unlucky caretaker of other people’s houses, is identified as the genetic match of the murdered alien matriarch who used to rule Earth. Genetically engineered ex-military hunter Caine Wise shows up to protect her from alien assassins and take her to outer space, where the heirs of the Abrasax Dynasty are plotting against her.” (courtesy IMDB)

Larry Wachowski and Andrew Wachowski were brothers who both grew up to become trans-women. Lana Wachowski and Lilly Wachowski became the dynamic duo of action filmmakers collectively known simply as the Wachowskis, who made their directorial debut with Bound (1996) and achieved fame with their second film The Matrix (1999), a runaway success winning much acclaim and many awards. They wrote and directed the two sequels – The Matrix Reloaded (2003) and The Matrix Revolutions (2003) – and were deeply involved in the writing and production of other works in the franchise, not only video games, books and comics, but also the excellent animated anthology film The Animatrix (2003), a personal favourite of mine. The Animatrix is a collection of eight separate short stories, told by different animators in different styles set in the world of The Matrix, including a thorough history of how our world came to look as it does in the film. 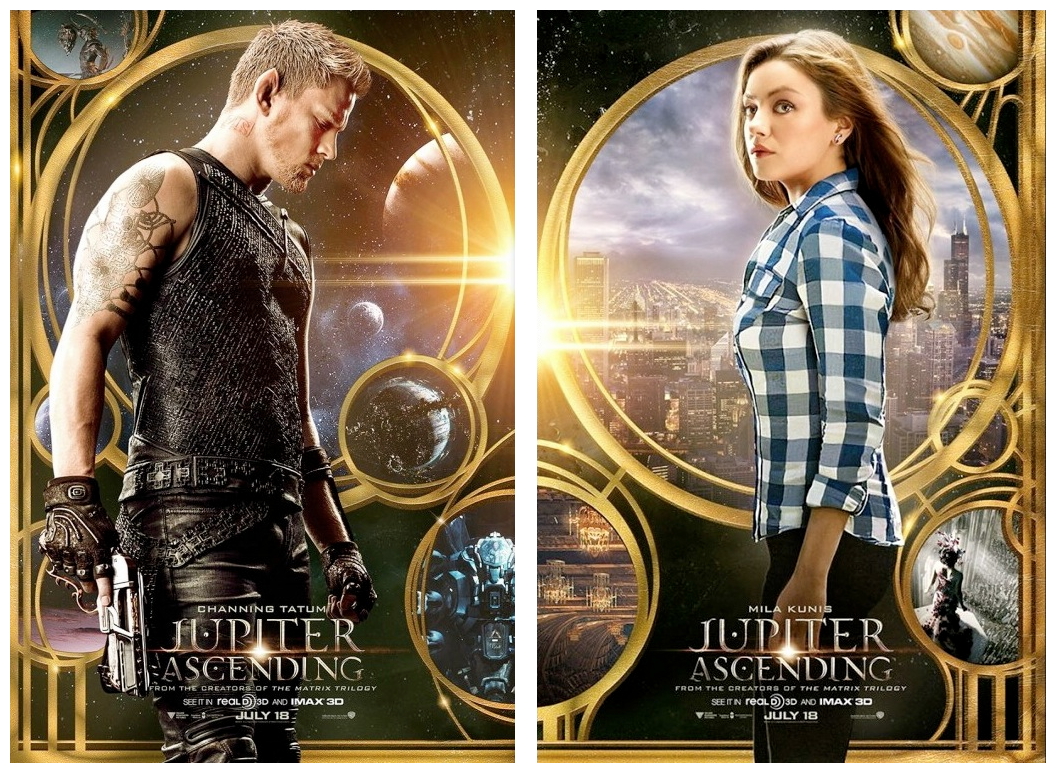 When I was introduced to the vivid world-building savvy that is the Wachowskis in The Matrix, I was pretty much knocked out. The duo had created a world so rich in its own logic and mythology that it was hard to believe it wasn’t directly adapted from a system already existing in comics or other literature. Even though its themes could be traced back to cyberpunk and other science fiction, it was both intriguing and visually astounding. The Wachowskis continued to amaze after The Matrix trilogy with other action-thrillers with strong sociology and post-apocalyptic themes, such as V For Vendetta (2005) and Cloud Atlas (2012). Considered a low point in their career, Speed Racer (2008) may be dismissed as self-indulgent stylised eye-candy but, boy, it still looks great! In 2013 the siblings tore into another science fiction epic of their own creation, Jupiter Ascending (2015), in which a humble cleaning lady discovers that she embodies a genetic anomaly which could see her save her planet and become ruler of the entire universe.

Lana Wachowski: “After our decade-long sojourn through The Matrix trilogy, I read The Odyssey over Thanksgiving at my parents’ house, then we watched The Wizard Of Oz (1939) and I was struck by the similarities of these two stories, especially in their concept of ‘home’ – home is a centre of gravity and one of the ways we understand ourselves. Coming home makes us think about the ways we’ve changed and the ways we’ve stayed the same. That was the lightbulb moment when Andy (this was before Andrew became Lilly) and I first started thinking about Jupiter Jones as a woman who is unhappy, who feels trapped by the drudgery of her life, and who goes off into space and learns things about herself, like so many people who are unhappy with their lives and who go on journeys in search of what they want or need, only to return with a new perspective and appreciation for where they came from.” 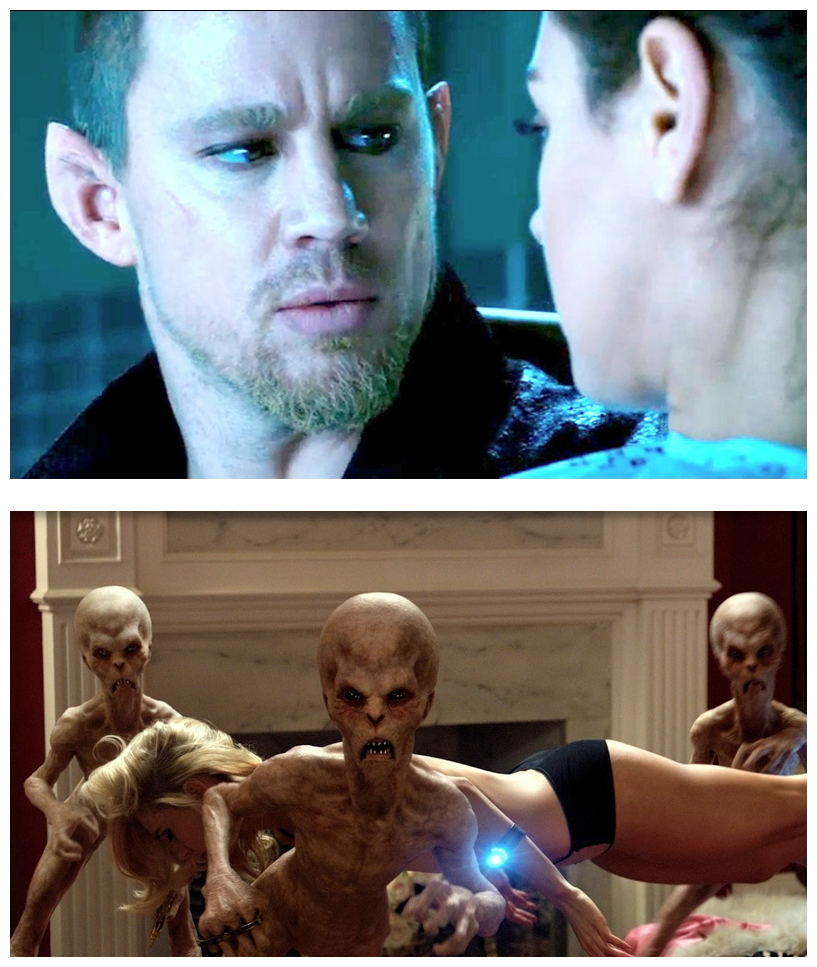 You certainly can’t accuse the Wachowskis of making boring movies, and Jupiter Ascending is no exception, although the weight of its delights come visually rather than narratively. Mila Kunis (replacing Natalie Portman who had to drop out at the last minute) leads the story as a young woman named Jupiter, who assumes that slopping water in and out of buckets is all that life is ever going to offer her, a fate which crushes her spirit and dreams of the stars. Meanwhile, all manner of exciting stuff is going on somewhere just out of our sight, as is the way with the Wachowskis – in The Matrix it was a parallel reality and, in this gorgeous space opera, it comes from the heavens. As luck would have it, Jupiter happens to be the genetic match for a powerful intergalactic queen who has just passed away, leaving her children – Balem (Eddie Redmayne), Kalique (Tuppence Middleton), Titus (Douglas Booth) – to squabble over how the universe should be ruled. It’s quickly discovered that Jupiter holds a claim to this power, and an ex-military man-wolf hybrid named Caine Wise (Channing Tatum) has been sent to Earth to escort her to her fate. 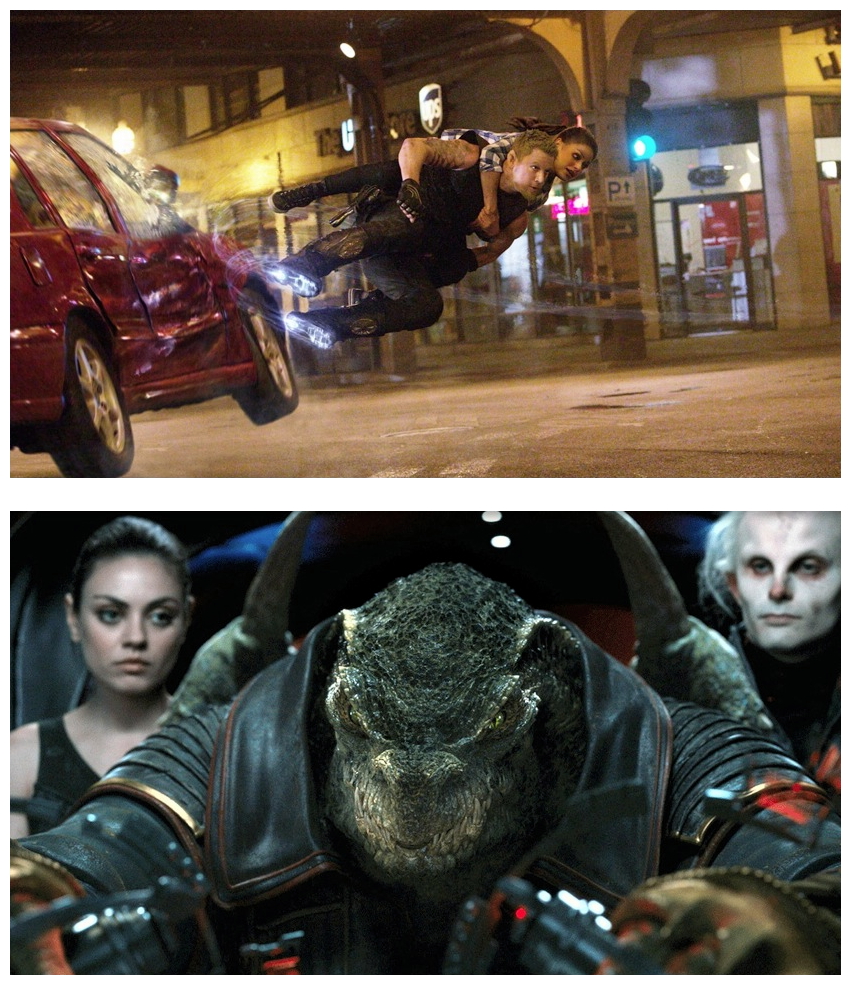 While Caine and Jupiter ascend to a ship, it is destroyed by a squad of Keepers who then attack them. Caine fends off the attack and manages to kill the Keepers and hijack one of their vehicles while protecting Jupiter. Caine realises that Jupiter must be of great significance to both Titus and Balem, who sent the Keepers to Earth to capture her. He takes Jupiter to the hideout of Stinger Apini (Sean Bean), another former soldier living in exile on Earth to become a simple beekeeper (a reference to the retirement of Sherlock Holmes). As Jupiter discovers that she can control the bees in Stinger’s residence, she is revealed to be of galactic royalty. Stinger agrees to help Jupiter, but a group of hunters capture her and take her to Kalique’s palace on a distant planet, where he explains that Jupiter is genetically identical to the dead queen, and therefore the Earth’s rightful owner. With the help of intergalactic space-cop Captain Diomika Tsing (Nikki Amuka-Bird), Caine retrieves Jupiter and takes her to the planet Ores to claim her inheritance. 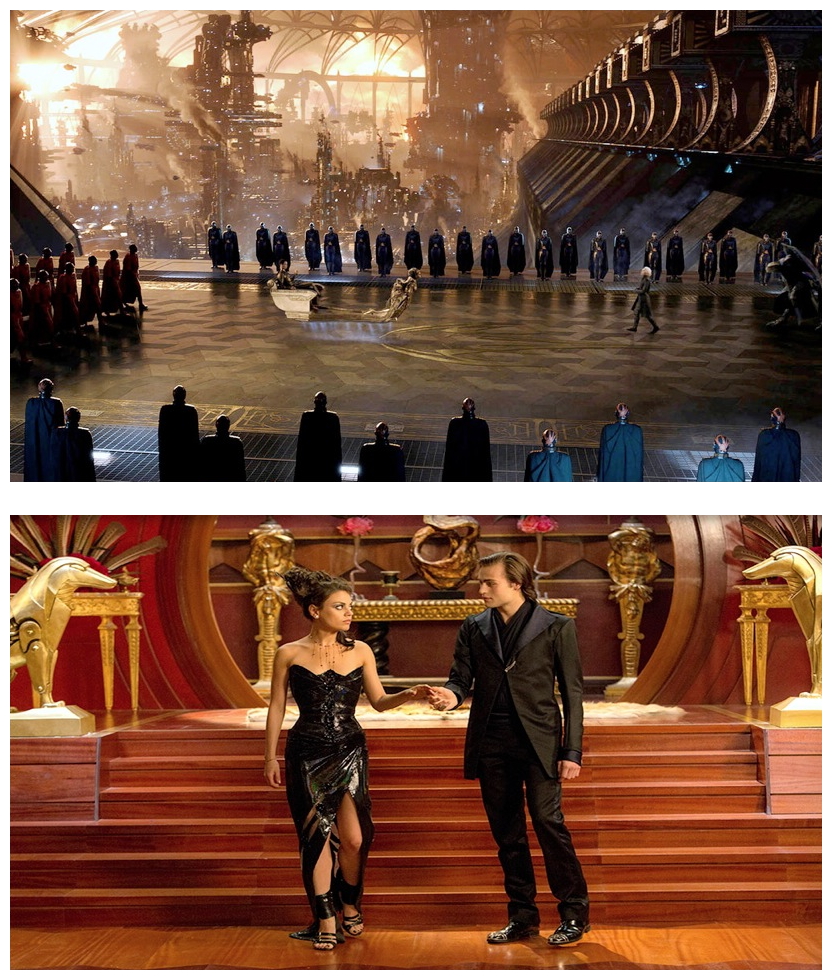 Jupiter Ascending is one of the most beautiful movies I’ve ever seen, and the visual effects are top notch. Everything from explosions and action sequences, to spaceships and settings, this movie has all the eye candy one could want. Fight choreography is executed perfectly and each scene thrilling in its own way. Each planet or world is stunning and precisely crafted. Michael Giacchino‘s music fits each scene very nicely, whether it’s a fast-paced chase or a quiet thoughtful scene, and has a mysterious and almost hollow beauty to it which fits perfectly. Alas, not everything in Jupiter Ascending is as good as the effects or the music. Leads Channing Tatum and Mila Kunis give good performances for the most part but, overall, could have been stepped up a notch. Admittedly it’s difficult to portray realism in the midst of a space opera, but I can’t help but feel they’re ‘phoning it in’ at times. Tatum plays the canine-human hybrid tasked with collecting Jupiter from her Earth home and delivering her to the corrupt alien family whose rule she has the power to usurp: 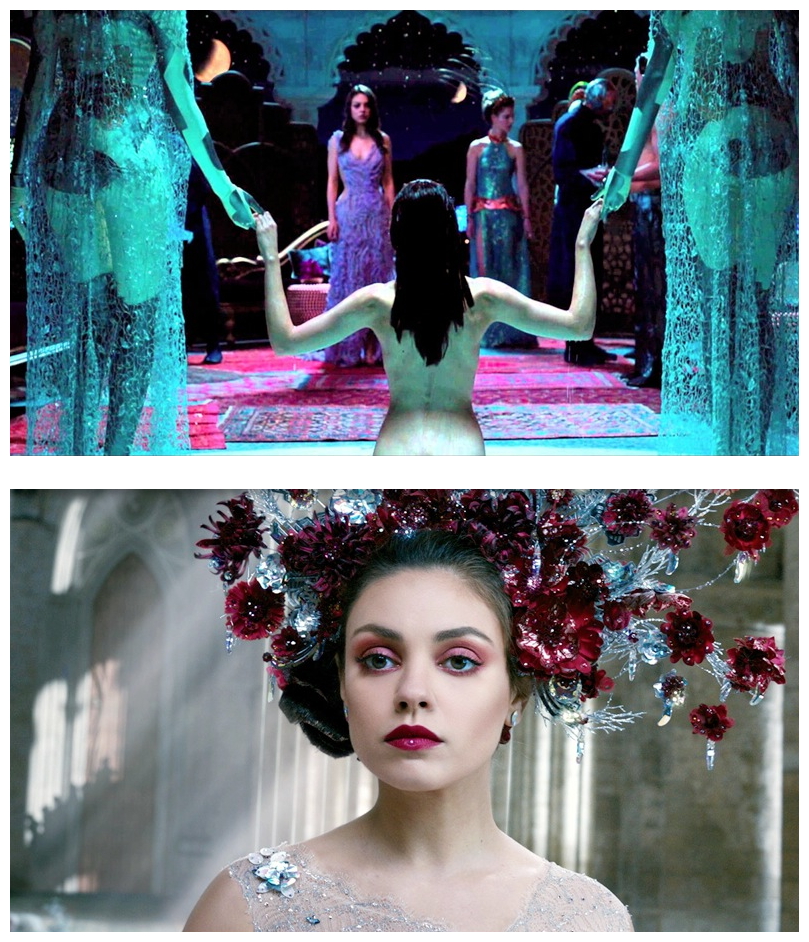 “Lana and Andy created a world that will open your mind to the possibility that we are just a very small grain of sand on an enormous beach.” Caine becomes Jupiter’s guardian, champion and lover over the course of the film. Lana Wachowski: “When we first started talking about Jupiter, we thought a lot about Dorothy from Oz. I love that she had Toto as her protector. Jupiter needs a protector. Also, I was reading a book about wolves and it explains that wolves hunt in packs, and that the wolves that get exiled from that pack almost always die. To survive, they must become super-hunters. For Caine, he’s hunting for that thing he never had, a pack of his own, that sense of belonging you feel when you love and are loved back. For Jupiter, Caine’s love is the key to her overcoming her distrust of the world and herself, which gives her courage to stand and fight for what’s important.” 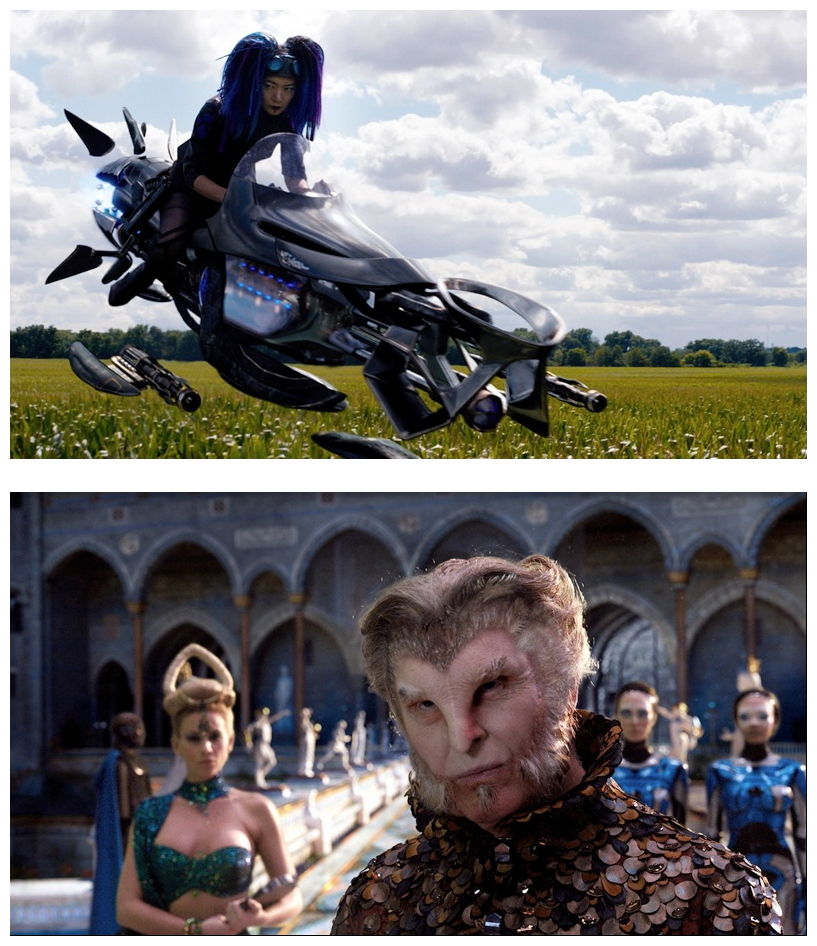 Mila Kunis found parallels between her own life’s journey and her character. “Like a lot of us, Jupiter is one of those people who doesn’t know if she’s worth more or can achieve more, or even if there’s any more to life than what she’s been dealt. She’s been kind of sleepwalking her way through it until someone or something comes along to shake her up. I think many people can relate to that moment in their lives. I certainly can. Sometimes you don’t know which path to take or even what road you’re on until something happens to make you realise there’s more to life than this.” European architecture was a major influence in production design, including Renaissance architecture, modern glass and Gothic art. The beautiful interior of the Natural History Museum in London was used for the palace sequences and required 550 cast and crew. Shooting was completed in 2013 and the film was slated for release in July 2014, but was pushed back to 2015 due to a post-production period lasting more than a year. 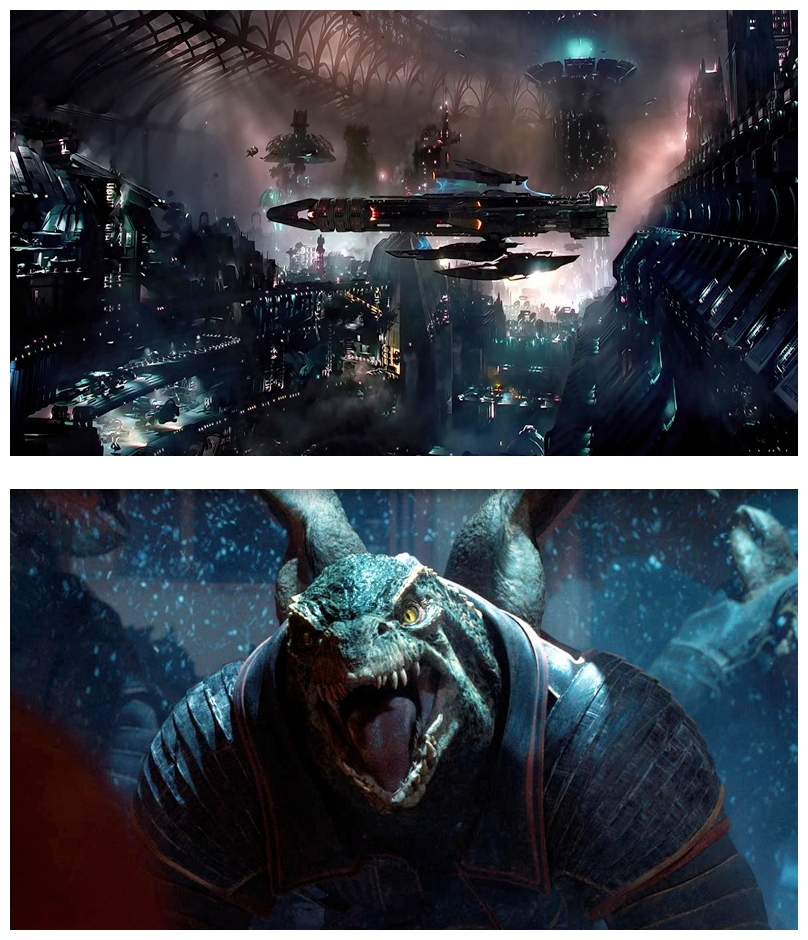 Unfortunately, story and dialogue is where Jupiter Ascending is at its weakest. It has so much ambition and intricacy (the shooting script was 600 pages) that it might be too much to fit into two hours. The duration is fine, but the plot just wants to keep on going and loose ends are left fraying. Some things are not really explained to the fullest and, while one can figure out the general idea, it’s difficult to get deeply into it. Don’t believe me? Just look at what some critics said:

Rotten Tomatoes: “Pleasing to the eye but narratively befuddled, Jupiter Ascending delivers another visually thrilling misfire from the Wachowskis.” 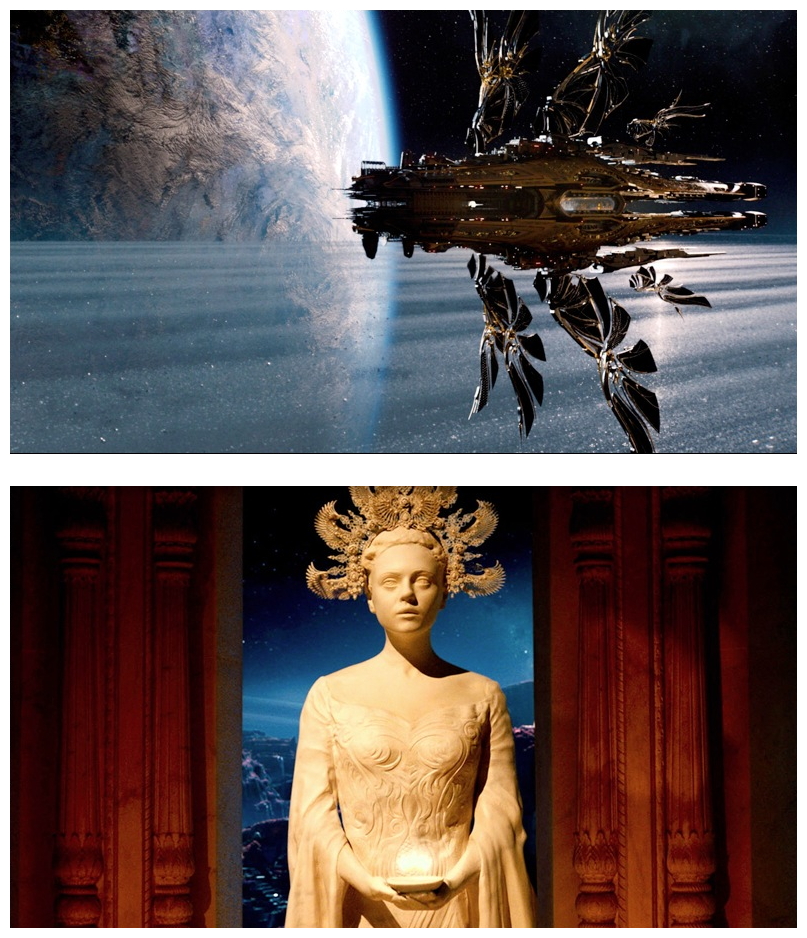 Gavia Baker-Whitelaw: “Catnip for a certain subset of geeky self-aware young women. Dumb and weird and beautiful, and it wants you to be happy.”

Mark Kermode: “Jupiter Ascending is a lot of things. Bonkers, all over the place, incoherent, preposterous, ridiculous dialogue that George Lucas would have thrown in the bin, spectacularly overripe performances. I’m not going to say it’s good, but I would be lying if I said I didn’t enjoy it. I had fun.”

I think it’s fun too, but don’t expect anything more than a spectacular-looking sci-fi mashup of Cinderella, Snow White and The Wizard Of Oz. Great potential is lost, but credit should be given for at least being relatively original and not a sequel, reboot or based on a graphic novel or book. Originality is a great thing and the Wachowskis are pretty darn good at it. It’s on this high note I’ll bid you a good night and farewell until we meet again to grope blindly around the bear-trap known as Hollywood for next week’s star-spangled celluloid stinker for…Horror News! Toodles!