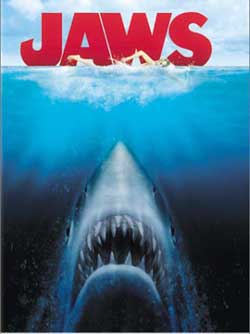 The people of the small island town of Amity are being attacked by a giant Great White shark during their busy summer season when tourists flood the town. Three men (The Police Chief, a Marine Biologist & a grizzled fisherman) set out to hunt it down & kill it before it can claim any more victims in it’s razor sharp teeth.

You know faithful acolytes, there are only a few things that actually make The Black Saint nervous. I’m not a fan of dolls, probably thanks to The Twilight Zone & that f*cking “Talky Tina” episode. I’m not a big fan of films dealing with exorcism, this due to the (still raw & bleeding) scars “The Exorcist” left on me in 1973, curse Linda Blair & her spinning head! And lastly, I’m not a big fan of water in which I can’t see what’s underneath it. When I say that I mean I like to see the sand my feet are standing on when I go in the water at the beach. I don’t like murky water where your feet disappear as soon as you step in it. And for this I would like to thank Steven Spielberg, Peter Benchley & a f*cking malfunctioning robotic shark by the name of Bruce.

Released in the summer of 1975, “Jaws” essayed the tale of the seaside town of Amity and the idyllic life it’s residents enjoyed. The police chief doesn’t have too much to do but corral teenagers here and there and sit on the beach to get a monstrously awesome tan and best of all the Fourth Of July celebration is arriving & that means tourists coming to enjoy the beach & spend lots of money. All is good in Amity, that is until a young lass goes skinny dipping in the water late one evening only to be grabbed & mercilessly thrashed through the water until she is pulled under & a red cloud of blood rises to the water’s surface. This scene is the first scene in the film & it sets the tone for the rest of “Jaws” immediately.

Everybody who went to see this movie knew it was about a killer shark but I don’t think anybody expected the absolutely perfect combination of Benchley’s script (based on his novel), John Williams’ perfect score to the film which became ingrained into the brains of the entire population. Even if you didn’t see “Jaws” you knew what the soundtrack sounded like & Spielberg’s perfect sense of timing & slowly ratcheting up the tension in the film (we don’t even really see the shark for the first 80-85 minutes of the movie)! What’s this you say? A movie about a killer shark in which we don’t see the shark till nearly the end of the movie? Well, “Jaws” is about 2 hours long so there’s plenty of quality time with the shark to be had after we get our first real glimpse of him & Roy Scheider utters the unforgettable (& often spoofed) line: “You’re gonna need a bigger boat”.

“Jaws” was pretty much the first real “Summer Event” film. Basically it was an expensive experiment in which all of the chemicals just happened to blend just right despite all of the trouble they had making the movie. In fact, it’s because the mechanical shark that was used malfunctioned so often that we don’t see too much of it at the outset. This of course just made the film more suspenseful & ultimately terrifying. A lot of you don’t remember but there was a time when movies didn’t open in 3,000 + theaters their opening weekend. “Jaws” opened in just over 400 theaters nationwide. And with a director that had only one theatrical release under his belt at the time (The Sugarland Express) & a (then unheard of) $8,000,000 dollar budget due mostly to cost overruns involving the malfunctioning shark, “Jaws” was an experiment. Would more people go to see this movie if it opened in more theaters? Would they wait in line for over 2 hours to see the next show? Remember, there were no multiplexes back then. Your local bijou would usually play just one film, so if it was popular you had to wait outside in line for the film to end & the theater to be spruced up a bit before you could get in to see it. Universal Studios was taking an enormous gamble opening this movie in the summer when people are on vacation, not going to the movies.

But “Jaws” was unlike any movie made before it & I think it’s fair to say that it still hasn’t been eclipsed since it’s original release in it’s combination of suspense, terror & tension. I watched it last night & still got nervous once the music started playing….In addition, the filmmakers were lucky that although their mechanical star was very tempramental, their human ones weren’t. The combination of Roy Scheider as Police Chief Martin Brody, Richard Dreyfuss as Marine Biologist Matt Hooper & especially Robert Shaw as fisherman Sam Quint is one that has yet to be eclipsed to this day in this type of film. All of them deserved Oscars yet none of them were even nominated. Neither was Spielberg or Benchley although it was nominated for Best Picture & John Williams did win the Oscar for Best Score among a few other technical awards. The lack of nominations was a travesty in and of itself.

And the fact that the Academy could ignore Shaw’s performance let alone those of Scheider & Dreyfuss is one that really burned me as I watched the film last night. All of them are uniformly excellent but Shaw’s performance is one for the ages. His story on the events that took place on the U.S.S. Indianapolis is recited with such a mesmerizing energy coming forth from him that it still gave me a bit of the old “Goose Bumps”! All of the actors have their signature scenes but Shaw’s are the most thrilling. All of the actors in the film are markedly believable & this is because a perfect synergy was created between the filmmakers & the cast. I believe Spielberg convinced the cast that although the shoot was way over budget & the studio was nervous & the f*cking shark rarely worked that they were in the middle of something bigger than the sum of it’s parts. They just had to trust him to see it through.

And as to the shark (nicknamed “Bruce” while filming), Spielberg has gone on record saying that some of the shots of the shark in the film were while it was malfunctioning & he kept them in the film anyway. Bruce usually sank underneath the surface of the water a few minutes after he was put into it. He wasn’t designed for buoyancy. Since they had to retrofit a new Bruce that worked half of the time if at all Spielberg had more time to make the film so full of suspense without seeing the actual shark that when that f*cker makes his first appearance it is genuinely startling to the audience. Bruce the shark is one of the most effective & terrifying creatures in film history & he was broken half of the time! What does that tell you about the effectiveness of the film?

Everybody who’s reading this has seen “Jaws”. I can’t think that you haven’t but just in case…SPOILER ALERT AHEAD!! Shaw’s death scene in the film is both horrifying & sad. I don’t think anyone expected the toughest guy on the boat to die & in such a ghastly, bloody manner as well was a sight to see. Fuck it still is. But if you look closely it looks like the shark isn’t really working right in this scene either. Actually it looks like Bruce is trying to sink & they propped him up on the boat to keep him afloat while Ryan slowly slides into his gaping maw. And the BLOOD….Oh the marvelous bloodletting in this scene! I remember the entire audience screaming in horror when I first saw it. As a matter of fact the audience was screaming & jumping through most of the movie. And soon after it opened, “Jaws Mania” swept the country. People were lined up for blocks to see it, happily waiting 4-6 hours in some cases for their chance to get the sh*t scared out of them. Some would say “The Exorcist” or “The Godfather” got there first but they didn’t open in 400 + theaters. They slowly built their audiences over time. “Jaws” was heavily promoted before it’s debut & when on it’s opening weekend it made just over $7,000,000 during that weekend. Mind you tickets cost $2.50 back then so that’s a lot of people waiting in line & it just got bigger & bigger all summer long.

Of course it’s success led to the inevitable sequels. “Jaws 2” was an acceptable if far fetched sequel. “Jaws 3D” was nearly unwatchable without being in 3D, they just threw in the headache you got watching it with those pitiful glasses hoping you wouldn’t realize how bad it was. But even that was better than the execrable “Jaws: The Revenge”. Remember the tagline? “This time it’s personal”….This is the one where the shark jumps out of the water & grabs a helicopter in midflight. Yeah, that’s believable all right.

“Jaws” was also responsible for a literal flood of “Nature gone mad” films, most of them Italian. “Killer Shark”, “Tintorera”, Joe Dante’s “Pirahna”, “Grizzly” (billed as “Jaws with claws”), “Barracuda”, “Tentacles”, there was even an Italian ripoff called “Great White” that so closely aped “Jaws” that Universal threatened to sue & it never got a proper release in the U.S. Apparently the ocean was no place for people to be in during the 70’s & Hollywood was milking it for all it was worth.

But no film has ever matched “Jaws” for sheer horrific intensity & probably never will. I know…I know, “The Exorcist” is beyond horrific & it’s intensity is off the chart in some scenes but I believe it’s more plausible to be attacked by a shark than to find your daughters head being spun around as she f*cks herself with a crucifix after eating too much Pea soup…you know what I mean? So The Black Saint easily gives “Jaws” 5 shrouds for all it accomplished way back then & what it still achieves even today. No f*cking “Animal run amok” film is even in the same galaxy that “Jaws” resides in. It is still to this day an amazing f*cking movie.