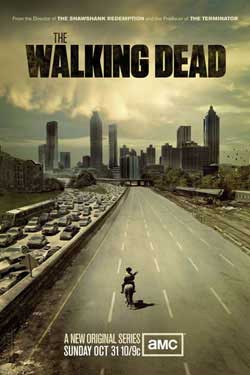 Police officer Rick Grimes leads a group of survivors in a world overrun by zombies.

To whoever sent the pilot episode of “The Walking Dead” to me – thank you! A million times.. thank you. As many of you I too started to fall in love with The Walking Dead by way of the comic book. Unlike most I didn’t experience it until book #60 was out. My iPhone comic book app from Image had the FIRST issue available to read for free. I have not looked back since. After reading that first book I picked up EVERY SINGLE ONE and I still do! Learning that AMC was going to turn this comic that could into a series I was, at first, cautious as I am sure many of you were. We all know where these things tend to wind up where something awesome is turned into something awesomely crappy. The Walking Dead, I thought, had the shot of being just that: garbage.

Upon learning the cast they were putting together in combination with the writers of the book and producer/director Frank Durabant I was getting that sensation in the pit of my stomach. That feeling when you are about to fall in love. Then they said Greg Nicotero was doing the make-up. Squee! This sealed the deal for me. San Diego ComiCon had a trailer and it blew up the Internet. AMC, seeing the response, greenlit a second season before the first was completed let alone aired!
Imagine my surprise when I woke up the other day and meandered to the mailbox in my snuggie to find an ominous envelope. I don’t know if this is something all companies do when sending out screeners to reviewers but I suppose it makes sense. True Blood did the same thing. What was inside was a disc.. that was it. I looked around me thinking; “crap – I’m in a spy novel”. Intrigued by this thought I went back inside and put the seemingly blank disc in the DVD player and hit play. The first screen came up (after the ubiquitous warning, of course) and I knew what had been sent to me.

I immediately hit stop. I felt wrong. Dirty. Somewhat cheated. I expressed my desire to review a copy VERY early on but being nobody I knew it didn’t hold much water. I figured the requests were just ignored and I was on some sort of “do not e-mail” list for being a psycho stalker. Then rationalization set in and it dawned on me that AMC, for the most part, is also a nobody on the block. They have sneaky hits like Mad Men and Rubicon.. they now had The Walking Dead. This adds another feather to their cap in winners because, let me tell you, it is. It comes on like a cute little lamb. No score to speak of. Rick Grimes walking down the road holding a gas can.. it went to hell from here and went to hell fast. This was just the hook! Even the title credits are creepy as hell!
The Walking Dead is a drama at its heart showing how normal people deal with a crisis and how they change or are forced to change. It happens to have zombies as a catalyst. Many forays in the world of “Zombie” have these nasty buggers as a character but not here. In The Walking Dead they are a prop. They are played off by the actors.

The Walking Dead pilot is everything that it should be. Drama. Humor. Blood. Guts. Destruction. Complete bliss for me as not only a lover of horror and especially zombies but as a lover of FILM! This is not just some sleek and slick television show with laugh tracks or applause signs. This is a series of short, independent films that are gritty and earthy and show the human spirit. It shows the inevitable change, one’s indignation in the face of insurmountable odd and the ability to fight. It also shows the power of belief, love, strength and foraging ahead not because you have to but because you need to.

Many adjectives come to mine. Awesome. Orgasmic. Brilliant. Stupendous. Somehow none of these even come CLOSE to describing The Walking Dead. A new word must be created. If you miss seeing this work of art then you must already be eating brains out of your neighbors cracked skull.
The DVD did blow up or disintegrate so I will watch it again tonight and perhaps a third time. I will also support this triumph by watching the debut on Halloween night. I will say that the characters are spot-on and there is never a dull moment to be had. Every emotion you can think of is present in this single episode and the shots they took were magnificent. This is what you can do when you have talented writers, producers and directors paired with a network that cares about the product and the fans. Thank you AMC for greenlighting The Walking Dead and thank you Greg Nicotero for bringing your brilliant work to the small screen. To Frank Durabant you are my hero just below Robert Kirkman.

As many will say after they see it.. I’m not worthy followed by a low growl, a gurgle in the throat then slurping as our brains are devoured by this Orgasmawesomilliantendous show..