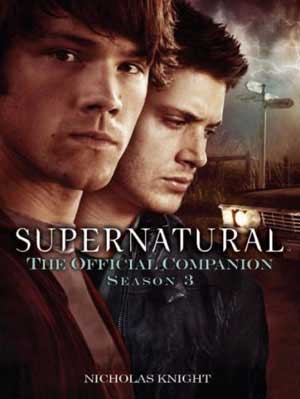 Well I suppose I’m starting backwards as I’m reviewing Season 3 before the first 2, but as all you Supernatural fans know each season is its own beast and season 3 is no exception. We are greeted by an introduction from non other than Sera Gamble, one of the main writers of the series. As we all too well remember this was the series before the 100 day lull and ever dreaded writers strike. So as series fans we got a little short changed with a mere 16 episodes which also had serious lulls between some of them. I often felt like we were jumping the gun and missing portions in between, however beyond all that it still was a pretty entertaining season. Nicholas Knight has been kind enough to dedicate his time to giving us fans a souvenir in the form of “Supernatural – The Official companion – Season 3”.

Now a quick flip through and you’ll know instantly that this is a definite book to own for Supernatural fans. A Color mid section among pages of descriptions, B&Whites, tips, break always, clever design and facts, figures and what not. Now I know what your thinking…. couldn’t we just get detailed synopsis on the internet? Well ya, but then you;d miss all the fun. For instance how about the breakaways sections that go over the lore and supernatural elements themselves as based on real reports and not just TV fiction? I mean the writers are clever…but all this stuff comes from other inspirations and myths as well. That what makes this series touch home and keeps it scary.

So for fellow travelers we know this is the season that should have been called “Dean goes to Hell. ” We knew that by the final episode he’d either of escaped its grasp or been sucked out of earth bounds to find a welcoming legion anticipating his arrival. Its no spoiler to say in the midst of our 4th season that of course Dean did get the Pinhead chains (so to speak) and did his time.

What I really dug about this book as that as viewers we really are given the insight on what the writers and crew had to deal with during this season. How about the upstairs network commands to bring in 2 girls, to make the show more lighted, to spend more money, and to stop spending more money. It’s a roller coaster of a journey not only in the fiction but the non fiction as well. A strike luring overhead and the pressure it put on the writers. Even the disappointments are interesting as they reveal the nature and goals that the show sets out for itself. Almost every page has a photo included. Though the real highlight of this book is in the discussions of the episodes. Of course we get a episode breakdown, but we also get a whole lot more. Behind the scenes info, FX artists details, writer notes, concept art are just a few. As each episode is tackled the writer has given insight from actors, writers crew members sand related on specifics for those episodes.

We are revealed the issues such as the cross road demon forced to where a dress in freezing whether, the challenges, the costs, the exploits of Ruby learning to fight on screen, the changes in direction on episodes, what they planned and where they took it…and much more. We find out what happened to Bella and the fans view of her role. We hear about the “trapped with demon” episode and how the writing became a challenge to inform fans and deal with a heavy background of mythology.

The tail end of the book features additional bonuses such as details about the comics series, a talk with the location manager, FX crew discussions and even books published that feature stories not seen of TV.

A perfect book for a unique and stressful shortened season. Highly recommended for Supernatural fans and new fans who want to get a whole pile of insight ………you’ll want to read it front to back in one sitting! a perfect addition to Supernatural fan libraries!!!!