Recently at NYCC I attended the Bruce Campbell panel, and for a few extra dollars he was doing signings in Autograph Alley. He knew how to work the room. Campbell is one ironic, sarcastic, charismatic people I’ve ever seen. It was amazing!

If you don’t know who he is or have experienced the magic that is Bruce Campbell than you’ve come to the right place. Here is a synopsis of his career and his achievements!

Bruce Campbell was born June 22, 1958, making him 52 years old today. He grew up in Royal Oak Michigan and began acting as a teenager, making small super 8 mm movies with his friends. He met Sam Raimi in high school, shortly after meeting they began working together collaborating on the first Evil Dead film. Which only took 12 weeks to shoot but years to actually finish. Following an endorsement by horror writer Stephan King, the film slowly began to receive distribution. Four years following its original release, it became the number one movie in the UK. It then received distribution in the U.S., spawning two sequels: Evil Dead II and Army Of Darkness.

Several years later I was exposed to him, notably in his various roles on Xena: Warrior Princess and Hercules: The Legendary Journeys. He played Jack of all Trades, even spawning his own television show that ran briefly in 2000-2001. He is also known for his supporting role as the recurring Autoclys (“the King of Thieves”) on both Xena: Warrior Princess and Hercules: The Legendary Journeys. He has appeared in several other television shows including: The Adventures of Brisco County Jr. (a sci-fi western comedy!), he had a recurring role as “Bill Church Jr.” on Lois and Clark: The New Adventures of Superman, he also had recurring guest roles on the show Ellen, Homicide: Life on the Street, the X-Files, Charmed, and American Gothic. He has also starred in commercials for Old Spice highlighting what a smooth operator he is.

Other cult film roles Campbell has been in include: Bubba Ho-Tep, My Name is Bruce, Crimewave, Maniac Cop I and II, Congo, Sundown: The Vampire in Retreat, Escape from LA, McHale’s Navy, Cloudy with a Chance of Meatballs, Man with the Screaming Brain, Sky High, Alien Apocalypse, the Coen Brothers movie: The Hudsucker Proxey, and a lot more. His filmography list is huge, visit: www.bruce-campbell.com/resume.asp to see a list of all the movies Campbell has been in.

Besides starring in B movies as well as some major ones, Campbell is also know for his cameo roles. Most notably his cameo’s in the Spider-Man movies directed by Sam Raimi. He played the ring-announcer in Spider-Man, a movie usher in Spider-Man 2 and a Maître d’ in Spider-Man 3. His other cameo roles include: Escape from L.A., Darkman, Aqua Teen Hunger Force Colon Movie (he was the voice of Chicken Bittle), The Majestic, Timecop, Cape Fear, Fargo, Intolerable Cruelty, Lady Killers, Congo, Robot Chicken (he was in the clip titled “Morning Wood”), From Dusk til Dawn 2: Texas Blood Money, and was a villian in My Life as a Teenage Robot.

Other than being famous for his outstanding character, it’s his voice that can also light up a room. Campbell has also provided his voice acting talent to several video games and animated features. He provides the voice of Ash in three games based on the Evil Dead films; Evil Dead: Hail to the King, Evil Dead: A Fistful of Boomstick, and Evil Dead: Regeneration. He also did narrator work on all of the Spider-Man games. Most recently he provided the voice of the Mayor in the 2009 film Cloudy With a Chance of Meatballs.

Campbell has written two books his autobiography, If Chins Could Kill: Confessions of a B Movie Actor and Make Love the Bruce Campbell Way. His character Ash is also in several Comics include the Marvel Zombies series.

At his panel during NYCC he also said he’ll have another book coming our way in the near future.

Most recently to date Campbell stars in, the #1 show on cable, Burn Notice as Sam Axe. Sam Axe is a former Navy Seal and unlicensed private investigator and occasional mercenary with Micheal Westen, the show’s main character.

He’s also confirmed a sequel the parody of his career, My Name is Bruce. It will be titled My Name is Bruce 2: Bruce vs Frankenstien. He told us all at the panel that it is going to be the “Expendables of horror movies”. Hopefully it will be. 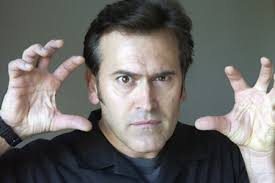 To learn more about the legend or to see where he’ll be appearing next visit: www.bruce-campbell.com/

It’s his official website and trust me, you won’t be disappointed. Also check out some of his movies, chances are there’s something you’ll find mystical and deeply appealing about his performances. Fans new to Bruce Campbell make sure to check out Evil Dead, the movie that started it all.

Here’s to hoping he’ll be appearing at New York Comic Con next year!