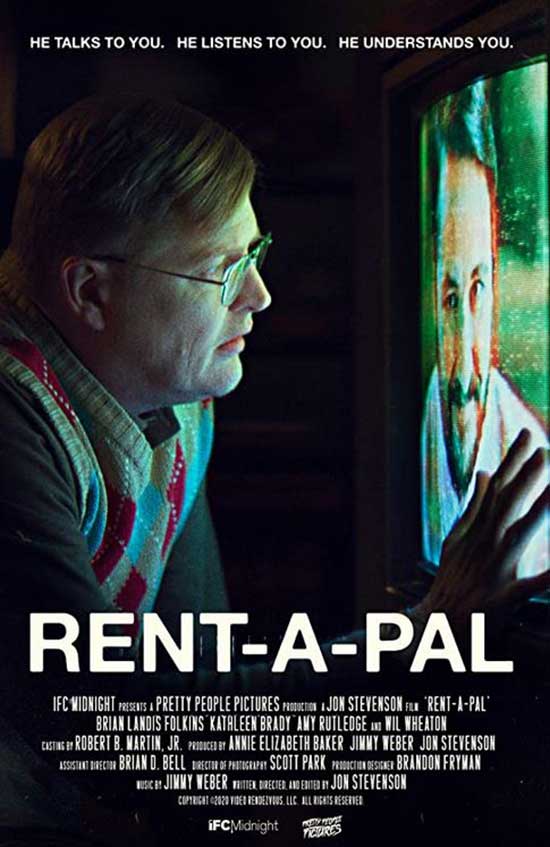 1990: David, 40, looks after his dementia mom. He uses a video dating service to no avail. He buys a “Rent-A-Pal” video tape and things change.

Written and directed by Jon Stevenson (Eat, The Release), who is just so talented. The film opens with a TV that goes to static. This was before digital, before Blu-Ray’s and you had to “Be Kind, Please Rewind” those VHS tapes that we all rented, “back in the day.” We meet, David (Brian Landis Folkins), and he’s looking for a date. He’s watching the VHS video submissions, and now there are dating apps. Technology is wild.

David is sort of sulking and he lives with his mother, Lucille portrayed by Kathleen Brady. She is a tad curmudgeonly, and has dementia. David stays busy by taking care of the house, he does work in the yard. The eeriness and the score playing in the background gives it some extra creepiness. David decides to call the dating place to see if he has any dating matches. They advise him to come in and film an updated video.

David delivers this heartfelt speech and then the cameraman tells him, that the videos are only thirty seconds. He had to do it again, and he sort of stumbled through it. David’s had enough for one day. He notices a bin with VHS tapes. He finds a Rent-A-Pal video. The writing is brilliant and scary at the same time. The world we live in now where it’s 2021, and some of us are still working from home or being quarantined. This is a scary concept.

Brian Landis Folkins is intense in this role. David brings the Rent-A-Pal VHS home and he pops it in the VCR…. Okay, I had to pause the movie. Back in the day, we had VCR’s. You would get the VHS which is a “Video Home System” and it allowed you to watch the movies in a VCR which is a videocassette recorder. You also had to pray some times that the VCR was always working and wouldn’t eat the tape. (My Atari blew up when I was a kid. We had all sorts of weird stuff happen in the one house we lived in.)

If you frequented Blockbuster, you know the old, “Be Kind, Please Rewind.”

Okay, back to Rent-A-Pal. David turns the TV on and a SUPER ENTHUSIASTIC Wil Wheaton who was part of so many of our childhoods. Amazing films that stand the test of time, Stand By Me, The Secret of NIHM, Star Trek: The Next Generation, Toy Soldiers. Wil Wheaton’s character Andy sounds optimistic. The video is interrupted by a possible kitchen disaster.

David takes a break to watch a Gary Grant movie with his mom, Lucille (Kathleen Brady). She shares memories. It’s sad, she doesn’t remember. The funny thing is, Lucille doesn’t remember her own son but she semi-quotes the movie. I read many articles in regards to dementia and people who remember songs or movie lines. It’s funny.

David seems lonely and frustrated. He cleans up, helps get his mother to bed, and heads back to the sofa. He turns the TV back on and OH, here’s Andy, he is in like Good Guy doll mode, “friends till the end.” You half expect Chucky to pop out but he has this unnerving enthusiasm. Wil does such a great job playing this character.

The Rent-A-Pal video sort of allows you to interact with Andy. He asks questions and then you answer, and then you say whatever you want to say. David’s frustrated sarcasm drops the more he listens to Andy go on and on about his unpleasant life at home. Nope, too soon, Andy said something and David turned the TV off.

David is getting a projector out now and well; those are not home movies. David wakes up and hears from Diane (Adrian Egolf) at Video Rendezvous. She has some good news for David, but it didn’t last long. David still wants to know who is on the tape. It’s Lisa (Amy Rutledge) and David looks even more disappointed.

David goes back to put the Rent-A-Pal VHS in and Jon Stevenson gave a glimpse of the VHS tape starting. Andy listening with intent on TV is strange. It’s almost like he’s sitting there with him and not on TV. Andy offers advice and shares stories.

David rewinds and rewinds again. He watches Rent-A-Pal over and over. He’s ironing, cleaning up and even quoting Andy. Andy even brings a camera out to take pictures. David is getting slightly obsessed with this Rent-A-Pal tape. He should take a break, go for a walk. Talk to anyone but the TV tape.

David starts to share some traumatizing stuff with Andy. Andy and David are sharing all these stories and it gets weird. Diane calls David from Video Rendezvous to tell David that Lisa is available now. They go roller-skating and then dinner. David kind of talks to Lisa like he was talking to Andy. Lisa tries to explain balance and keeping things in perspective.

David finally looks like he’s relaxing a little and having some fun with Lisa. This seems to be what he needs. Being happy, being in love. It’s a beautiful feeling. He should avoid Andy but he wants to tell Andy all about the date. Why? WHY? Andy is toxic for David. David should turn this tape off. The way Brian Landis Folkins leans in to the TV and looks at Wil Wheaton’s face and moves his head to match Wil’s, and then hugs the TV was such a beautiful acting moment.

Oh boy, it gets worse. David misses out on a date and his mom is missing. Jon Stevenson put so much in to this film. The details and things that he shows. David seems much happier with Lisa. Lisa winds up helping David. There is this psychological distress that Andy causes David. He loses himself to Andy. Brian and Kathleen deliver powerful performances.

David becomes enraged after there is an accident with the tape and he takes it out on Lucille. This movie makes me want to talk to everyone I know. It’s disturbing but in a good way. The way a movie should make you think. David goes to extremes. Jon Stevenson did an excellent job.

Rent-A-Pal is a great psychological film. I would recommend checking Rent-A-Pal out.