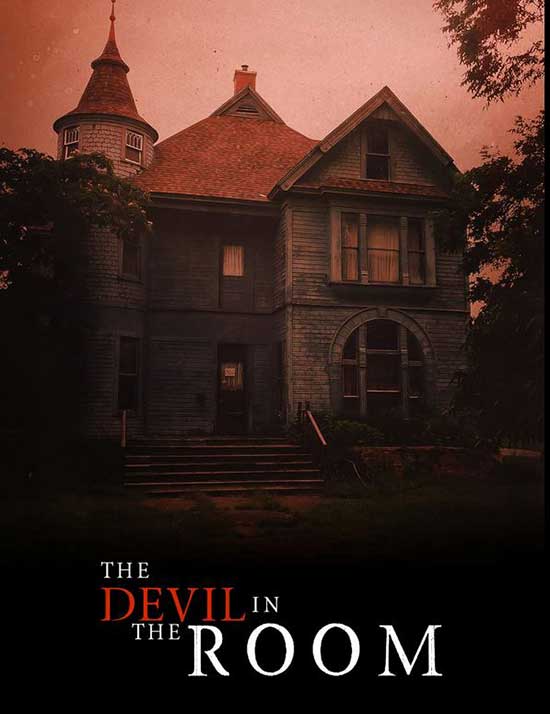 A young couple look to prevent an evil spirit from trapping their souls in the realm between sleep and reality.

There’s something to be said for brevity in horror; many a potentially good movie has been weighed down by an excess of plot padding and obvious exposition, two things that can kill any building tension stone dead. On the other hand, a film that’s too brief can struggle to develop any sense of weight or realistic characterisation. The Devil In The Room, a 2020 effort from co-directors Brendan Rudnicki and Sami Cunningham, which clocks in at a very lean sixty minutes including credits, definitely leans towards the latter of these two traits.

The movie opens with a short prologue, in which a woman named Jenny (Kate Darby) attempts to alleviate her obvious and rising panic by taking a relaxing candle lit bath. Unfortunately this doesn’t quite go to plan – within seconds she has developed a nasty case of pinkeye (or rather contacts suggesting demonic possession) and decides the finishing touch to her hot bath would be a live hair-dryer dropped into the tub with her.

Next up we meet the recently deceased Jenny’s sister Amanda (Skye Coyne) and her dashing boyfriend – and as he reminds us at every turn, soon to be partner in a law firm – Cameron (Isaac Gonzalez Rossi). Distraught over Jenny’s suicide, the couple undertake the sorry task of clearing her house and sorting through her possessions, many of which were acquired during her extensive travels. One of these happens to be a small, sinister looking black totem, which of course they proceed to take back to their house (which happens to be an incredible designer pad, valued at more than the GDP of a middling South American nation – being a trainee lawyer must pay handsomely) and give it pride of place.

By this point we are over a quarter of the way through the movie, and almost nothing has happened – other than a couple of hefty exposition dumps, a few creepy strings and the odd cheap jump scare. Things can only get better, right… right? One of said jump scares has Amanda seeing a disturbing demonic figure in her dreams – or at least it would be disturbing if the demon didn’t appear to be wearing a Frank from Hellraiser mask, right down to the stripped flesh and exposed cheekbones! Frank’s appearance is the first of many; unfortunately this sets up a pattern of repetitious scenes whereby Amanda does tasks around the house in her waking hours, then falls asleep, before being jolted awake by Frank shouting “Boo!” at her from a mirror or around a door frame – you know, the usual. These jump scares are often accompanied by the now obligatory screeching violins (Insidious, you say……)

It turns out that Jenny’s little figurine has brought back an unwelcome visitor with it, in the shape of a ‘litch’ – a demonic entity that has attached itself to Amanda with the intention of driving her to suicide just like her sister. Amanda ends up receiving conflicting advice about how to deal with this situation from two different therapists, both of which appear to be completely cuckoo.

Sometimes it feels like you’re railing hard on a movie unnecessarily, but in Devil In The Room’s case there really is very little else going on here. Seriously, in a film that clocks in at under an hour there are repeated, detailed scenes of characters brewing coffee, making up fire pits and other thrilling activities; the meat of the story could probably be sketched out on a side of A4 paper. To be fair there is some nice camerawork and photography on show, with good use being made of the impressive locations; and there are a few dabs of reasonably impressive practical gore on show. Unfortunately this is largely countered by some choppy editing, which makes the movie feel jumpy and uneven, and some rather amateurish acting.

This might have made for a reasonable twenty-five minute short for TV, but even at an hour there’s just not enough substance to fill the running time. And while I’m certainly not opposed to a deliberately ambiguous ending, having one of any description is generally a good thing – and that isn’t really the case here. Difficult to recommend unless you’re really stuck for viewing unfortunately; at least it won’t take up much of your time.